You are here: Home » COACH PORTFOLIOS » Power Tools » Failing vs. Route to Success was rejected from the University of Southern California School of Theatre, Film, and Television… three times! Whilst he did eventually attend school at another location, he did so only to drop out to become a director before finishing. He didn’t give up however and 35 years after starting his degree, Spielberg returned to school in 2002 to finally complete his work and earn his BA.

was told he lacked creativity.

One of the most creative geniuses of the 20th century was once fired from a newspaper because he was told he lacked creativity. Trying to persevere, Disney formed his first animation company, which was called Laugh-O-Gram Films. He raised $15,000 for the company but eventually was forced to close Laugh-O-Gram, following the close of an important distributor partner.

Desperate and out of money, Disney found his way to Hollywood and faced even more criticism and failure until finally, his first few classic films started to skyrocket in popularity.”

had it rough as a child, being taunted in school and constantly in and out of foster homes. As an adult, things didn’t improve as he was unable to earn a steady income and even had to sell his dog for $25.00 to help pay his electricity bill. It was only 2 weeks after selling his dog that he wrote the Rocky script in nearly 20 hours straight. After being rejected over 1,500 times (that’s more than Edison’s failure!), Stallone was given a nod by United Artists for $125,000… but only if Stallone would not star in it. Stallone refused. Even when he was subsequently offered $250,000 and $325,000, he still refused as he wanted to star in it. He finally reached a compromise, starring in the film but only taking $35,000 and a percentage of profits as a concession. What was Stallone’s first purchase with his $35,000? His beloved dog, for $15,000!

was technically a failure as a college dropout, a fired tech executive, and an unsuccessful businessman. At 30 years old he was removed from the company he founded. In a 2005 commencement speech at Stanford University, Jobs explained, “I didn’t see it then, but it turned out that getting fired from Apple was the best thing that could have ever happened to me. The heaviness of being successful was replaced by the lightness of being a beginner again, less sure about everything. It freed me to enter one of the most creative periods of my life.”

Failing vs. Route to Success Explanation

Failing is commonly defined as a lack of success in some effort; a situation or occurrence in which something does not work as it should.

Failing tends to have a negative connotation. It is associated with undesirable behaviors. From a young, children have been rewarded with winning (rewarded with medals, prizes, and holiday trips) whilst those who do not end up on the winners’ podium have nothing to show for it. When you turn on the TV or read the papers, you see people being celebrated for coming up tops, for winning. Consequently, criticism often accompanies failure. Subconsciously, our brain has been hardwired from a young to associate failing as a negative outcome.

Failing is frowned upon. 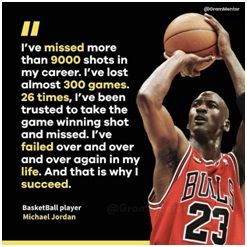 Producing success means to cause a particular set of positive outcomes. Other common phrases describing producing success are “meet with success”, “make it”, “get a job done”. All these phrases are positive, encouraging, and lifting. It is akin to being on the winners’ podium.

BUT, when you drill down to successes, it is rarely the case that someone achieves success on the first try. A child will never learn to walk if the child has not fell. A research paper would never be completed without endless editing (i.e., correcting of mistakes, God forbid the word “failing”).

However, people do not speak about failures that come before success, despite that someone can rarely succeed without first failing.

What if, failing is not the end of it, but merely a step to Success?

Failure is not BAD; it’s not only an excellent stepping stone to success but also an essential step to success. We never learn to move out of our comfort zone if we don’t overcome our fear of failure. Worse, we play safe because of the fear of failure.

The most progressive companies deliberately seek employees with track records reflecting both failure and success. That’s because someone who survives failure has gained irreplaceable knowledge and the unstoppable perseverance born from overcoming hardship.

Here’s are some benefits of failing:

What does not kill you, strengthens you.

This is a phrase that has been often heard. It is a cliché but often there are truths behind cliches.

The child that goes through a strict and tough upbringing often is better equipped to deal with what society has to throw at in adulthood. The athlete that has failed and repeatedly stands up again will eventually stand at the podium one day.

It is a true measure of a person when faced not with success, but failure. How do you measure up when the going gets tough and mud gets thrown on your face as you stumble towards the finishing line? Do you stay down and give up? Or do you just brush off whatever is thrown at you and treat the obstacles as challenges to keep your competitors from getting the same goal as you?

Just ask the mouse that figures out the way out of a maze. It is not through sheer luck or superhuman/ “super mouse” senses that one figure out the way.

Instead, it is through failure and hence know where NOT to go.

When you fail enough, you are just getting that much closer to success. And when success happens, you just know that it is going to be sweet.

Failure Gets Rid of Fear

In her address, J. K. Rowling says, “It is impossible to live without failing at something unless you live so cautiously that you might as well not have lived at all – in which case, you fail by default.” There is no real alternative to failure.

If you want to be a successful entrepreneur, you must test new ideas and take risks. That means you will have a failure, but if you learn from each failure, you will be taking smart and calculated risks that improve your chances of success.

What is often not emphasized enough about failure is that failure should not be taken as a singular event.

Instead, failure is merely a step in a line of actions towards success. Following right behind failure is careful analysis and reflection. Real leaders never let themselves be bogged down by failing. Instead, they quickly reflect and analyze what causes the failure and they then move forward to rectify the mistakes that led to the earlier failure. Such haste towards failing is also known as “fail fast, fail early”. As the term suggests, it encourages taking risks early in the process. Such risks result in higher “failure” rates, but it will be foolish to judge the process by such “failures”. Instead, what this approach brings is a mentality to explore, experiment, and consequently rapidly rid the causes of failures at an early stage of the process.

Failure is an Opportunity

Sometimes, we get mired in the current state without being able to progress. From this perspective, failing allows us to hit the “reset “button.

The foundation of a successful coaching relationship is trust. This environment of trust is essential for the client to explore beyond the comfort zone and open up different ways of thinking and perceptions.

To shift the client’s perspective from a “negative failure outlook” to a “stepping stone to success perspective”, coaches need to support them to explore different perspectives. Coaches can support clients to identify what are the limiting thinking that is preventing them from looking at things from various angles.

Questions to switch the perspective from a negative “Failing” outlook to “Producing Results” as a stepping stone to success are:

Failure Is the Route to Success

Many clients come into a coaching session describing an experience of failure. The client will often come into it with a limiting mindset and feelings of being “trapped”, “useless”, “disappointment” set in.

Society has trained us to have a binary view of success vs failure. When in reality, this cannot be further away from the practical truth. Failure is the route to success. The more we fail and the more we can learn from our failures, the better the chances of success. Success is the end of a road with several milestones. These milestones repeat and are called failure, reflect, analyze, and failure repeats… until success.

Failing deserves to be celebrated as a milestone of progress. Failure should be discussed in what it brings to the person i.e., strength, learnings, values. Failing is positive.