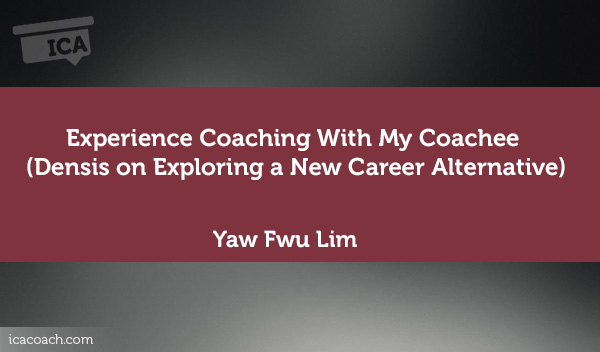 Many people have come across a cross junction whereby when reaching a certain stage and not know where their direction and their next goal will be like.

One of the Coachee, Densis Tang having working in security industry for almost 25 years of his career in operation and need a switch of his career.  As Exploring Career change is a not an easy task for him due to his age and in mid-year crisis.

My coachee had reached a plateau in the company he was working with and was looking for something that can enhance on his next career advancement.  But he was unsure on what career switch can be more appropriate for him as he only skills is in security operation. Having this worry is not surprise as he had to think twice about the financial impact of making a change as his family had to rely on him since he was the primary breadwinner. Not only that his wife is not working as his child is still young. Now he is in a dilemmas stage where he had to choose between career moves on stick to his stable job.

We started the engagement in a conversation with my coachee on his currently situation and his profile. Later we start having an assessment that gave my coachee some insights to how he works best with his strengths. He had some quick recognition via the assessment that his current position did not really utilize many of his natural behavioral strengths, such as taking initiative by him explaining why he had been feeling frustrated at work.

It also gave him a good overall view of himself and also on the types of organizations and roles where he would be most comfortable. Furthermore also look into what factors were most important for job fulfillment like being able to lead people and projects, being a valued as part of a team and having the ability to influence decision-making.

We went into the self-exploration phase of the coaching, and my coachee did some deep reflective thinking and explore into various options of list of potential career elements that were important for him.  The coaching session discover some new career options, since he frequently deal with people which include manpower and training which would utilize his expertise and potentially place him into a more fulfilling environment.

We began to analyze how his skills and experiences would fit into these types of positions, and layered in his work and life needs, including financial considerations.

By exercises some of the Career choices through prioritizing into rank and coaching him to spent some time to research these options and tools to test them out informally.

At this point in the engagement, he began to realized and understand of the types of positions that he was excited to move into. With enthusiasm for what his future career would look like.  He began the active process of networking with educational institution, headhunter and job search.

Our coaching continued with personal profiling, branding and job search strategies. This entire process took approximately four sessions over the course of one month period.

At the end of the engagement, my coachee start enroll into a training course that require him to be train as a certified trainer so that to prepare him for his next career move.

As his training will took him approximately 3 to 6 months to complete and now his current employer having known that he took up a trainer course had decided to even sponsor him for the course and once he graduated they will offer him transfer him to training and development department to explore for his next career opportunity.

With this, my Coachee find that his life was more positive than it had been in years. He was excited to move into a new career path. In addition, the insights he had about how he works best and his new enthusiasm for his work is ever more exciting than ever.

He then had a candid conversation with his superior and was able to take on some new different responsibilities which were in line with what he most enjoyed doing. As a result, his happiness in his current position increased, and the he felt that his work is more meaningful than ever to be.

He intended take away his idea of looking for outside option like finding another job whereby he now have found his goal in life. He even mention that even if one day he decided to leave the company he still able to fulfill his financial obligation to his family as a trainer with other company. At the same time he was motivated to continue to improve what he could in his current position.

Finally he reported that the coaching had been a wonderful opportunity to learn about himself and it is like a mirror that enable him to find out more of himself and reflect on what his strength he have as he never thought about it for so many years.

This coaching had given me as a coach to explore on which are the areas of opportunity to improve on. During the process of coaching, it allows me to learn how to get feedback from the coachee and as well as ask powerful questions and active listening rather than giving suggestion or advice. It enable my coachee the opportunity to speak up and explore and discover themselves.  Building trust is another application that assist me to create the trust between my

coachee and myself so that to inspire and experience the relationship with my coachee. Another observation is that I need to improve on is that we must not be judgmental and always be open minded when speaking with the caochee. Like the iceberg theory that we must not look things on the surface and do not give straight away answer or conclusion to our coachee. As people come from all walk of life from different culture, gender, background, life or working experience.