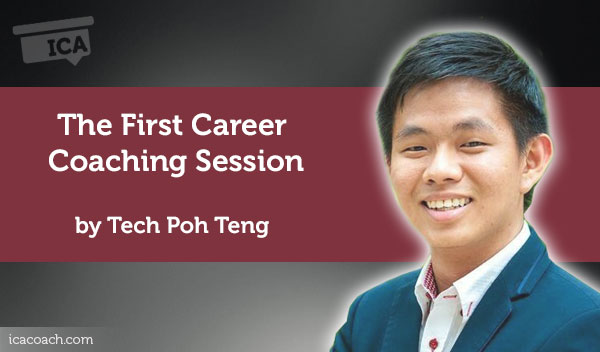 Veronica graduated from the course of Material Engineering from a top university in Asia. She subsequently landed herself in a job of Quality Assurance role within manufacturing industry. After 6 months of working life, she started to ask herself that is this her dream job, or rather, what would be her future career path like.

Luckily, she remember that one of her secondary school friends has just completed his Career Coaching Certification course. Hence, she decided to look up to her friend Traven to find out how this friend could help her in her career management.

During the first career coaching session, Traven understand that Veronica may not be familiar with what Coaching is all about. With that in mind, Traven started the first session by sharing with her what coaching is and what coaching is not. Thereafter, Traven set the expectation and the objective of the session upfront, informing that Veronica would have the right to decide on her desired outcome of the session. More importantly, Traven established the trust and rapport by highlighting to her that all conversation will be kept in total confidential.

When asked on the key issue that Veronica would like to be coached on, she mentioned to Traven that she is not clear of her future career path and would like to seek for the coach to help. Traven first used the ‘wheel of life’ tool to find out what truly matters to Veronica. She then took the time to give it a serious thought and listed down the eight areas of her life which value the most. With that, she found out that work life balance is an important factor in her career planning.

In her current role, she has to work long hours which causes her to have less time for herself and her family. Through the coaching process, she gain the awareness that it is not the job that she is not happy about, but rather the work hours which subsequently affects her work life balance. As she continued to share her ideal career, Traven actively listened and found out that she has an interest in education/teaching as well, which she wasn’t aware initially.

Through the career coaching session, Veronica has first understand what coaching is and how coaching can help her to find out her career path. With the trusted space for her, she is willing to look into herself and found out her calling in life beyond working in manufacturing industry. After gaining the awareness, she is now able to plan her career path for the long term, knowing what is truly important for her, while crafting out her dream career.