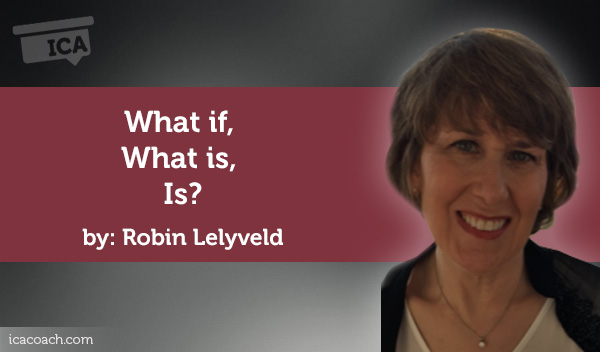 The main players in this case study are my client, Lynn, and myself as the Coach.

Lynn is a very bright woman who has worked for the government for 30+ years. Lynn used our first coaching session to talk about her frustration with her boss of 2 yrs.  She spoke of his “not being friendly or pleasant and feeling invalidated and not supported by him.” She is hoping to retire in about 5 yrs. and wonders if she is able to tolerate what she refers to as a “toxic work environment.” She is hesitant to make any changes to her work situation, other than to continue to “work harder” in hopes that her boss “might respect her more.”

Lynn used the second session to talk about her being angry with her husband following an argument the night before. The issue has to do with Lynn’s feeling that “her husband puts his mother first”, before her. Lynn stated that it is an old issue that she has not been able to resolve. For the last 20 years, her husband spends every Sat. going to his see his parents at their house. Lynn has become increasingly angry over the years,and has stopped going to her mother- in laws house entirely. It has become a sore spot between the couple that neither Lynn nor her husband care to discuss. Lynn admits to “wanting her husband to put her first” and to prioritize“their” family first, and then his parents, which her husband is unwilling to do.

In the first and second session, I reviewed  what coaching was and  reviewed confidentiality and the importance of a safe space. In all three coaching sessions, some of the coaching skills that were used included engagement, powerful listening/powerful questioning, acknowledgement, visualization, releasing judgment, detection of underlying beliefs, emerging awareness and action planning.

After the second coaching session, I was beginning to see a similar pattern emerging. Lynn was wanting to change her boss and her husband.  There were two different stories, that featured perspectives that were not possible.  I didn’t feel  that Lynn had got on what she needed from the coaching and I sensed her frustration. In the moment, I wasn’t able to help Lynn shift her perspective. What was needed to move the coaching forward, was an observation to help normalize the situation which would allow Lynn to consider a shift in her perspective with re: the two situations she was struggling with. Without this, I realized Lynn would be left feeling if she only had one more tactic she could fix the situation or that I could possibly change her husband and her boss, both of which were not true or possible.

In the third coaching session, Lynn started to talk about her boss and how she felt like an outsider in the office.  This time, sensing her frustration, I shifted my strategy and offered an observation.

Coach: I have heard you talk of what you need from your boss and desire for him to be different. I am wondering what if you can’t change him (or your husband) or anyone else. What is this like to hear?

Lynn:  “You are right.” She acknowledged.

Coach: “I don’t hear acceptance in your voice, I hear frustration?”

Lynn: Change myself as a first step so he sees that I am trying to be more proactive.”

It was after this exchange; Lynn was able to see that she was stuck in a box of her own creating. She was looking for the other person to change before things could get better, rather than seeing herself as an agent of change. She really appreciated the notion of her “being in the box” that I offered and her emerging awareness, so much so, that she began talking about how she not only wanted to “get out of the box, but wanted to consider “how she could jump out of the box!

The third session was definitely the most helpful for Lynn. I feel that Lynn experienced a shift in her perspective and this helped her gain a better understanding of what she could do to empower herself as well as how the coaching process actually worked.

There were several takeaways from my three sessions. First, there is the importance of the client’s understanding up front what Coaching is. The Coach is not the expert as may be found in a more counseling or a therapeutic setting. As mentioned before, the expectation is that “the client is resourceful and creative and whole” and able to do their own problem solving with the help of the Coach. If the Client does not understand what coaching is, the client may look to the Coach for answers or to provide them with options or resolution, which is not the role of the Coach. To prevent this dynamic from happening, it is important that the Client at the outset, understand what to expect from the coaching process and that it is their responsibility, not the coach, to come up with their own creative solutions.

Second, frustration is an important word in coaching and serves as a clue to think Emotion. When the client is feeling frustration, it usually means a person is blocked from reaching their desired outcome. The person is usually refusing to accept some reality. When we reach our goals we are pleased, when we are prevented from reaching our goals we feel frustrated and irritable. Frustration tells us that a perception or strategy is not working for us, i.e. Lynn was still wanting to change her boss and change her husband, neither of which was possible.Once I offered an observation, and stayed curious, it normalized the coaching conversation. It served as a truth and acknowledgment. This allowed the client to move forward and consider a more positive re-frame, how she could feel more powerful at work rather than feeling powerless.

Another takeaway, when the client talked of wanting her husband to put his mother first, this goes to the heart of coaching. We as coaches take no sides. This is merely a perception that the client has.  During both sessions, I had the feeling that the client was trying to “get me to see her side” and to “align with her” re: her boss and her husband. We cannot agree with someone’s perception and coach someone effectively. We can understand their perception, although tempting, we must not fall into the trap of agreeing with the client, even if we share similar values or strong feelings on a subject. By doing so, we are not helping the client.

Thirdly, we may find ourselves  eager for  our clients to move forward and to help them solve their own difficulties. However, we must be able to “hold that as an intention and then let go of it.” By using an observation, such as “I am noticing a pattern…. Or I am hearing some lightness in your voice…what are you feeling?  What are you experiencing? What do you see about that? That would be the best way to move forward with the client’s agenda, so that there is no intentional “push” on the part of the Coach.

Lastly,  “when someone shows you who they are believe them!.”