You are here: Home » COACH PORTFOLIOS » Case Studies » Coaching Case Study: On Choosing a Similar Consulting Job vs A Role 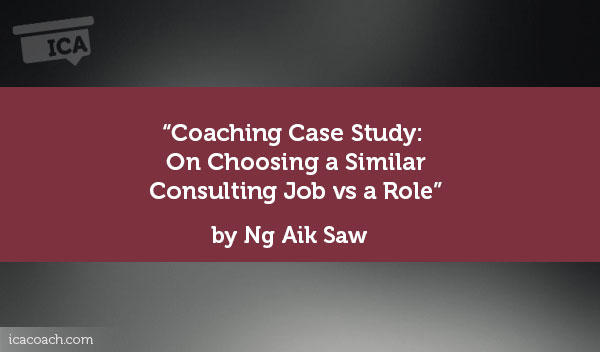 The Agenda and the Coachee’s Problems

Mr Koh is a senior purchasing manager from a Multinational Company.  He was retrenched from work recently when the company downsized its team locally.  He had gone through several interviews for around 3 month time and there was no success at all.  He had feedback that he had met and fit all new jobs requirement but feel that there seems to be some problem during interview time.   He had not offered any jobs since then.  He would like to have coaching session to find out exactly what had gone wrong.  He strongly felt that the issue should lie around the interview process and this is his agenda.

He had worked as senior mechanical engineer for 15 years before promoted to head the purchasing team. He accumulated plenty of experience in leading technical team and thus he has a lot of technical knowledge compared to other purchasing manager.  He is quite clever and is fast in analysing problem and come out with proper solution.  He is always admired by his team for this talent.  He feel that his capability is always rated highly by his boss and sometimes it is alright to put others down when he think necessary.  Throughout the remaining 10 years, almost nobody in purchasing team is able to match his skills and overall competency.

Coaching: Core problem – The start to unravel coachee’s inner self –

Following the proper one to one coaching session, I started by asking him some questions on how his earlier daily office works. He had answered pretty confidently how he had tackled difficult situation and successfully savage major projects from failure.   He was full of energy and pride when talking about his achievement.   I had also requested him to explain in more details on how the interview was carried out and what type of questions was asked.   He had explained in details all those questions asked and he is convinced that his answers are superior beyond what the interviewer had expected.  It is from this time that I realized there must be something went wrong in this case.   In some occasion during first sessions, he had shown that he is bit impatience when he was asked a few times to explain in very details about his work.   It is through this discovery that I had directed more questions to seek further understanding on his attitude, belief and values in work among this colleagues and teams.

After more probing, I found out that he sometimes cannot tolerate people who think and behave slowly in understanding his points.  His character is a bit proud and had shown frequently during the coaching session.  I had pointed out to him about these findings and invited him think carefully whether he really realised about it.   He is neither sure nor convinced and we closed the session by inviting him to relook into the past and most recent events to see whether these feedbacks are agreeable.

In second session, I seek his acknowledgement about the findings and explain further that the subsequent session should continue to unravel more about on his response and approach during conversation especially during interviews.  With his agreement to follow on this agenda, we started to prepare list of questions and answers as he can remembered during the last few job interview sessions.  We did role play where we take turns to be interviewer and interviewee.   I took all videos and showed to him that where he could see his reactions and behavior during the play.   I had questioned him whether his altitude shown in video is acceptable assuming he is the employer. He slowly realised that his dominant and intolerability character in conversation should be the major factor in putting the potential employer down.

I had invited him to have a serious thought about the impact to future interviews and the success rates.   It is though this session that he agreed that he need to change to show potential employer that he is more approachable and adaptable when coming into new environment and working culture.   I had also checked with him on how to show more gratitude to people around him.  He had gladly feedback that he is appreciative to all findings so far.

During the 3rd session of coaching, we focus on working closely to help Mr Goh to develop a friendlier appearance and style of talking.  He adapted more listening and pause during discussion and less interrupting to others when disagreement arise.  He had made considerable effort to be more patience and willingness to accept different views.

Coaching: Changes in behaviour and well prepared for the next Interview

After 3rd session of coaching for a period of 1 month, he started to show more consideration when talking to others.  He will take more time to explain his point rather than assuming others will understand his points automatically.  He also show more gratitude by saying ‘thank you’ with more pleasant tone and smiling face during conversation.  His interpersonal and conversation skills had shown considerable improvement.     He is now very much more prepared for the next interviews when it comes.

He had feedback that he valued the coaching process as this really help him to understand his self honestly and improve further with his own direction and content with good coach support.