The lights had dimmed, the spotlight was fading away from me and the microphone was placed perfectly for my voice to be deftly carried across the hall filled with several members of the forum. It was my last address as the outgoing president of the forum. I was voted out in the recent elections and the time had now come to step down from the position of power and fame and welcome the new president to the forum.

In order to move ahead in our lives we must be willing to accept life in its myriad forms for what it is rather than for what we want it to be or what we imagine it to be.

Acceptance is described in the dictionary as, “the act of believing or assenting as true.” It is indeed a strong catalyst that brings about change and transformation in an individual. It is the faith that despite the circumstances, all is well.

However acceptance doesn’t mean that you give up or give in. It just means that there is a shift in reality and that we believe it for what it is.

Billy and Sara were colleagues in the same organization. Sara joined as an intern and was named a manager in a meteoric time of 18 months due to her outstanding contributions to the organization.

However her transition from an individual contributor to a people manager took a U turn since she had an uncanny knack of upsetting the apple cart by radically altering most well defined critical processes just because she felt the need to challenge and change EVERYTHING.

The impact was detrimental both on productivity and morale of her team members. Two of them resigned and moved to other organizations and the remaining three applied for a transfer to another team.

Billy, a senior HR leader was summoned urgently and assigned the task of supporting Sara overcome her managerial challenges and help improve her performance.

Initially Sara lashed back at Billy and refused to accept any feedback about the recent turn of events that had occurred in her team. However Billy remained patient and perseverance while he enabled her to think aloud about her actions that were impacting her as well as others. He slowly helped her visualize that she was sinking into a dis-empowering state by living in denial. 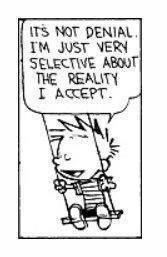 Denial is described in the dictionary as, “the act of refusing to admit or acknowledge.”