What is a coaching model?

I developed the C.O.A.S.T. Coaching Model after observing my interactions with clients in over 70 coaching sessions. My vision of the coach/client relationship is one of partnership and sustainability in that clients maintain their progress and momentum after coaching sessions . . . to coast in a sense and continue to move forward in life. Sustainability in coaching is a strong value of mine and one that I encourage the client to embrace.

The C.O.A.S.T. Coaching Model process focuses on creating a safe space and trusting environment which will support the client in building self-awareness and positive growth. 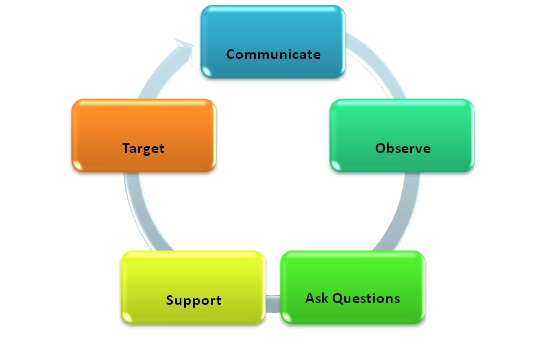 In order to understand the process at a deeper level, each stage of the C.O.A.S.T. Coaching Model will be discussed below:

In the first stage of the process, the client primarily guides the coaching session forward by communicating. The client is asked what he or she would like to discuss while the coach actively listens. The coach makes an effort to listen beyond the words – to understand what is really being said. The coach may occasionally paraphrase what was said back to the client, such as, “It sounds like you are saying . . .” or “What I am hearing is . . .” This allows clients to hear their own thought processes being reflected back to them which can result in new insights and revelations for the client.

During the second stage of the process, the coach observes not only what the client is saying but how the client is expressing thoughts and feelings. Tone of voice, inflections, and word choices can reveal the emotional state of a client and how certain experiences affect the client on a deeper level. A lack of words can also have meaning. Silence can say volumes when discussing sensitive issues. Through observation the coach is guided towards the next stage of the process.

In the third stage, the coach continues to probe deeper by asking many open-ended, powerful questions to clarify certain points such as “What do you mean when you say . . . ?” and “How do you feel when  . . .?” Asking these types of questions channels clients more deeply into their own psyche where they can then explore their thoughts and feelings. Deep listening skills and intuition are used by the coach at this point. Listening from a receptive and caring place provides an environment where the client can feel a sense of trust and safety.

During the fourth stage, the coach continues to mirror back the client’s thoughts and summarizes comments periodically to support the coaching process. The client is acknowledged as well for his or her efforts and wins. Focusing on the client’s strengths and accomplishments supports the client by building confidence and self-esteem.

In the final stage, the coach and client explore the issue of concern. Sometimes, one cycle of the process is all that is necessary to achieve positive results. However, at times, other negative beliefs and mindsets may arise during the coaching session while examining the original issue. An analogy would be the process of peeling an onion; deeper layers of the psyche can often be revealed during a typical coaching session.

Any perspective, belief, or mindset which may be causing the client to feel negative emotions, such as fear, anxiety, and stress, is then targeted. The C.O.A.S.T. Coaching Model process is then repeated by communicating, observing, asking questions, supporting, and targeting newly discovered areas of discussion – the process has a somewhat cyclic nature.

During this final stage, the client often creates a fixed goal or objective in order to support a change in behavior and attitude. The coach works with the client to develop SMART goals – specific, measurable, attainable, relevant and timely. SMART goals are more apt to result in success and sustainability. The client is asked what was learned and how he or she plans to sustain progress and move forward in life.