The name of the model comes from a concept that most car owners are familiar with. If the four wheel alignment is not maintained, a premature or uneven tire wear may occur. In more extreme cases, driver will be required to make constant adjustments to their car’s “pulling” tendencies, to keep it going in the desired direction. For a visual representation, below is a screenshot from computerized four wheel alignment equipment.

This coaching model, just like a car, depends on all four of its elements, or wheels, to be in alignment relative to each other. The Four Wheel Alignment allows the client, within the framework of coaching structure, to travel straight down the line. The line may be along the axis of Being, or of Doing. See the illustration below. 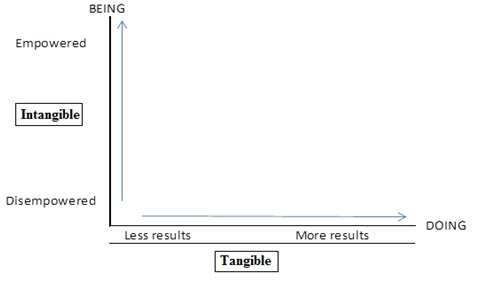 I. The Four Wheels of Coaching

The four wheels of coaching that must be in alignment with each other are:

Each wheel is important and is connected both ways with the other three.

Action Plan – this wheel is responsible for a clear set of simple, step-by-step instructions that are executable for the client. The action items must be set in such a way that they will provide enough information to the fourth wheel.

Evaluation – this wheel is responsible for calculating the distance between current location and the goal by using a predetermined method. The only way this wheel can function accurately, is to have a well-defined goal and quality information produced by the Action Plan wheel.

The foundation of the model, as described above, could be depicted as Figure 1 below. 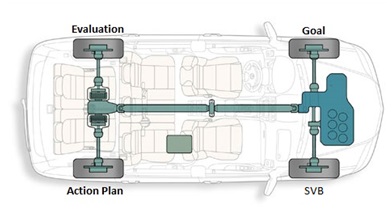 When presented to a client, the model could be summarized in a Figure 2 below.