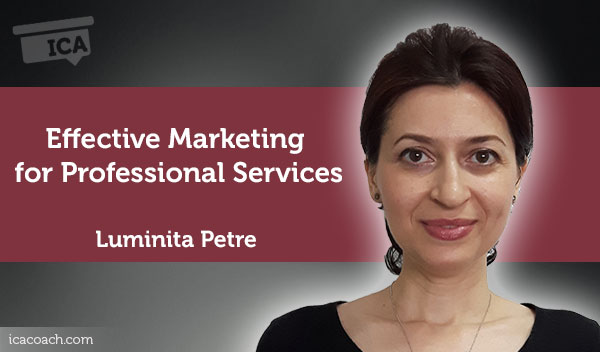 In this coaching process, the client is Alin, a young human resource consultant who wants to work with his friend Dragos, an IT specialist, to develop a work platform that could operate as a database, an innovation in the field.

It is a problem because Alin wants to facilitate his work using this work platform and to develop professionally as much as possible and to make himself visible and known in the market with the most special services that can be appreciated by the potential clients.

The project has been delaying for over a year.

Alin feels like he is kept in place in his professional development plans.

Postponing the making of a joint decision, the impossibility of agreeing the two friends to adopt a certain form of the platform.

I was present in the coaching process, listened actively, summed up and paraphrased what the client said, I asked questions that helped him to realize the importance of doing that project for himself and to create an action plan. I gave feedback on the changes of the energy level related to the experiences that he had during the coaching process about the relevance of doing that project for himself.

The first step was to expose the problem and set a goal for the ongoing session. To the question “What would you like to discuss today?”, the answer was: “I just want to explore, see what happens, I want to have something.” To further clarify the purpose of the session, I continued with another question: “How will you know that you got that?” and the answer was: “I will have an ‘Aha, I did not think about it’, a new perspective to work on.”

The next step was the exposition of reality, the information being gathered by launching the question “How are things now?” to which the answer was: “We meet, we analyze ideas, turn them around and we finish by postponing. We tried every time and we postponing.” The moment was very good to explore the emotionally impact of this problem on the client: “How do you feel after so many attempts?”. “Tired, confused … I don’t know, I want the brilliant idea or just an idea?… We don’t have to choose a brilliant idea, but just an idea to work on. Because we have ideas.” After a brief pause, he continued: “It would be enough to pick an idea and do something. I want tomorrow to do something, however wrong it may be, I would like to take a step.”

Summarizing and paraphrasing (“You told me that you don’t have to choose a genius idea, but just an idea of what you have already and that you have to work on that idea. It would be enough to choose one and do something, even if it could be wrong. For you, it would be enough to take a step.”) and asking “What would it mean for you to take a step?”, I started the stage of exploring the potential for the client, choosing an idea and realizing the project. The client response was physically visible and the energy level was increasing: “Wow, it would be a first step… everything could be moving.” The active listening techniques were meant to emphasize the importance of switching to action: “It would be a first step through which everything could be put into motion.” “Yes. I would like to do something tomorrow.”, continued the client.

The moment was exploited by the question “How much do you want this project on a scale of 1 to 10?” and the answer was: “Very much, 10-11.”, followed by the question: “What do you choose to do tomorrow?”, this latter question generating a response that revealed not only the actions that have been taken previously but also the barriers that the client feels about this goal: “I am going to talk to my partner about this project … but not just to talk, I should be more convinced, more determined, do not let me return to what might go wrong and inspire my partner to move on. But the problem is that I’m not 100% sure that we can go any further anymore… ”

Summarizing (“I understand that you have been before in the many situations like this: you met, you discussed, you analyzed ideas, and ended up postponing. At the same time, you told me that you should be more convinced to go more further, not to return to what could go wrong.”), I created the link to the question of unlocking the potential: “What would this project means to you?” The client’s response was physically accompanied by very positive status changes: “Wow, it would be… the joy of growing something new, totally new.” Continuing exploration of the potential I asked: “What opportunities are there related to this project?” and the answer was: “It would be the common denominator for everything that is important to me, integrating knowledge, projects, people, offering me the freedom to work anyway and in any environment … ”

I emphasized the importance of the project for the client and went further in the exploration of the options, with the intention of finally getting the commitment: “Many chances would mean this project and huge potential has this project, I see.” Confirmation was received from the client side which allowed me to move on: “What are you willing to do for that?”. After a moment of thinking, the client replied: “I think I could go tomorrow and say ‘Let’s do it!

I exploited the moment by summarizing and reflecting, into a feedback (“Can I tell you what I’ve heard and what I’ve noticed?”). I emphasized the fact that the client declared himself willing to assume the choosing of an idea and the overall responsibility for the project and I told to the client what I noticed about the physical statements that were accompanied their verbal expression (by visible changes: opening by posture change, stronger voice, increasing energy levels according as the idea of taking the responsibility for the risks of that choice was strengthened).

In the end, my feedback was: “That makes me think that you really want this project and you are willing to take the responsibility for doing it.” and it was followed by the confirmation from my client.

The last stage of this session was the work on designing actions: “What do you propose to do tomorrow?”. The answer came in the same note: “I will have this discussion with my partner and we will choose one of the most voted ideas. If he has any doubts, I will choose an idea. If the things will do not work well, I will pay, but there’s nothing that could be wrong with it!”

The client has got a new perspective on the situation and has taken the decision to move forward with the risk of taking full financial responsibility for the project, because he has concluded that it is very important for himself.

The coaching process was effective because by using various techniques and skills, the client has increased his awareness about this project and stated his commitment in designing actions.

At the end of the session, I would check with the client, to what extent does the outcome of the session corresponds to what he initially proposed to obtain and how he feels about it, even if this aspect was observed both verbally and physically during the session.

Discussing of opportunities that can meet the client’s needs can be very beneficial for taking action;

Providing feedback about the emotional state (sensed by physical signals) of the client, can be very motivating for the him;

If you work in the rhythm of the client, giving him space for thinking and expression, but at the same time, feeling the growth of energy and potentiating it, you can get an authentic commitment.