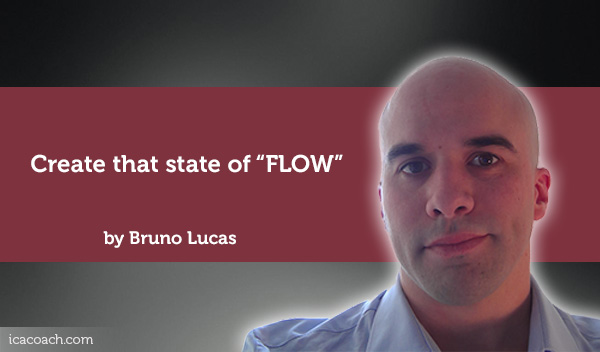 Tyler is a young man that is already familiar with the basic concepts of Coaching. He is working and studying Chinese and Japanese, apart from having other projects. After explaining more about coaching and setting the foundation for our session, I ask him what I can do for him. He explaining that sometimes, when performing his tasks, he enters in a state of “flow”, which is good and productive. He visualizes it as a zone where there is some kind of balance. If his energy goes down, he stops being productive, but when the energy goes too high, he feels anxiety.

I ask him what he expects from our coaching sessions. He answers:

On the first stage of our process, I mainly used active listening, power questions and acknowledging. Later, I also included visualization.

After setting the foundation for our coaching process, we defined his desired outcome. Since he is one of my best friends, trust was already there, which made the process very smooth from the beginning. Through different question (e.g.: Which factors or situations make him get to that state of “flow”, and which factor don´t help him?) I helped him identify already existing elements that he feels he could manage to move towards the desired outcome. I also used exercises (e.g.: Invite him to make a list of talents and strengths, exercise that he found as simple as helpful).

At some point of the process, the client realized that many times he finds himself fluctuating between putting energy on moving towards his goals, and feeling that everything is futile hence it also makes sense to try to find happiness now and enjoy the ride. I follow my intuition and invite him to think about the idea of gratefulness as a source of happiness now. I suggest the exercise of making a list of things for which he is grateful now in his life. He does it and he finds it very helpful, revealing and inspiring. At the same time, we keep working on definite steps towards his goals (research, find information about how, when, where get ready for his goals).

Later in our coaching process, he realized that he wants to pursue a life related to studying as his main activity. He doesn´t want to work full time on something that is not doing that. Through observation and feedback, we discover that his was not feeling very excited about the possibilities for that future, and he realizes that he was putting the power outside (e.g.: institutions, universities, scholarships,…), and after becoming aware of that, we started working on bringing his focus back to what is in his hand. He found that very energizing, empowering and effective.

Later in our process, the client was able to discover how to align the activies he was performing towards his goals with a higher life purpose. That, apart from being empowering, helped him to prioritize and focus on what is more important for him among all his activities. We used a visualization exercise that he found fun and inspiring: In 3 years in the future, you are reading a newspaper and you find there is an article about you and your accomplishments. What things would you like to read?

The client also found new resources as a consequence of our exploration, for example, integrating meditation as a daily practice, to help him avoid getting distracted. Also, when running into the challenge of feeling bad energy from some coworkers, he was able to successfully use the tool of shifting perspective, to remind himself of reasons why those people had bad attitude, difficulties they were going through, etc.

The results of this process were positive. Through these sessions, the client could realize that his priority at that moment was to focus on studying Chinese, and he ended up studying the Chinese major in the university. Apart from reaching and exceeding his main original goals, the coaching process allowed the client to expand his vision of his talents, tools, right actions and right direction.

I would allow myself to share more resources with the client, maybe being bolder in that aspect. But still, I believe that the most important thing is to be present with the client and follow my intuition when making the decision of sharing a resource, and think I did that satisfactorily.

One thing I find very interesting about this coaching process in particular is that we started talking about certain specific issues, but as the process went on, new findings led the client to new discoveries and even new directions. That shows me that a coaching process is organic and alive.

It´s ok to follow our intuition as coaches, and share ideas or resources that we feel can be helpful or inspiring for the client, as long as we do it with respect and permission. Coaching is a partnership, so it is good when there is a healthy exchange between coach and client.

All the areas of a person´s life are connected, so it doesn´t matter in which aspect we start working on, that has a tremendous impact in the rest of the levels of his life.