I believe in intuitions and inspirations… I sometimes feel that I am right. I do not know that I am. [A. Einstein]

How many times you had the perception of knowing exactly what you should do or feeling what was going to happen if you would have done that thing?

That’s what is called “having an intuition”.

The Oxford Dictionary defines intuition as:

Aristotele and Plato believed that knowledge begins with intuition of truths that cannot be demonstrated:

SOCRATES: I will explain. If a man knew the way to Larisa, or anywhere else, and went to the place and led others thither, would he not be a right and good guide?
MENO: Certainly.
SOCRATES: And a person who had a right opinion about the way, but had never been and did not know, might be a good guide also, might he not?
MENO: Certainly.
SOCRATES: And while he has true opinion about that which the other knows, he will be just as good a guide if he thinks the truth, as he who knows the truth?
MENO: Exactly.
SOCRATES: Then true opinion is as good a guide to correct action as knowledge; and that was the point which we omitted in our speculation about the nature of virtue, when we said that knowledge only is the guide of right action; whereas there is also right opinion. [from “Meno” by Plato]

Intuition is listed in the ICF Core Competences as a tool to be used by the coach to co-create the relationship with the client[1]: the coaching presence is demonstrated if the coach “accesses his own intuition and trusts his inner knowing, «goes with the gut»”. 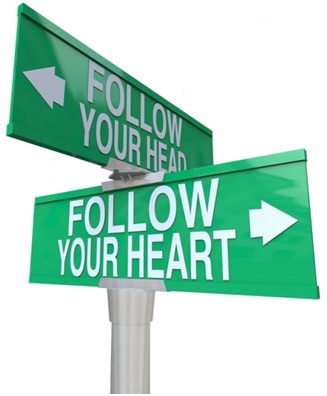 How does this relate to coaching?

During a coaching session a powerful question to ask is “What is your heart telling you?”.

It has been demonstrated by a recent research of the Institute of HeartMath that the heart picks up intuitive information a second or more quicker than the brain. Therefore, the heart can be considered as the source of our intuitions, while the right hemisphere of the brain, the creative mind, processes the information and pass them to the left hemisphere, the action mind, that calculates and works on logic.

Why the source of intuition is in the heart?

Because this is where your values are: values create inspiration, inspiration creates intuition. The intuition can be considered as the outcome of a process that finds its origin in our core values.

Then the brain processes the intuition and compares it to past experiences, knowledge, opinions,… This comparison exercise, that we implicitly do in our mind, becomes explicit when we start looking for confirmation outside us. This confrontation can invalidate our own intuition.

Our intuition is a gift and it is unique as each one of us is unique. No one else can have the same intuition and therefore intuition cannot be validated by anyone else, except us.

That’s why we need to trust ourselves and our own intuition and transform it into action.

If you have created a safe (TRUSTFUL) and supportive (HEALTHFUL) environment around you, you are aware of who you are and what you can and are able to do. It is useless to go back to your mind to decide about the first action to take.

The process goes from the mind (AWARENESS) through the heart (INSPIRATION) to your body (MOVE). Once you have done the first move, you may need to go back to your mind to create an action plan and schedule your next moves carefully and wisely.

You will also need to find resources (ENERGY) to make your action mood sustainable and achieve your aim. Listen to the intuition: a case study

Scarlet is a newly promoted professional. She is considered a top performer, that’s why her boss decides to assign her a strategic project. She loves been challenged and feels excited when appointed as the project leader. While preparing the project feasibility plan, she immediately realizes that the reality does not match her expectations: the deadline is shorter than expected, not all resources are available and the colleague, who was supposed to support her, did not appreciate her appointment and is not willing to cooperate with her. She starts allowing her anxiety to overtake her enthusiasm, and even her self-confidence. She is not enjoying herself anymore, she looks nervous and tired. The project is not progressing and her frustration increases. Her boss noticed the change in Scarlet’s attitude and calls her in a meeting[3]:

THE BOSS:       “What I am hearing is that your mind is groping in the dark… But what is your heart telling you?”

SCARLET:        “That you behave honestly, tell me the whole truth… and why you assigned that project to me!”

SCARLET:        “Well… maybe, I will not be fearing any other bad surprises… maybe, I’ll be motivated again.”

SCARLET:        “Yes, no problem. What does motivate me… Probably, knowing that I can trust you and you trust me. Honesty and trust are my core values!”

THE BOSS:       “These are great values to have Scarlet and I want to acknowledge you for being so open and share them with me. Could we say that you know exactly what you need to succeed?”

THE BOSS:       “That’s great Scarlet. Now I’m going to tell you everything, but before, let me tell you that I am really sorry for not having done that from the beginning. I chose you because I felt you were the right person for that project… and I do trust my own intuition, so do you. Trust your gut feeling, trust your intuition!”

This story has a happy end. The boss behaves as a coach[4]. He uses his own intuition to let Scarlet access her own intuition. By doing so, he sets the foundation for a trustful relationship. There is no judgment, just genuine concern for Scarlet’s welfare and future. He demonstrates personal integrity, honesty and sincerity[5].

Intuition is powerful, trust is powerful. Both intuition and trust relies on our core values.

How can we align also our thoughts and actions to our values? Alignment is essential to achieve our desired aim. Without alignment there is no harmony[6]. Just chaos and waste of energy.

Trust your intuition and transform it into action!

To believe in something, and not to live it, is dishonest. [M. Gandhi]