You are here: Home » RESOURCES » Coaching 101 Minute » Is Coaching an Art or a Science? 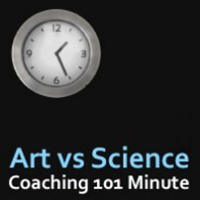 Is Coaching a Science or an Art?

The question that was asked this week was is coaching a science or an art?  This came up as the class was discussing the module “What is Coaching” This module is often one of the first that new students start with, and I say often because at ICA you can actually take the modules in any order depending on your interest and schedule. But “What is Coaching?” is often taken at the beginning and yet it is really one of those big philosophical questions and one that coaches are still discussing at the end of their course.

Anyway back to the focus question for this week. Is coaching an art or a science ?

Initially this conversation ran down the path of looking at the conventional defining features of both science and art and then comparing these concepts to the coaching process.

So for example the ideas science included

And the ideas around art included

It is very easy when looking at these lists to say that coaching is more of an art than a science and I wont go into the detail of that discussion. Instead let’s look at the questions itself. There are 2 problems I see with this question

Firstly the differences in science and art are not so black and white. It is simply not true that science is not beautiful for example and it is also not true that artists don’t sometimes begin with a provable hypothesis. Like most binaries, dividing these 2 practices into distinct camps doesn’t serve either well. Leonardo DeVinci knew it. He was producing work that belongs in both camps years before our culture decided to separate them.

So that’s the first issue, it is actually not true to say science and art are polar opposites

But the second problem is with the question itself. I see this question a lot, “is coaching a science or an art?” In fact what I think people are asking is – Is there a proven formula I can follow that will give me the same result every time? And can I just rinse and repeat in a detached manner? Or is coaching something that relies on intuition and sensory perception.

And the answer is a bit of both.

Yes there are processes and guidelines to follow that have been tried and tested and we know work better than some others. Having your own coaching model for example is something that we have seen over our twelve year history of teaching coaching that actually works really well. And many coaches do benefit from a structure. An accountability framework and a coaching process. Just coaching in that manner and not ever providing a structure or a framework for your clients to move forward is really just to be involved in an interesting philosophical conversations and clients what more than that they want results and they often want measurable results

But will it work every time and in every situation – no.

Coaching does rely on intuition and sensory perception. I guess the word we would use to describe this state of being is “mindfulness” As a coach you have to be mindful of so many things in the coaching moment. Mindful of your clients environment, of their state of being, mindful of the chatter in your own head. In fact these things are so important that we actively teach you to develop your skills in this area.

We call it coaching from the inside out. We teach our students to first practice their new knowledge and skill on themselves – whether that’s active listening, or asking powerful questions or using one of the power tools like commitment versus trying –  we encourage our coaches to first use the skill or tool on themselves and then try it out with clients. Its like they say, you need to walk the walk, not just talk the talk.

To finish up this recap I want to share a quote that was shared on the call. It is from a current student, Hemanth Achaya, and he posted this great coach inside our members forum:

Vision without action is just a dream.  Action without vision just passes the time.  Vision with action can change the world.
Joel Barker

The reason I think it’s such a great quote is that it speaks to both the paradigms of science and art and shows how by connecting the two you really can have a powerful impact.

So that’s the recap – we then opened up the lines to general Q&A abut our coach training programs. Had some great questions: