Family businesses are usually started by a very dynamic promoter who builds the company from scratch. Typically the promoter succeeds and comes up the hard way. They have a hands-on approach to the business. In some instances, it is the 2nd generation who really builds the company that they inherit from the father. Famous examples of successful 2nd generation entrepreneurs are Mr.Azim Premji , Mukesh Ambani, Mr.Lakshmi Mittal, Jack Ma, etc.

Only a little more than 30% of family businesses survive into the second generation, even though close to 70% would like to keep their business in the family.

By the third generation, only 12% of family businesses in the US are typically still viable. Globally, this number is 15% according to a U.S. Trust, Bank of America Private Wealth Management study.

By the fourth generation and beyond, only 3% of family businesses continue to exist.

Survival rate of Family businesses after each generation 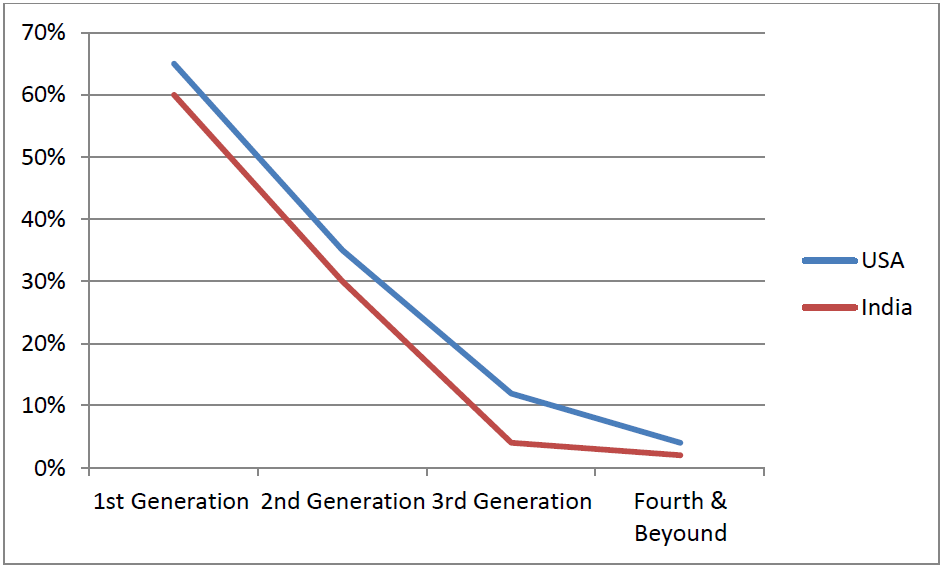 The reasons for this alarming failure rate are mainly due to the following reasons:

When one looks at the core reason for most failures, one characteristic that stands out is emotional inability to listen to reason and/or take action. These entrepreneurs (promoter or the 2nd generation or subsequent generations) have too many mental blocks that prevent them from succeeding and taking corrective actions.

Entrepreneurs, who often lead family businesses, are noted for being rather volatile nature and can prove difficult to work with. Changes in a family firm often shakeup previously established patterns of behavior, causing emotions to rise to the surface such as power, prestige, role definitions, and self-esteem, etc.

If management of emotions is the most fundamental issue that needs resolution, then a consultant, lawyer/attorney, or even a mentor or a counselor, will not be best suited to serve this purpose.

It is my firm belief that a Business Coach is best suited to handle these complex business issues that involves so much emotion in the family business. This is the purpose of this article.

Mr. Ajay Kumar is a 2nd generation entrepreneur of a $200 Million dollar business. The business is mainly into consumer products, chemicals, venture capital and real estate. He is helping his father Mr.Raj Kumar in running his business since 20 years. His role had been initially in administration and keeping an eye on expenses. Later, he starts running a smaller business unit. While his role is slowly expanding in other major businesses; he is yet to take charge of the entire business, especially those which involve other partners/business associates.

Ajay’s father, Mr. Raj Kumar built this company from scratch over 40 years. He is not highly educated but extremely intelligent and very strong personality. Raj has very strong communication skills and has handled very tough situations. The business grew rapidly in 1980’s and 1990’s and upto mid 2000’s. This was largely because of the excellent brands (both Indian and International) that his company acquired or had licensed to. While brand marketing was done by the International companies (brand owners), Mr.Raj Kumar focused on operational efficiencies. He also invested his surpluses in real estates which yielded good dividends.

He runs his companies with an iron hand and has a very hands-on approach. The organization built is run by people who are loyal to him and have a very practical approach towards work. They have been largely good employees without major qualifications and have a good track record. Mr.Raj Kumar leadership style is an authoritarian style but is open to listen to suggestions and scope for improving the business. He works very hard and travels extensively even though he is now in his mid-seventies.

The accounting system of the business is very poor and there is no Chief Financial officer to talk about. The outside audit firm which handles tax audit is left to handle finances and guide regarding the health of the company.

By mid 2000’s, the business grew but the leadership style and organization matrix remained the same. Mr.Raj Kumar continued to remain at the helm and took all decisions and mostly without even consulting his son. Eventually, the law of averages caught up and many investment decisions backfired. Some of the investments were complex arrangements with various partners and most of them got stuck or proved bad.

In light of the above, it was obvious to all that the son, Mr.Ajay Kumar takes over the business and sorts the issues out. However, as a result of 20 years of constantly working in the side-lines and under the father’s shadow, Mr.Ajay Kumar is hesitant to take over the entire business but was only keen on focusing on businesses that he understands and leaving all the troubled investments to his father.

The consultant soon realizes that while there are business issues to be resolved, there is indeed a serious succession planning problem. The dynamics between the father and son is complex and layered. It was also becoming clear that consulting is not the solution. There are a lot of emotions that seem to be playing under the surface. The risk appetite between the two is enormously different. He is wondering if the father-son duo needs to be coached by a true professional Executive coach.