Nonviolent Communication® was developed in the sixties of the twentieth century by Dr. Marshall Rosenberg – a student of Carl Rogers. Rosenberg, born in 1934 in the USA and of Jewish religion, grew up in an inner-city Detroit neighborhood where he was confronted with various forms of violence, including race riots with deaths. This triggered his desire to explore what exactly happens when people behave violently, and conversely, what allows some people to stay compassionate and human under even the most trying circumstances (Rosenberg 2000, pp. xi-3). He chose to study clinical psychology and received his Ph.D. in

Psychology from the University of Wisconsin in 1961.

While studying the factors that affect our ability to stay compassionate, I was struck by the crucial role of language and our use of words’ (Rosenberg 2000, p. 2).

In the wake of these findings he developed an approach to communicating that enables people to connect with themselves and with others in a way that allows their natural compassion to flourish. He called his approach Nonviolent Communication®.

Nonviolent Communication® is based on the vision of a world in which everybody’s needs are taken into consideration and people give and take with joy. The primary goal of NVC® is to help people connect with themselves and others.

Nonviolent Communication® (shortened NVC®) is based on the assumption that…

For many people the NVC® communication model is easy to understand but difficult to put into action. It requires the following three core skills:

In order to facilitate these skills, the NVC® model suggests the following steps: 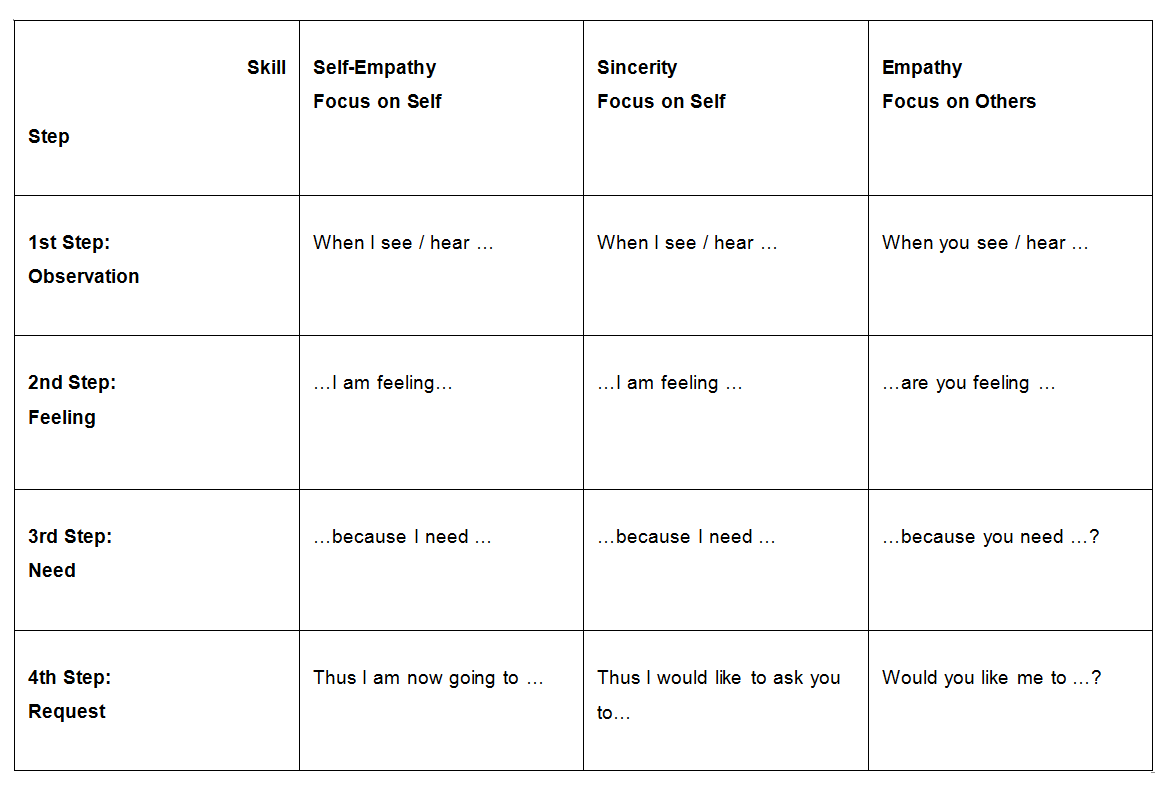 Needs are universal and enable people to connect with each other. They therefore play a central role in the NVC® model. Each and every person on earth – no matter what age, gender or cultural origin – at least at times wants to be heard, accepted, trusted, respected, to name just a few. Feelings act as a signaler, because they point us to those needs which are currently being met or unmet.

Often the quality of coaching is equated with the qualification of the coach. In addition all kinds of standards for the coaching process have been established by practitioners. But up to the present there are no generally accepted quality standards. Dr. Karin von Schumann (von Schumann 2008) analyzed 13 empirical studies and inquiries on quality assurance in coaching. She suggests a trisection of the quality concept: the quality of the structure, the process and the result.

With regard to the structure-quality (the frame conditions) it turned out that the relationship between coach and client is of particular importance for the success of coaching. According to von Schumann’s analysis trust, sympathy, openness and mutual appreciation have a considerable share in the success of coaching (von Schumann 2008, p. 20). Von Schumann states that, in addition, it is important that the coach communicates his coaching concept transparently and that he involves the client in the process. Other success factors are the coach’s listening skills and personal qualities such as integrity, confidentiality and credibility.

Pertaining to the process-quality von Schumann explicates that stating concrete and binding goals and controlling their achievement has a verifiable impact on the success of coaching. Another active factor is the client’s motivation to change.

Relating to the result-quality von Schumann highlights the importance of development oriented appreciative feedback and a detailed closing evaluation with a time lag to the coaching process to check the sustainability of coaching effects.