This research paper intends to illustrate the impact of coaching on full-time working mothers in a multicultural context. As a full-time working mother of a little boy, I have experienced some of the challenges myself and I am highly convinced, that coaching for this particular niche can have a massive impact and brings numerous benefits. To understand this particular niche and its needs for coaching better, I have conducted short qualitative interviews with eight women that match the characteristics of the niche. This paper intends to highlight the most mentioned topics that the women of this niche feel that coaching is needed. I am fully aware that the answers and inputs from these eight women cannot be used to entirely describe and generalize a whole niche, however, I see it as an interesting starting point for exploring and learning more about this particular group of clients.

For this research paper, I have used the following working definitions to provide a common understanding:

Full-time Working Mothers = Women with one or more children who are employed for equal or more than 30 hours per week.

Multicultural Context = This can be either:

In both above-mentioned situations, women are confronted by an environment that they are talking and dealing with people with a vast variety of cultural backgrounds.

Areas with the need of coaching

As the interview results have shown, working mothers who are immersed in a multicultural context have very specific needs when it comes to coaching. In the course of the interviews, I noticed that they face a particular set of challenges, that I would like to present to you hereafter.

Of course, there are other challenges mentioned during the interviews. Nevertheless, these have been mentioned the most by multiple women. Some additional topics that were mentioned could be applied to any other coaching client as well, therefore I will not focus on them.

Coaching for the feeling of being overwhelmed

Women from this niche are required to perform constantly on a high level in a very different set of roles. For example, whereas with the children, the mother could have a leading, caring, and nurturing role, her job might require her to be very analytical, detail-oriented, and technically on top of the game. In today’s time that home office has become more and more common, they are even swapping their roles more often than before, when there is a strict physical difference of working place and home. The topics of the conversation that are held in these two mentioned roles are most likely very different from each other.

Adding to the two mentioned roles above, a woman also has the role of being a family member, such as daughter, sister, aunt and/or spouse, the role of a friend, the role of a community worker, etc. – this list could be very long. Plus, as also mentioned in the example above, there is usually no clear boundary of when a role starts or ends. For example, when a child is sick and the woman gets a call at her work, she will be “pulled” out from her working role and needs to respond from her mother’s role. Wanting to fulfill all expectations and requirements for each one of these roles could lead to the feeling of being overwhelmed.

Coaching can impact the client to first all gain an awareness of which roles are being played. The awareness piece can then be extended to the clients’ values and belief systems so that the woman can gain clarity around what is important to her and whatnot. This is base for her being able to extend the awareness piece to the topic of priorities. Fulfilling every role on a perfect level including having enough time for oneself might not be reachable for the client, however, with clear priorities the feelings of being overwhelmed can be reduced significantly.

Coaching for feeling guilt towards others or oneself

The majority of the interviewed women declared that at one point in their life as full-time working mothers in a multicultural context, they have had to deal with feelings of guilt. Guilt towards their children of not spending enough quality time with them but also feelings of guilt towards their employee, boss, or colleagues when they, for example, have to take a sick day when a child is not feeling well. These two feelings of guilt were mentioned most, however, guilty feelings could also be directed to a neglected spouse or a friend or by realizing that one has been neglecting oneself.

Coaching for having more energy

Energy spending, as well as energy-draining activities, could be different for every client. Nevertheless, the women from this niche have mentioned that the feeling of high responsibility in the different roles could be energy draining. Also, the lack of time that they have for themselves is not adding up to the energy level. Being exhausted and tired regularly is something that could be found quite often in this niche. It was also mentioned that having a lack of energy leads to less motivation and more laziness and in the end, turns into a vicious cycle.

The impact of coaching on how to have more energy is twofold. For one thing, a coaching session itself could be a source of energy in which the client feels able to fill up the energy level. But probably more important, a coaching session can provide the ground to explore what these women see as draining and what they see as energy spending activities. By getting awareness around what serves them well in terms of energy provides the base for designing activities that fill up energy levels. Also, while working on an action plan, the women can find a solution on how to have more energy-filling activities incorporated into their everyday lives which they can benefit from for the long term.

Coaching for taking care of oneself

As for the reasons mentioned above, many of the women from this niche mentioned that there is barely time left to take care of themselves. The whole day they are busy managing career and family and in the evening, they mentioned being too “exhausted” to do anything else than falling into bed and sleep.

Like in the chapter before, coaching for this topic has two aspects from which clients can benefit. First, coaching as a practice of self-development could be one of the practices of taking care of oneself. Second, in a coaching session,n the client has the chance to get clarity around the notion of what taking care of oneself means to them. For some women, this means going out and exercise, for others this could mean to lay in bed and read a book. Important here is, that the client identifies the need for herself, and nobody else. Then, once there is clarity, the client can work on and create spaces during the day that allow them to take care of themselves, whether this is by setting a specific time aside or integrate the activity into their day.

Coaching for how to fit into the multicultural context

When being asked about the challenge of being in a multicultural context, two topics were mentioned quite frequently by the interviewed women.

In the first case, coaching could have a great positive impact in terms of the client going through cultural adaption. As with any other change, moving to and living in another country means going through the whole cycle of change. In most cases, sometimes more visible than others, clients suffer from a culture shock (Now Health International, 2021). 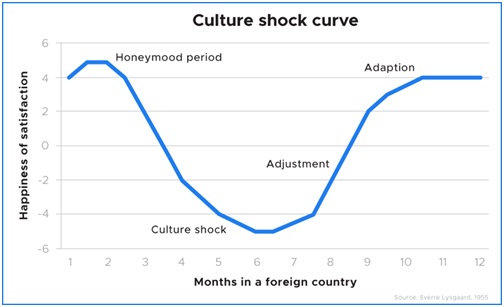 According to Sverre (1955), the person undergoes four stages, from the honeymoon period, to get a culture shock, to adjustment and adaption when entering a new culture.

Coaching is an excellent practice to accompany this process to shorten the culture shock/adjustment time and/or make it easier for the woman. The woman can work on seeing potential hurdles and challenges and work on strategies to overcome them before they hit with the full impact. Also, they can explore and reflect on themselves and their surroundings and find commonalities which is a crucial step to adapt to a new environment.

As mentioned as a second point, cultural differences can also occur when the woman is not living in another country but dealing with other people with different cultural backgrounds. Expectations, values, belief systems might differ which could lead on both ends to misunderstandings and has conflict potential.

Coaching could support the women to understand and strengthen their values and beliefs, in case needed. Also, coaching allows a space to try out to empathize with the unknown to apply the learnings in real life.