Conflict coaching or conflict management coaching has formally existed for over twenty years.  It is an individualized process for helping people to effectively engage in conflict. (Saha, 2012 P.115)  The first conflict coaching programs were created in the 1990s at two universities.  It originated out of the fields of conflict resolution and executive coaching.

Conflict is defined as a controversy, quarrel, or discord of action, feeling, or effect; antagonism or opposition, as of interests or principles. (Dictionary.com) It typically has a negative connotation, however, there are benefits to conflict.  Conflict can provide the parties involved the opportunity to “learn from one another, to collaborate, to improve their communication skills and relationships, to reconcile and accept differences, to gain new perspectives, and to develop creative and innovative solutions for handling issues in dispute and the contention that surrounds them” (Noble, 2012 P. 2)

Working with a conflict coach may not always help individuals resolve conflict, because their other parties involved and this is an individual process.  However, conflict coaching may aid the individual in finding new perspectives and ways to engage in conflict.

Conflict coaching developed within the conflict resolution community to address the need for a process to problem-solve for one.   This model was created because “there were limited processes that offer people one-on-one assistance to gain the knowledge, skills, and ability to engage in conflict in constructive and productive ways, to pre-empt unnecessary escalation, to regulate their emotions and to manage the impact of conflict on those who are directly and indirectly involved.” (Noble, 2012 P.2-3)

Conflict coaching may have developed and grown in the educational setting, it has developed into a conflict resolution tool in the workplace/organizational setting.  “Conflict coaching has been identified as a successful system in dealing with organizational disputes… companies are taking up opportunities to teach coaching skills in the workplace.” (Saha, 2012 P.114) The two models discussed in this paper, The Comprehensive Conflict Coaching Model and the CINERGY Model, are mainly used in a workplace setting.

The Comprehensive Conflict Coaching Model (CCC) was created by Tricia Jones and Ross Brinkert.  Both are experienced conflict coaches, however, their view of conflict coaching comes from their respective work as conflict communication researchers, teachers, training development professionals, mediators, and consultants. (Jones and Brinkert, 2008 P.xv)

The CCC is based on the idea that “coaching aims to foster client empowerment with the coach combining expert and facilitative approaches”. (Jones and Brinkert, 2008 P.14)  Coaches should only act as an expert when they are qualified to do so.  Coaches should actively provide information and recourses for the client to consider.  “Coaching is about helping someone reflect on conflict and possible course of change; it isn’t about forcing the reflection or change.” (Jones and Brinkert, 2008 P.14)

The CCC was created with four stages and a parallel process.  Before starting the CCC there is a preparation stage.  Preparing is for the benefit of both the client and the coach.  It should be determined if conflict coaching is appropriate.  This involves a conversation with the client, to determine that the client understands the coaching process, wishes to proceed, is coachable, and to ensure the coach is the right fit.

The next step is to Explore the Conflict through three different perspectives or lenses, identity, emotion, and power.  These three perspectives are connected and viewed as the source of most conflicts. Every person has multiple identities such as personal, professional, and situational.  Conflict is often created because “they believe someone or something is preventing them from being who they are or who they want to be.” (Jones and Brinkert, 2008 P.37) Looking at the conflict from the emotional perspective can help a client figure out what motivates them and what they value.  This perspective can also help the client discover emotional triggers that can contribute or cause conflict.  It is important to understand that emotion can manifest in different ways. The power perspective is based on the idea that power is unavoidable and intertwined with conflict.  Individuals demonstrate power when they cooperate, compete with others, or are left alone.  (Jones and Brinkert, 2008 P.116)

After analyzing the conflict or narrative through these three lenses, the next stage is Crafting the Best Story.  The best story is one of success that meets the identity, emotions, and power goals of the client. (Jones and Brinkert, 2008 P.38) The best story is only for the client and it does not have to be accurate or shared by others.  At this stage, the coach may take the lead because they have the relevant skills and knowledge.  This is where the coach may act as an expert.

The CINERGY Method (CM) was created by Cinnie Nobel.  Cinnie is a lawyer-mediator and a coach certified by the International Coaching Federation.  The CM is based on the author’s name and synergy, which is defined as “the cooperation of two or more things to produce a combined effect greater than the sum of their separate parts” (Noble, 2012 P.3) Synergy happens “between a specifically trained coach and a client who wishes to optimize their potential for effectively engaging in conflict.”  There is a synergy between coaching and mediation (Noble, 2012 P. 3-4)

The author defines conflict coaching as a “one-on-one process in which a trained coach helps people gain increased competence and confidence to manage and engage in interpersonal conflicts and disputes.” (Noble, 2012 P.3)  The CM was created to help people who wish to increase their conflict competence.  It was also created to help people who wish to “gain skills and confidence to independently manage or resolve a specific dispute or to prepare for an anticipated one.” (Noble, 2012 P.8)

The CM pulls from three different pillars, coaching, alternative dispute resolution (ADR), and neuroscience.  Coaching operates with the idea the client has the “ability to access the information, knowledge, resources, and wisdom to make changes, to choose different actions and to shift habits that are not working for them.” (Noble, 2012 P.14)  Coaches use a model to guide the process to help clients reach their goals “coaches do not provide clients with strategies advice or opinion.” (Noble, 2012 P.15)

ADR involves several different conflict resolution methods.  CM uses ADR and specifically mediation as the second pillar.  Mediation involves an impartial person, the mediator, who helps the parties reach a mutually acceptable resolution of a dispute.  The mediator does not decide the outcome of the dispute.  CM pulls from several different types of mediation.  Neuroscience is the third pillar of the CM.  Before walking through the CM stages there is an inquiry stage.  The client and coach explore if coaching is correct for the situation and establish the coaching agreement.

Clarify the Goal is the first stage of CM.  Being clear on the client’s goal can help keep the client and coach on track.  The client may need to vent about the conflict before the goal is established.  It might help to have the client think about their goal before the session.  The client’s goal may change as things go through this process.  The next stage is to Inquire About the Situation to obtain the client’s version of the conflict.  The details about the facts are not as important as being clear on what created the client’s emotional responses.  The coach should hold space for the client to vent.  The coach must stay impartial to the other parties in the conflict and should help the client avoid dehumanizing the other parties.  The parties should have names real or fictional.  Terms such as idiot should be avoided and not used by the coach. 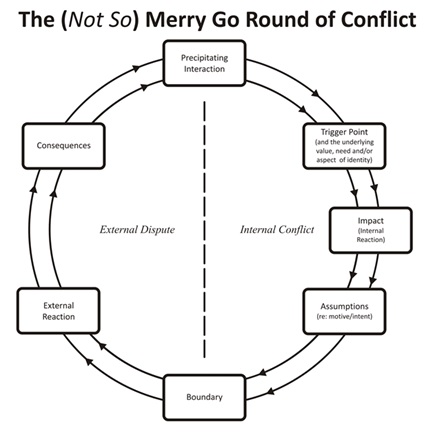 The second stage is about gaining information and the third stage is about analyzing the conflict.  The client should acknowledge any new awareness gained through the analysis.  If there are no new insights this should also be acknowledged.  The coach should check in with the client and see if the initial goal discussed during the Clarify Stage, should be revisited due to the new insights and awareness.

After the goal has been confirmed, the client moves to the fourth stage, Explore Choices. The client now explores the options to reach their goal.  The client then conducts an opportunity and risk analysis of the options.  They should consider several options where possible, and the risk assessment should be considered from the other person’s perspective.

The client has examined their choices, they then move to the next stage, Reconstruct the Situation.  The client will create a plan of action.  If the client was already tried a plan and it didn’t work, they can reconstruct a plan at this stage.  They should walk through the plan and consider potential obstacles.  The coach helps the client test and examine the plan.  The coach may share feedback and observations.

If the client hasn’t already considered or thought about challenges or obstacles, they should be considered in the sixth stage, Ground the Challenges.  Challenges shouldn’t be considered until there is a plan.  After these are considered and planned for the client moves to the final stage, Yes, the Commitment.  This final stage is applied to each coaching session.  The client confirms their next steps, share their takeaways, what they will do between sessions.  The coach acknowledges the client’s efforts and ends on a positive note.

The Comprehensive Conflict Coaching Model and the CINERGY Model have similarities and differences.  One of the major differences between the two models is the role of the coach.  The CCC envisions the coach acting as an expert or consultant in certain stages of the model.  As the CM is based on the International Coaching Federation definition of coaching, the coach does not provide strategies, advice, or opinions.  However, both were created to help an individual develop skills to resolve a conflict in a one on one process.

A lawyer has different roles, they can be an advisor, an advocate, or a negotiator on behalf of their client.  A lawyer can also be an impartial mediator or arbitrator.  My research on conflict coaching helped me learn how the skills I have gained as a lawyer could be used for the benefit of my future coaching clients.  I am very drawn to the CINERGY Model especially since it is based on the coaching principles set up by the International Coaching Federation.  However, I do see the benefits of the Comprehensive Conflict Coaching Model.