Silence is not the absence of something but the presence of everything. John Grossman

Since I began the journey of learning to become a life coach, a whole new way of viewing life has opened up for me. In particular, the revelation of just how many facets of relating in the coaching relationship has been staggering. They are so numerous and just to name a few there are such things as :

There are many more that could be mentioned, but for the purpose of this paper I would like to highlight an aspect of communication that I had never really considered until embarking on this journey. This is the use of silence in a coaching conversation.

Let’s start by looking at the meaning of silence.

The Meaning of Silence

According to Wikipedia, ‘silence’  is :

The lack of audible sound or presence of sounds of very low intensity. By analogy, the word silence can also refer to any absence of communication, including in media other than speech.

In music, music inherently depends on silence in some form or another to distinguish other periods of sound and allow dynamics, melodies and rhythms to have greater impact. For example, most music scores feature rests denoting periods of silence. In addition, silence in music can be seen as a time for contemplation to reflect on the piece.

A common way to remember a tragic incident and to remember the victims or casualties of such an event is a commemorative moment of silence.

And the Merriam-Webster dictionary says this :

As you can see silence is used in different ways and for different effect, as in the silence or rests in music being used for contemplation or reflection. What I hope to bring out in this paper is how silence, the absence of speech, can help the client gain new insights or perspectives as they sit with themselves, looking within, in response to a question or observation from the coach.

What I have found is that this type of silence in the coaching conversation is a very powerful tool in helping the client gain clarity on what is really going on in them. As we so often say as coaches, the answers are within the client, and this is a powerful way to bring those answers out and into the conscious mind of the client, to the surface, where awareness happens, and where change can take place in the client’s life.

Another form of silence is in a spiritual sense, where the absence of noise and outside influences, including speech, can distract from and hinder the nurturing of inner silence and even inner peace.

Joseph Dispenza, in his article The Splendid Spiritual Practice of Silence, says this :

Being silent within is really being absent from the world of busyness, and at the same time present in the moment. What happens when one is silent for a long period? The outer noise goes first, and then the inner noise starts to evaporate. Soon, quiet reigns everywhere it seems. Silence grounds me and gives me serenity and mental clarity.

Deep within us is a great well of health, abundance, knowledge, guidance. When we enter the silence and stay in the silence, we come into direct contact with that sacred well. In that place dwells our True and Higher self. It is that part of us that exists and operates where there is no time – no past, no future – only the present moment. It is the part of us that is connected to all of consciousness. It holds the answers to all our questions, the solutions to all our problems.

This aspect of the use of silence highlights how focus is intensified, revealing how an individual can really get in touch with their deep inner self, allowing a person to have a space where all of the external noise and outside influences fall away and allows the true self and a deeper level of conscious thought to be heard.

The further the use of silence is delved into and utilized as a powerful tool to be practiced in coaching, the greater the ability for the client to get in touch with what is truly going on in their inner world.

Reflection on Silence in Coaching

One skill that requires a lot of work or effort to develop in conversation is silence. In many instances it can be a real challenge not to fill a silence in a coaching session. Many times it’s as if something can be pulling a coach forward to fill a silence. After all, being a coach is about asking powerful questions which could then mean a misconception on the coach’s part that silences mean that I am not really helping my client.

In coaching it is about the client owning and discovering the answers within themselves, therefore it is integral that the coach is prepared to listen to silences as well as words, recognising that the silence may help the client focus. Silence can be a very powerful tool.

The ability to develop and use the skill of silence in coaching can make us far more effective coaches, in that we become more competent at listening, and listening well.

Most of us only engage in listening as a way of waiting for our turn to speak. However, if we are able to resist what we may be thinking about while we are listening, and to instead focus specifically on being silent, and listening well, i.e. actively listening, we would be surprised how much our ability to concentrate will improve.

If we remember that listening is far more powerful than speaking, by contrast we learn nothing by saying something. Because what we say is something we already know. Further to this, how often are we really able to influence another’s beliefs by what we say?

This reinforces the thought that lasting change for a client only comes about through their ability to discover their own answers.

The statement, “Silence gets you out of the way and creates a space others will fill in with themselves” speaks volumes. How true is that when we just allow an extra few seconds for the client to reflect a little more on his thoughts and what has gone on just prior to that in the coaching session, perhaps as a result of a powerful question asked by the coach.

Making Room for a Client

In every day life it is more common to be talked over than listened to, and also to feel pushed back by a tide of words, whereas silence leaves a vacuum for the client to fill. It may be unnerving for a reserved client to sit in silence and not feel compelled to speak and fill that silence, but they may also feel drawn out by it, even if there is a little discomfort.

Another aspect in the support of silence is that by remaining silent at an appropriate time, we avoid trying to steer the client, as this space can allow the client to choose any number of directions to go. Whichever way they choose can open up numerous avenues to explore and can even highlight areas that may not have seemed relevant before. Either way it can help to bring things to the client’s awareness that may need their attention.

Further, as we grow in using our intuition with silence we allow the client to keep following their thoughts. As a coach sitting in that space of listening we can become very conscious that the client is still very much exploring other options in how they are thinking through the question. Instead of the feeling that nothing is actually happening the client is adding to and building on previous thought flow.

A comment made by a fellow student on the ICA forum really spoke to me,

Silence has a powerful and full world in itself. Helene Genillard

How Silence Benefits the Client

In the several meanings of silence mentioned at the beginning of this paper, I would like to highlight the emphasis of silence in regards to music. And this is the silence of reflection, a rest, a moment of contemplation of the piece of music being played.

In coaching, this rest, or silence, provides a time for the client to contemplate and reflect on, perhaps, a question asked by the coach, or an insight the client received during the coaching conversation.

If the coach were to jump in during such a silence, it can derail the client’s thought process and perhaps derail the growth or ‘aha’ moment that could have occurred.

A time of silence for the client can be a powerful time for some revelation, or insight, that may not come any other way. As we know, the answers are already in the client, and sometimes this silence is all that is needed to help them find them. A common misconception that occurs in every relationship with other human beings is that when we communicate or impart information, it is received the same way that the person sharing it experienced it. This is so far from the truth.

It is almost guaranteed that if you were at an information seminar or event that was about communicating about any number of topics and you were to ask a group of individuals what information or insights they gained, whether there was 100 or 1000 people at the event, you would get a whole array of different answers. Some people would not even be able to give an answer straight away. They may say something like, “Give me a day or two to process what I’ve heard and I will get back to you”.

I have used this as an expanded view of what can happen in a coaching session. People have different ways and time frames in which they can receive and process questions, therefore silence after a question is imperative for allowing the variable in every individual client to be able to come back to the coach with a response.

To summarize all that has been brought out in this article, it can be clearly seen that the use of silence in a coaching situation is of the utmost benefit for the client and also equally as important for the coach.

The different areas that I have shown where silence is used intentionally with different emphasis, such as :

reveal how, with a clear purpose, silence has been essential in giving extra meaning and depth to each area that it is applied to. So too we can see how silence can be used to give depth and meaning to a coaching session. It is a space that we should not be fearful of, but one that we must take advantage of.

I trust that just as I have been transformed in how I see silence, and my perspectives have shifted about the practice and use of silence in coaching, more coaches will come to see how powerful this tool is, and will come to embrace and cultivate the power of silence in their coaching sessions. 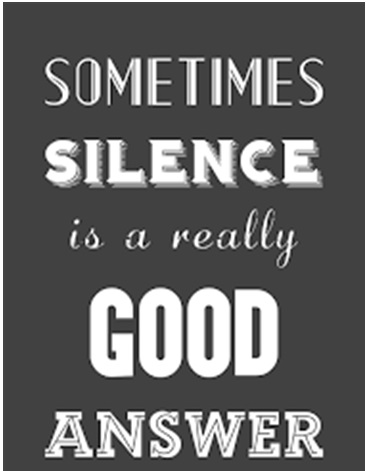