You are here: Home » COACH PORTFOLIOS » Research Papers » Research Paper: AHA Moments – Reasons for Emergence and their Implications in Improving the Efficacy of Coaching

The grounded theory approach was used in this study. The study was not based on any pre-conceived theory or assumptions. It was aimed at finding the implications of AHA moments in the process of coaching, if any. Review of current literature did not show any significant work being carried out on AHA moments.

Data collected was then collated and analyzed. Quantitative data was analyzed using a basic spreadsheet program. Analysis of text was done on responses to answers of qualitative / textual questions to understand and highlight any significant information.

A total of 62 people responded to the survey, of which 20 were clients and 42 were coaches. The study was primarily carried out through ICA students/alumni though others also took part.

The responses to the various questions were as follows: 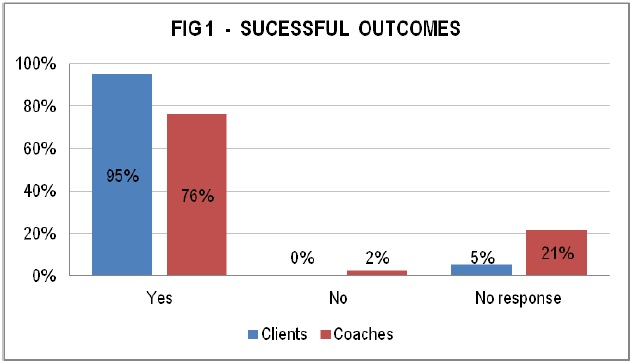 95% of the clients indicated experiencing such a moment whereas only 5% indicated otherwise. Amongst the coaches, 76% indicated that their clients experienced AHA moments, 22% did not respond to the question and 2% reported otherwise. Fig 2

3. On the main reasons for the emergence of AHA movement: Of those who responded, 50% of the clients indicated, gaining a new perspective as the main reason, while 33% indicated change in mindset. The other three reasons (options) constituted 6% each.

Amongst the coaches, 35% reported gaining new perspective as the main reason for a client AHA moment, 32% indicated change in mindset, 26% quoted emergence of clarity and 6% quoted other reasons. Notably, none of the coaches quoted recognition of new tools as the reason. Fig 3

4. Willingness of the coaches to change the way they coach and coach only to that specific reason on becoming aware of the reasons for the emergence of an AHA moment: 5. What will change for the coaches and how the coaches will use the new information or knowledge? 81% indicted that they will coach to their existing natural style and model and use the newly gained knowledge as and when required. 13% indicted that they would use their existing process / model but incorporate the new knowledge consciously in your coaching process every time they coach. Significantly, none of the coaches (0%) said that they will coach consciously and specifically for a particular outcome. 6% did not respond. Fig 5