Expatriation. Such a simple word for such an amazing and surprising experience. Leaving the comfort zone, routine, landmarks behind in order to experience a new life, often far from the loved ones; facing cultural shocks, having some difficulties with the barrier language, trying to adapt to the new environment… All these phases will require time, perseverance, personal awareness and a strong self tolerance.

Living in a new environment and culture in a host country is definitely a challenging experience. Not only new expatriates who start a new mission face different stages of adaptation; those mastering the expatriation will also experience some drastic changes if compare to their last experience.

An overseas assignment is a change which requires the expatriates, their spouses and children to restructure, develop and adapt in response to the requirements of the new environment.

This research paper will concentrate first on understanding the importance of culture, then on the different phases of the expatriates’ adaptation during expatriation, and will end with a chapter on how coaching would help to this process of adaptation.

Part 1: The importance of the culture

Culture is the software of the mind Hofstede

Hofstede described in 1991 the culture as “the collective mental programming distinguishing people in one group from people in other groups”.  In this sense, culture is a system of meanings, values and beliefs, expectations and goals.  Later, Punnet in 1998, will define it as:

The culture in which we are raised deeply affects our behavior and thinking. Going from another culture to another will lead to a process of acculturation. Webster, in 1996 defined the acculturation period as “ the modification of cultural traits induced by contacts between people having different ways of life or in short, cultural change.”

Berry and Kailin, in 1995, explained that four basic orientations to cultural relations are possible in the acculturation process:

If expatriates preserve their own cultures and are not attracted to the local’s cultures, they will probably experience difficulties in adjusting to the new environment in the host country. Same scenario will happen if they retain their own cultures and they do not want to accept a foreign culture, even though they are temporarily part of that culture.

Researchers  developed frameworks for cross-cultural communication. One of the most famous is Hofstede’s cultural dimension theory. Hofstede described the effects of a society’s culture on the values of its members and how these values relate to behavior.

His theory proposed six dimensions along which cultural values could be analyzed and compared between countries.

His work established a major research tradition in cross-cultural psychology and has been used by researchers and consultants in many fields relating to international business and communication. It continues to be a major in cross-cultural fields in order to understand other aspects of culture such as social beliefs.

Knowing their own culture is vital for the expatriates to smoothly accept the process of acculturation.

Besides, in order for this process to be a success, it is important for them to understand the different cultural dimensions of their host countries.

Nevertheless, even though they will successfully analyze and reflect on  their “new” home’s cultural aspects, adapting in this “new” environment will take time and energy.

The second part will describe the different phases of adapting abroad.

The degree of psychological and socio-cultural comfort with various aspects of a host country Black, 1988.

Adapting to a new environment takes time and the pace of transition varies from person to person. The typical pattern of cultural adjustment often consists of distinct phases as Lysgaard developed, in 1955, in his U-Curve model of adjustment such as:

Phase 3. The Recovery and Understanding 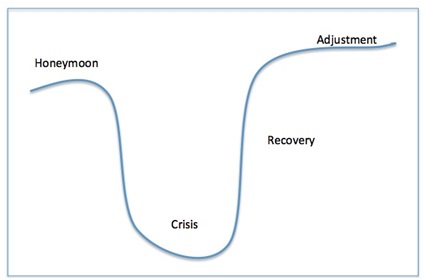 Adjustment as a process over time seems to follow a U-shaped curve: adjustment is felt to be easy and successful to begin with; then follows a ‘crisis’ in which one feels less well adjusted, somewhat lonely and unhappy; finally one begins to feel better adjusted again, becoming more integrated into the foreign community. Lysgaard

Everything is exciting, new, and predominantly positive

This phase is best described by feelings of excitement, optimism and wonder often experienced when you enter into a new environment or culture. While differences are observed, expatriates are more likely to focus on the positive aspects of the new environment.

This phase is also known as Euphoria stage which usually starts during the first week in the host country.

This what is often termed as “culture shock.” Culture shock has been defined in different ways by many social scientists. In general, it is a term used to describe the anxiety and feelings (of surprise, disorientation, confusion, etc.) felt when people have to operate within an entirely different cultural or social environment. It grows out of the difficulties in assimilating to the new culture, causing difficulty in knowing what is appropriate and what is not. Often, this is combined with strong disgust (morally or aesthetically) about certain aspects of the new or different culture. Culture shock does not necessarily occur suddenly, but may gradually begin to affect a person’s moods over time. The length of time a person experiences culture shock depends on how long they stay in the new environment, as well as their level of self-awareness.

Culture shock manifests itself in different forms with different people but some symptoms can be: