Besides my professional activity as Director of Human Resources for a multinational company in Switzerland, I have delivered retirement preparation classes for the last six years in four different organizations. As a certified HR professional on technical matters such as Swiss and European social security, pension contributions, and labor law, in these classes, I mainly covered topics related to financial planning, tax optimization, and social security. The award of a post-graduate certificate on “Total Remuneration” from Michigan State University reinforced my technical knowledge, in particular, with relation to U.S. Pensions (401) and enabled me to compare pension plans at international levels.

The real “ah-ha” moment – as we call them in a coaching context – took place three years ago, during one of the many one-on-one retirement preparation discussions with a future retiree. This employee, with a strong academic background and holding a senior position, became very emotional and confided that he was absolutely scared and had no personal network nor hobbies. He was due to retire six months later, at the legal retirement age in Switzerland. Since he had no financial problems, rather the opposite, having worked for more than 30 years in a company with a very generous pension plan, he belonged, in my view, to a rather privileged group.  As I was researching and looking for retirement coaches it made me understand the void in traditional retirement planning and encouraged me to move the content of my class and individual discussions to another dimension, focusing on the non-financial aspects of retirement planning. My search for the ways to add a self-assessment that examines values and strengths and clarifies goals, hopes, and dreams for the future have brought me to the desire to be certified as a coach.

One of the biggest reasons why people fail at retirement is that they don’t have a plan for the non-financial aspects. Yes, they love the first few weeks and months, often called the honeymoon period, but after that, it doesn’t always turn out as they expected.  In fact, it falls far short.  People lose purpose, become bored, can feel isolated with less social interaction, and they don’t have the extra desire or motivation to work out or travel which they expected they would.

This is a major personal problem because you really can’t tell anyone that retirement isn’t going well since they will think you’re crazy. This is one of the major social stigmas people face in retirement.  Everyone assumes that retirement is the holy grail of life and we are all brainwashed from an early age that if we can just save enough money to never work again, life will be great.

But that is not always the case. People don’t realize the value that work provides for them, even if they don’t love their job or role.  It provides structure, purpose, routine, deadlines, social interaction, and physical activity, even if this is just walking to-and-from the parking lot.

Some retirees, with poor planning, could quickly realize that something is missing, and spiral into depression or anxiety. Retirement coaching helps people see retirement for what it truly is by taking them through a process to help them replace their work identity, allocate their time and resources, stay relevant and connected, as well as mentally and physically active.

The term retirement has multiple meanings: Amongst others, it refers to the termination of and the formal withdrawal from regular employment, a social status, and economic condition, and a lifestyle dominated by an economically nonproductive activity (source: Webster Dictionary).

Retirement is a novel institution. It is mostly linked to social security funds, a concept that was introduced in many countries in the third or fourth decade of the twentieth century. Social Security was perceived as the mainline of defense against the threats of impoverishment. It turned the dream of retirement for workers into a tangible reality. At the beginning of the 20th century, the average life expectancy barely reached the age of 46.3 in Switzerland. The few workers who did make it into their sixties could expect to live an average of a further 1.2 years.

In contrast, nowadays, most workers aged between 45 and 50 would consider themselves as fairly young or, more accurately, “young middle-agers”. Life expectancy in Switzerland in the year 2020 is anticipated to be 81.7 for men and 85.9 for women. Men who retire at 65 can, therefore, look forward to an average 19.9 years of additional life. Women 22.7 years. So people may well spend a quarter of their entire lives, and in some cases even a third, in retirement. An overwhelming majority of both men (60% of them) and women (65%) have voluntarily or involuntarily left full-time employment before they have even reached age 65 or 64 for women (legal age of retirement in Switzerland in 2020).

Level of activity in Switzerland by sex and age (source: Swiss Federal State of Statistics) 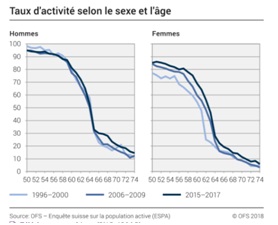 Retirement often means a loss of identity. It is by itself is listed as the 10th most stressful life event in the “Holmes and Rahe Stress Scale”, which lists life’s most 43 stressful events. Retirement is one of the most highly sought-after life phases but it is also one of the least understood, which is why I believe that retirement coaching will continue to grow in prominence and acceptance in the coming years.

Retirement is clearly no longer the destination that it used to be. Now, the likelihood is that retirees have 20, 30, maybe 40 more years ahead, and that’s a long time for anyone to not know what they want to do.

Retirement has a lot of moving pieces. Most people spend their professional lives working nonstop to reach financial independence and then once they reach retirement age they realize that their dreams and goals have changed a lot since they started thinking about retirement. People go into it with the best intentions but find they quickly unravel as a wide range of thoughts and feelings surface that aren’t always fun or easy to talk about, let alone work and discuss through.

Without a holistic retirement preparation, future retirees have a high risk of wasting the first few, and most valuable, years of retirement trying to puzzle out who they are now, or wondering why retirement doesn’t look or feel what they expected, questioning their decision to retire, dwelling on the past, and worrying what they could have done better or differently. They could also feel unappreciated or rejected because they were not invited to be a part of the community dinner or fundraiser… or weren’t asked to join a group of friends for a party.

Unfortunately, after many years in the workforce, it’s common for people – especially workaholics – to have become so engrossed in work that they aren’t able to function without it. Not only are they unable to deal with the lack of work routines, but they also have a hard time functioning without the sense of achievement that comes from being involved at work. According to researchers, more than one-quarter of all new retirees in the U.S. experience mental health issues, such as depression and anxiety, after they stop working (29.1% for Women and 28% for Men). In Switzerland, this proportion is even higher, as the Swiss Medical Review indicated in 2009 that at least 30 to 35% of newly retirees experience depression within two years after being retired.

Why is Retirement Coaching so important?

Retirement coaching is not a one-time assessment. Retirement coaching invites future retirees to keep an open mind and see retirement as a fresh track adventure. For some, especially those addicted to “busyness”, it’s the first time in their lives that they need to be able to deal with white space. I have noticed that about 90 % of participants in the retirement preparation classes I have been delivering focus on financial planning and simply close their eyes to the life change that retirement implies.

Retirement coaching offers the opportunity to build an action plan and take steps to ensure that when the bell rings to announce the retirement, retirees are ready for what’s in front of them. Retirement can be a time for life’s best moments, provided that future retirees take the time to plan what they are going to do with the rest of their life. Retirement coaching invites future retirees to take ownership and responsibility for their planning. No one else is going to do it for them. Also, how future retirees define themselves during retirement will likely be much different than how they have defined themselves during their work life. Surprisingly, even highly intelligent and abundantly skilled people have a difficult time making the transition to retirement and the personal freedom that they gain with it. Retirement responsibilities are fundamentally different from those experienced when working for a Company. Thus, individuals who have had someone else plan a major portion of their waking hours are at a loss when there is no one else there to do it for them.

Retirement coaching helps future retirees identify those things that matter most to them, personal interests, creative pursuits, and making optimum use of extra leisure time whilst maintaining well-being (physical, mental, and spiritual, although the latter two would not be covered by coaching but by a medical / specialist). A retirement coach will help his client to find meaningful steps toward finding a path to retirement.  By asking the client powerful questions such as the ones that follow, the coach creates a relationship with his client that will allow him/her to make a smooth and meaningful transition for him/her.

How many times do we retire?

Let’s face it, retirees can’t go back in time and start again. Since people generally only retire once from their full-time career, it makes sense to do it right.  Very often, clients have little to no warm-up, no training and if they go beyond the financials, will find very few guidebooks or videos.  Future retirees can ask family members who have gone through retirement but their experience was different from how theirs will be. This is why I am a firm believer in the importance of retirement coaching.

A great retirement coach will have both the experience of helping other future retirees and the expertise in this subject, whilst being fully trained as a coach, and therefore developing a connection with the client to allow him to find the answers from within to look ahead and hold the client to account. Retirement is not simply the end of something but the start of the client’s own Prime Time, and retirement coaching will allow the future retiree to find fulfillment, meaning, and purpose.  I am personally grateful to have found this Certified Program at ICA to allow me to gain this coaching expertise, and I have already learned so much. Thank you.

BIRKEN, Emily Guy, The 5 years before you retire, Kindle Edition, 2014.