We’ve all seen it before, the tennis player losing the point and smashing their racquet. Or the basketball player who, after missing the hoop, throws the ball into the crowd. Or, how about that well-known YouTube clip where the office worker throws the computer monitor out of the cubical?

It is that part of the game or our lives that we often refer to as the mental game. It is that area where we are aware of or, understand ourselves about our surroundings. Roughly speaking, this referred to as emotional intelligence (EI).

Author Travis Bradberry writes, “EI is so critical to success that it accounts for 58% of performance in all types of jobs.” (Bradbury and Greaves 2009:20) Gilbert Enoka, the mental conditioning coach for arguably the greatest sports team of all time, the All Blacks rugby team from New Zealand, is convinced that mastering these mental skills is most certainly the “final frontier” for professional sports. (Bills 2018:384)

Amongst others (Hanin, Laborde, Dosseville, Allen, Meyer, Fletcher), Kopp and Jekauc Point out that there is much consensus within the world of sports psychology that EI plays a key role in sports performance.  (Kopp and Jekauc 2018: no page number)

This paper explores the relationship between performance and EI. It will describe the nature of EI and highlight the importance of EI for high performing sports teams and athletes. The key area this paper attempts to explore is how the mental conditioning coach (MC) can coach athletes and teams in the area of EI thus helping the above to perform at their optimum.

It was Michael Beldoch who, in 1964, first coined the term “emotional intelligence” and Daniel Goleman who popularized the term in his book, “Emotional Intelligence – Why it can matter more than IQ .” (Chowdhury 2020).

Several definitions of EI have been suggested. Here are but a few;

Travis Bradberry offers his definition of EI as, the “ability to recognize and understand emotions in yourself and others, and your ability to use this awareness to manage your behavior and relationships.”  (Bradberry and Greaves 2009:17) Ramsay adds, “… emotional intelligence can be defined as one’s ability to observe, detect, and categorize one’s own emotions as well as those of others, while using this information to inform one’s decisions, thinking, and behavior….” (Doug Ramsay 2017)

In their work, Bradberry and Greaves describe their list using the metaphor of a tree to show how these skills can be grown. Unlike IQ and personality, the pair reminds the reader that EI can be developed: Figure 1: EI as a foundation for a host of critical skill that can grow over time. (Bradberry and Greaves 2009:20)

When one considers the skills above, such as – decision making, accountability, results in achievement, stress tolerance, trust, the ability to control thoughts and feelings, the ability to relate to the emotions of others, and the ability to forget and move on rationally, one can clearly see how EI can impact the performance of those involved in sports at a high level.

EI then is the ability to process one’s perceptions and respond in a logical mature fashion. To understand this concept further, a basic understanding of how the brain deals with perception and response (The Thought Journey) is helpful.

The neuroscientist, Paul Maclean’s “Triune brain theory” proposes that the human brain is made of three interconnected brains or thought centres. As we perceive our world through our senses, our perceptions journey to the brain through the spinal cord.

Our perceptions first encounter our Reptilian or Primitive brain, according to McLean. The Primitive brain deals with the survival state its primary question is, “Am I safe?” Accordingly, it is this part of the brain that deals with the fight, flight and freeze responses. Secondly, our perceptions pass through the Limbic system. The limbic system is the emotional seat of the brain. It is impulsive and powerful. Its primary question is, “Am I loved?”Lastly, our thoughts and perceptions reach the Frontal Cortical Lobes, the Neocortex, known as the rational brain.  This region of the brain is responsible for learning, creativity, logic, reasoning and thinking. Once an appropriate response has been formulated by the brain, it is then sent back through the same pathways for action. (Smerda 2013)

The Two Primary Competencies of EI- Personal and Social 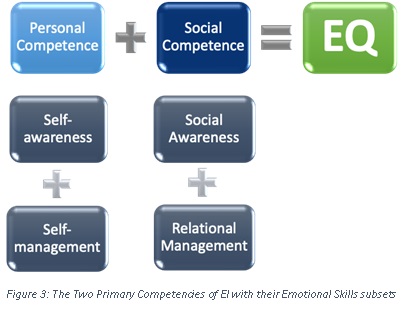 The subset of Personal competencies – self-awareness and self-management.

Self-awareness, Bradberry and Greaves say, is the “ability to accurately perceive one’s emotions at the moment and understand one’s tendencies across situations.” (Bradberry and Greaves 2009:23-24) For the athlete, this may be the awareness of fears, doubts, dreams, self-talk, or expectations from self.

Self-management is the “ability to use one’s awareness of one’s emotions to stay flexible and direct one’s behavior positively. This involves managing one’s emotional reactions to situations and people.” (Bradberry and Greaves 2009:32) Athletes developing self-management must learn to regulate their feelings of disappointments and nervousness or negative self-talk, etc.

The subset of Social competencies – social-awareness and relational management.

“Social awareness is the ability to accurately pick up on emotions in other people and understand what is really going on with them”. (Bradberry and Greaves 2009:32) In the sports environment, most athletes compete in teams and even if they are individual athletes, they compete against competitors. Social awareness includes perceiving the emotions of fellow team members and those of the competition.

Bradberry and Greaves point out that relational management is often the result of mastering the first three emotional skills: Self-awareness, self-management, and social awareness. it is they say, “the ability to use one’s awareness of one’s own emotions and those of others to manage interactions successfully”.  (Bradberry and Greaves 2009:44) Relational management for the athlete would include developing a habit of constructive team talk or the skill of presenting confidence in the face of competition.

When one considers the skills outline by Goleman, Bradberry, and Greaves, above, (such as – decision making, accountability, results in achievement, stress tolerance, trust, the ability to control thoughts and feelings, the ability to relate to the emotions of others and the ability to forget and move on rationally) in comparison to the two Primary competencies of EI, one can clearly see how EI can impact the performance of those involved in sports at a high level.

According to Gallwey, personal performance is, therefore, directly related to the potential where potential is the trained ability and experience to reach a goal. Potential, however, does not ignore challenges. Even the very best of intentions can lose momentum and still be derailed. Gallwey understands these challenges as “interferences”. For high performers, these interferences manifest as external and internal expectations, negative self-talk, unexpected setbacks, and barriers. (Francis 2020:1) To overcome the interference in the Equation, the athlete will need to develop a keen sense of self-awareness, self-management, social awareness & relational management – Emotional Intelligence.

Top athletes must be aware of and be able to regulate their emotions. In the heat of the moment, the athlete can easily change lanes from a “resourceful state of consciousness” to an “unresourceful state.” (Kerr 2013:104) Instincts of survival kick in, the thoughts led by the primitive brain. Athletes become heated, overwhelmed, and tense. The All Blacks call this “Red Head”.  This is contrasted with having a “Blue Head”, where athletes can consider alternatives, understand consequences, and remain focused on the task at hand.  (Kerr 2013:105)

So important is the role of the Mental Conditioning Coach (MC) that Sir Graham Henry, former All Blacks coach, refers to their team’s MC as “the backbone of the whole thing”. (Bills 2018:283)

The acceptance of the MC and the relationship between EI and performance provides sports teams with a unique opportunity to add another weapon to their arsenal for performance. MC’s cannot underplay the value of EI development. So, where to from here? Below are some suggestions:

“58% of performance”. (Bradbury and Greaves 2009:20) The “final frontier” for professional sports. (Bills 2018:384) Underestimating the mental game in sports is irrational. Within the mental game, EI is arguably the greatest weapon an athlete can develop. The development of EI is associated with the decrease of interferences, overall achievement, personal time commitment to the sport, motivation to train, maintaining a “Blue Head” in the competition, and the growth of teamwork.

It is clear that MC’s can play a key role as members of the coaching staff by assisting in the development of EI within the team and individual athletes, thus directly contributing to the performance of the above.

Bills P. 2018 The Jersey: The secrets behind the world’s most successful sports team. Macmillan: London

Chowdhury M.R. 2020 How to improve Emotional Intelligence through training 01 September 2020

Kerr J. 2013 Legacy: What the All Blacks can teach us about the business of life. Constable: London

Kopp, A. and Jekauc, D. 2018The Influence of Emotional Intelligence on Performance in Competitive Sports: A Meta-Analytical Investigation. Sports 2018, vol 6, issue 4, number 175

Tips for Enhancing Your Own Emotional Intelligence: