Application in the Corporate Environment & Lessons for the Coaching Context

This case study provides and overview of the DiSC profiling tool and its practical application.  It reviews how the DiSC tool has been applied within a corporate environment (a New Zealand based multi-national) and then discusses how this could be applied in a Coaching context and environment.  The specific version of DiSC being considered is ‘Everything DiSC’, which proves to be a credible and practical tool with significant use in the Coaching arena.

The organisation is one of the largest in New Zealand, with over 18,000 employees globally.  DiSC has been used within the NZ based businesses for 3 years.  In that time, it has been used as the standard psychometric profiling tool used across the various Business Units.  Psychometric profiling has been used in support of all leadership-related programmes including programmes for First time Leaders, and Managers in broader, more complex Leadership roles.  In addition, it has also been used as part of Functional Pathway programmes (i.e. Sales Leadership; Customer Service).  Finally, it is also used at the Executive/Leadership Level in conjunction with other tools for self-development, such as 360⁰ Feedback surveys.  Over this period, thousands of reports have been created and debriefed.

Essentially, DiSC is a tool for understanding oneself and others better.  Specifically, it focuses on two key dimensions of personality, based on William Moulton Marston’s[2] “Emotions of Normal People” (published back in 1928).  These include:

DiSC was first developed in the 1950’s as a 24 question survey.  This created the basic DiSC model below, with the following four quadrants, which used Marston’s original terminology.  Unfortunately, the language of day don’t fit well with today’s language, so it is necessary to look past the word that the letters derive from to consider what they are trying to describe: 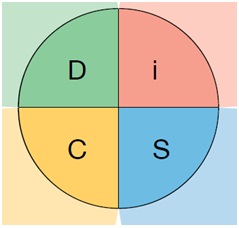 DiSC measures an individual’s tendency towards these quadrants, along with the intensity of this preference.  Typically, we would see people fall predominantly into one of these quadrants (though it is possible to tend  equally across all regions).

If it was left as this four quadrant model, it would provide a simple, ‘rough & ready’ approach to understanding ourselves and others.  It’s worth noting that there are a number of DiSC tools out there in the market.  The  simple four quadrants are what you might see in other free versions of DiSC that are available online.  However, as you might see in other similar tools (i.e.: 16PF; MBTI), there is more complexity within people than just four quadrants could adequately represent.  So to provide more clarity, the ‘Everything  DiSC’ tool cuts the quadrants further into 12 styles – see the circumflex below: 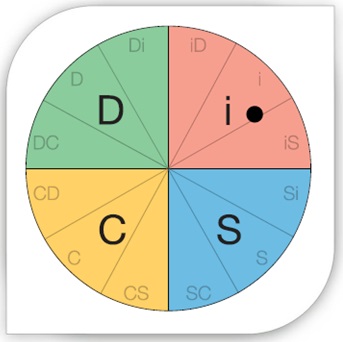 The tool used within this organisation was ‘Everything DiSC’ which (in comparison to some other DiSC tools) utilises ‘adaptive testing’ and a 5 point Likert scale (versus forced choice).  It notices where individuals answer inconsistently and then automatically adds further questions to clarify.  Alternately, it will set further ‘tie-breaker’ questions as needed (so it can identify for example if an individual is sitting as an Si, or and iS, two similar but distinct styles.  This adaptive testing helps ensure ‘very good’ reliability of the testing (with an average Alpha value of 0.87[3] (1.0 being perfect, 0.9 being exceptional).

In addition to the range of DiSC tools in the market, there are also a number of similar psychometric tools that could be used.  This includes