Geert Hofstede developed over decades (2001, 2010) a framework to describe the influence of national culture on values and behavior. Based on his research with employees from IBM worldwide, he could identify six dimensions of cultural significance. The results for Japan are compared to the USA in Graph 1. 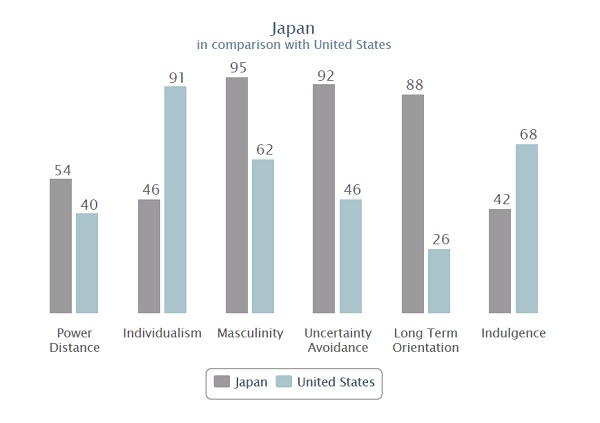 As we can see, this framework offers great insights for coaching to understand better Japanese clients and offer them the best coaching experience possible.

The GLOBE project (Global Leadership and Organizational Behavior Effectiveness Research) took Hofstede’s research findings aimed at exploring the differences of organizational and leadership cultures around the world. Part of their findings, they came up with nine cultural dimensions, names cultural competencies (2004, 2008):

The following graph compares the results of the GLOBE dimensions for Japan and the USA (House et al. 2004, Chhokar et al. 2008). The results differ somewhat to Hofstede’s findings, part of it is due to the methodology employed. We will not get deeper here. What is interesting from a coaching point of view is the addition of a few dimensions to assess and understand better the Japanese culture (especially the moderate level assertiveness and the differentiation of collectivism).

Fons Trompenaars and Charles Hampden-Turner (1997) developed an additional framework for cross-cultural communication applied to general business and management. This model of national culture differences has seven dimensions. Five of them cover the ways in which human beings deal with each other, one deals with time, and one with the environment. They enable some additional input for coaching in Japan.

The last framework presented here has been proposed by Philippe Rosinski (2003). His Cultural Orientations Framework aims at focusing on more relevant and salient aspects of national cultures to enable an exchange and some understanding of cultural characteristics. The Framework knows seven categories associated with several dimensions, as shown below:

We will not get further into details here, since most dimensions have already been addressed as well as their relevant for coaching in Japan. It is interesting here that Rosinski brings the results of established frameworks and integrates them into a new synthesis framework. In addition, Rosinski’s framework is especially intended for the coaching practice and aims at generating discussion and creating awareness. By leveraging differences, it should open new conversations, possibilities and choices and might be a way to work with Japanese clients eager to get to know themselves and there culture more systematically.