Consider this: the average attention span of a goldfish is around 9 seconds while the average attention span of human beings has fallen from 12 seconds to 8 seconds in the last ten years1. Yes, in this fast-paced, media-saturated digital era, we human beings have a lower attention span than goldfish. The emergence of social media may have made it easier for us to stay connected, but how meaningful/ valuable is this ‘connection’ when we can barely remain focused on one thing – much less give proper time and care to those who matter, like our friends and family!

In a corporate context, over the last twenty years,the average life span of S&P 500 companies has fallen drastically from 67 years to a mere 15 years? While emerging technologies are making it easier for companies to do business in a border less manner, it has also disrupted existing business models across all industries.

We live in an era of distraction and disruption. Some call it the Digital era. Klaus Schwab, the convener of the World Economic Forum, calls it the Fourth Industrial Revolution. The changes that we constantly deal with today are not evolutionary. They are revolutionary in nature. What does that mean? Things that we took for granted are no longer true and the things that we did habitually are no longer effective.

What is the relevance of distraction and disruption of the digital era, to coaching practice? What is the relationship between mindfulness and coaching? Why is it more important now, than ever before?

Everybody tells you that you need to be curious or non-judgmental as a coach. You need to be able to “dance in the moment” with your client. You should be able to create that pause that allows you to respond as opposed to react to a situation or a conversation.

But nobody tells you how.

Being non-judgmental, being responsive to the client situation and being present,are difficult traits to master under any circumstances. In today’s era of distraction and disruption, it is even more complicated.

It is further exacerbated by the fact that we humans are not programmed to handle such situations in our default mode. The human brain is inherently lazy. It has been programmed to conserve energy. As a result, we tend to react to situations rather than respond. We tend to be judgmental, as the brain would like to use our existing programming (biases, opinions and beliefs) to drive our behavior.

In other words, we are using outdated software to deal with modern challenges. When I say or do something “without thinking,” that’s the unconscious mind running the show. A reaction is survival-oriented and can be useful in a variety of situations, like avoiding an object thrown at you or getting out of the way of a speeding vehicle. However, it is not useful in “creating awareness” or “reframing perspectives” for our clients.

How does one change one’s default operating model? Can the practice of mindfulness help breakdown old patterns?

Mindfulness and the pause of freewill and growth

What is mindfulness? Simply put, it is ‘Attention with Intention’. The practice of mindfulness is all about creating focus on your breath or on sensations in your body parts. And when your mind wanders off, you gently bring your attention back to the focal point. When this is done repeatedly, the mind gets used to focusing, and bringing the focus back on intention. Similar toa physical workout, this is a gym for your mind and the more you exercise it, the better your mind gets at it.

There is strong scientific evidence that such a practice not only helps at the specific point in time but changes the brain’s entire circuitry forever. The practice of mindfulness helps in upgrading the software as well as the hardware of the human brain2.

As a result, you get better at paying attention. You can make choices and exercise freewill in everyday life situations. You can decide the best course of action based upon human values such as reason and compassion.

Are you reacting or responding? Are you being curious or judgmental? Are you willing to break the pattern of unintentional reacting?Are you able to pay attention to what’s happening in and around your life and intentionally make the choice?

A regular practice of mindfulness helps to ‘create the pause’. The pause is where we have the opportunity to exercise our freewill. It is during this pause that our learning and growth takes place.

Is there scientific evidence to support this?

The Science of mindfulness 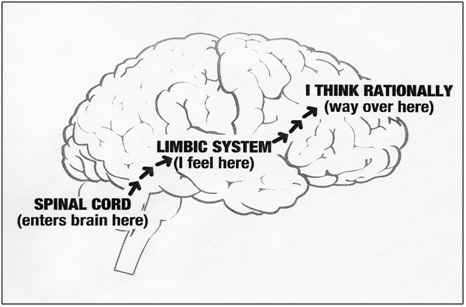 All stimuli enter the brain from the spinal cord at the base of the brain. Then it enters the middle parts of the brain called the amygdalae. The amygdalae are the “house of emotions”. This part of the brain is responsible for the emotional response. The amygdalae release stress hormones like adrenalin and cortisol in response to any situation that may be considered a threat by the brain.

From the amygdalae, the stimulus goes to the front part of the brain, the prefrontal cortex (or PFC). The PFC is the “house of Logic” in the brain and is the most recent development in the evolution of human beings. The PFC is responsible for regulating the emotional response that is based on the amygdalae’s activity.

In situations of extreme stress, the amygdalae release large quantities of adrenalin and cortisol and drown the PFC. The power of emotions overwhelms rationality. That is why when we are emotionally upset or stressed we can’t think straight. This situation is referred to as “Amygdala Hijack” by Daniel Goleman in his book “Emotional Intelligence”.

One of the famous examples of “Amygdala Hijack” is Zinedine Zidane’s head butt during the 2006 World Cup Soccer finals. In front of 28.8 million viewers in 213 countries, Zinedine Zidane, a world-wide soccer role model, lost his self-control and head-butted Marco Materazzi in the 2006 World Cup Soccer finals. Zidane was kicked out of the game. France lost the World Cup to Italy and Zidane’s career ended in disgrace and wonderment – “what was he thinking?” Well, he wasnt.

Another example is Mike Tyson biting Evander Holyfield’s ear in their 1993 title boxing match. His hijack cost him $3 million and his boxing license.

Researchers have found that there is a physical link between the amygdalae and PFC in the form of a nerve-fiber bundle known as “Uncinate Fasciculus”3. The researchers also found that the thickness of this fiber tract is directly proportional to the subject’s ability to deal with anxiety and stress. If the PFC and amygdalae are strongly connected, you tend to show lower levels of anxiety and if the connection is weak, you tend to be more anxious.

What does mindfulness have to do with this?

Therefore, regular practice of mindfulness can help you to create “the pause”, reducing the possibility of an emotional hijack and helping you be more responsive, less judgmental, more curious, more focused and more present.

We are living in the digital era – the era of distraction and disruption. Our attention span has become shorter and traditional business models are getting obliterated at a breakneck speed.

To be an effective coach, we are required to be non-judgmental, to be responsive and to be present. These are difficult traits to master in any circumstances, becoming further complicated in today’s era of distraction and disruption.

A regular practice of mindfulness helps to ‘create the pause’. The pause helps us move from being judgmental to being curious and compassionate. The pause is required for us to respond to a situation rather than react. The pause helps us be in the present and “dance in the moment” during our coaching sessions.

1A survey of Canadian media consumption by Microsoft concluded that the average attention span had fallen to eight seconds, down from 12 in the year 2000. We now have a shorter attention span than goldfish, the study found.