What is “the feminine” or “the masculine”?

But what is “the feminine” or “the masculine”? Clearly what we do know is that neither woman’s nor men’s personalities can be categorized. We as humans carry unpredictable possibilities and potentialities for development. Traits that have been assigned to one or the other sex reflect a given culture’s stereotype rather than anything inherently true for women or men. For example one such particular assignment stems from the nature of each sex’s genital organs, as in the idea that women are receptive and men are aggressive. But any given woman may be more aggressive than any given man, and many men may actualize their inherent receptive tendencies thus confounding the cultural labels. But there seems to be a fundamental inclination, beginning in very early childhood, to sort people and experiences into male and female. The particular qualities associated with either male or female vary from culture to culture, but every culture devises some sense of the masculine and the feminine, and the tendency to sort life into these two categories seems universal.

We may believe that if something is culturally rather than biologically determined, it can be changed. These culturally developed images of maleness and femaleness can be modified only through awareness, reflection and working with them but change is a particularly slow process. We cannot change these stereotypes by willing it; the unconscious has no interest in our injunctions and will continue experiencing ‘thinking’ as masculine and ‘feeling’ as feminine. Perhaps if we try to understand how the unconscious imagines and holds this male and female energy, it may shift its images in response to our interest. This may be the first step to recognizing and understanding how we hold these two principles within us in order to bring about wakefulness. We all must ‘think’ and ‘feel’ to some extent, no matter how unequal the weight we give to the two activities, no matter how highly we value the intellect and how disparaging we may be about our emotional side. I believe it is necessary to confront the tremendous limitation imposed on our nature which leads us to experiencing only one half of the human condition. As masculine or feminine decisions are in themselves not optimal, can there be any doubt that the ideal solution or decision comes from combining the mind and ‘heart’? Coaching has the potential, apart from making individuals conventionally ‘successful’, to develop the integrated human being by cultivating both the masculine and feminine energies. 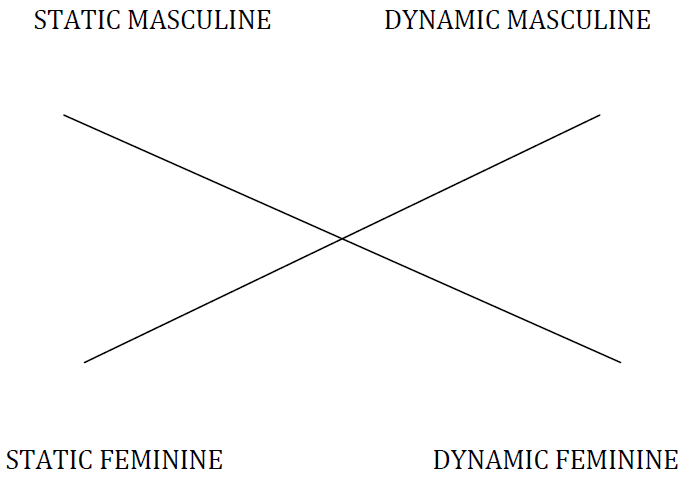 The table below provides an elaboration of each one of the four patterns that, in their totality, represents the full potential of the human being.

While we have been able to see and value various masculine accomplishments and the singular tendency to be goal oriented, it has been harder to appreciate the complementary feminine orientation which tends to put relationships at the centre of life. The core masculine experience emphasizes one’s separateness from the rest of life and values behavior that acts upon it, affecting it, leaving one’s mark on it, dominating and transcending it. The corresponding feminine position emphasizes being immersed in the living world and being linked with all of life and being one link in an infinite chain. It also includes a need for space and solitude, for contemplativeness that has no produce or rationalization for its existence. It is aloneness without an outer goal; the focus is on wanting separateness from others rather than on wanting to accomplish something in opposition to others. One approach is not superior to the other; however, when both are embraced, the full life is experienced.