Knowing yourself is the beginning of all wisdom. Aristotle

In this research paper, I will explain the meaning and beliefs behind the chakra system and their relevance to the coaching process. I believe that the chakra system shows that our body is created to aspire and achieve, enabling us to have greater faith in and stronger results from the coaching process. I have studied the book The Wheels of Life by Anodea Judith (quoted throughout and included in references) who is a world-renowned yoga and chakra expert and applied it to my knowledge of coaching.

What is the chakra system?

Yogis believe at our core there are seven energy centers called chakras. Together they are a ‘formula for wholeness that integrates the mind, body, and spirit’ (Anodea Judith). An understanding and awareness of this system provide a way for us to approach our complex lives.

Overview of the chakras

While each chakra is located in a specific place in the body and has a unique function, it must be well balanced to function effectively. An excessively open chakra could have as negative an impact as a closed or deficient one. The system constantly interacts at a physical and spiritual level to enable us to move forward. This focus can allow us to break restrictive behavioral patterns to achieve our full potential. 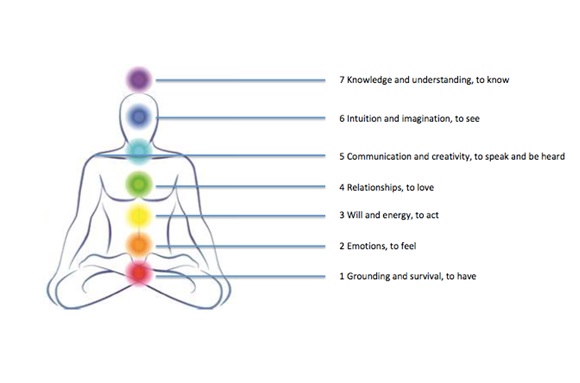 A deeper dive into the chakras

Chakra One – To Have

Through our roots, we gain nourishment, power, stability, and growth. Anodea Judith

Containment and steadiness are the key benefits of this chakra. A strong base allows us ‘to have’ rather than a dream and fantasize. Think of the stress a tree is subjected to through the seasons – branches may be damaged in a storm, a late frost might damage leaf buds –but the roots provide the strength and nourishment needed for it to flourish in the spring. In humans, this grounding chakra allows us to cope with stress, to gain clarity when external factors challenge us. To nurture this chakra we must take care of our bodies: discovering ways to make ourselves feel calm and secure, along with gentle exercise and good nutrition, are key.

To be tender, loving and caring, human beings must be tenderly loved and cared for. Ashley Montagu

Here the grounding nature of chakra one meets emotion. As humans we need physical touch, to be nurtured and loved, to feel safe and secure. The second chakra, alongside a consciousness of our emotions and the stability of chakra, helps us to create movement and allows change.

It is through our will that we liberate ourselves from fixed patterns and create new behavior. Anodea Judith

Judith goes on to state that ‘as we take action, we begin to transform, but the first step is breaking old patterns’. This is the role of the third chakra. The first three chakras work beautifully together – grounding and stability, then movement and change, then the energy and desire to make it happen.

From love we were made. On passion’s waves, our spirit sparked. Anodea Judith

At our center is the fourth chakra, the heart chakra, where the mind and body come together. This chakra spreads love, care, and compassion to ourselves and others. It also energizes and motivates us – we spend time and energy nurturing the people and things we love – and connects us with what is important in life.

Chakra Five – To Speak and Be Heard

Communication resides in the fifth chakra. It is the home of self-expression, creativity, and connection. Communication can be as subtle as observing an ache or pain and figuring out what it means, or as complex and emotional as a deep and honest conversation with a loved one. As Anodea Judith says, ‘communication shapes our reality and creates the future…it is the gateway between the mind and body.’

Judith talks of the power of mantras and how chakra five can support them. Mantras can be effective ‘tools for protecting our minds from the traps of non-productive cycles of thought and action’. They are a way of focusing the mind and moving towards change. ‘A mantra is designed to awaken the mind from its habitual sleep of ignorance’. Judith goes on to talk about creating mantras with even more strength by using the present tense eg “I am strong” rather than “I will be strong”.

The meaning of the sixth chakra is sight and perception. We gather information from what we see with our eyes, but also through intuition. Here, these two vital data sources merge at our third eye, ‘increasing the possibility that (an image) will materialize’ (Anodea Judith)

All acts of creation begin with conception. Anodea Judith
Pray your head is an empty shell, wherein your mind frolics infinitely. Sanskrit Proverb

At the seventh chakra, we reach enlightenment – the other chakras converge to bring awareness, possibility, and manifestation. This chakra ‘is the pervading consciousness that thinks, reasons, and gives form and focus to our activities’ (Anodea Judith).

The following table shows how the chakra system can be applied to the GROW coaching model.

For several years my client dreamed of leaving her career in recruitment and retraining to be a nutritionist. But it never seemed like the right time and she had a lot of self-doubt about taking the plunge, given that her current career provided financial security. Her life changed dramatically when she had a baby and moved abroad – the client felt these changes were a hurdle, a further delay to her dream. Through coaching and focusing on the chakras she decided she wanted to switch her mindset from repression and lack of control to possibility, opportunity, and growth.

The chakras gave the client a structure she already understood and believed in through her yoga practice. This, alongside the principles of coaching, enabled her to grow in confidence and make this long-standing dream a reality that her current situation enhanced rather than hindered. Here is the process:

I worked with the client on her awareness and consciousness. Through a greater understanding of her current situation, she could understand the potential barriers to her dream –child care, time commitment, the financial investment, self-belief – but also the possibilities – a future career that better suited her life now she was a mother, focusing on things other than raising a child, using her brain, regaining the confidence she had lost as a new mum. She was excited and wanted to make it happen.

This is the information-gathering stage. What resources did she need to gather to choose the right course? How could she manage some of the practical issues she felt stood in her way? What did her intuition tell her and how could she channel it?

Chakra 5 – to speak and be heard

We talked about the importance of studying for the new qualification. Saying it out loud and being heard by a coach validated her plans and decisions, and helped her commit to making them a reality. The client also came up with a mantra to support her plans and help move her towards her goal.

I supported the client in understanding how her plan fitted with her relationships and the rest of her life.  Who could support her through her studies? What specifically did she need from each person? This moved her idea to study away from just a concept to something more tangible that had a place in her life.

Now the dream was close to becoming a reality. She had addressed potential barriers, gathered support, and had all the resources she needed to make a decision. The client’s growing excitement and commitment gave the idea of energy and movement. This enabled her to sign up for a course, study hard, and achieve her qualification.

As her studies progressed the client developed an emotional attachment to the course she was taking. She truly believed in what she was learning and could see the benefits it was having on the rest of her life, not least her growing confidence. At times the intensity of the course alongside the rest of her life challenged her, but her deep connection to her work helped her through those times.

The client graduated from her course but she knew it didn’t end there. A key part of using the chakra system with coaching is the importance of self-care and grounding practices. To create a stable base for my client to grow, I worked with her to consider what she could do to look after herself physically and emotionally. Yoga, time in nature, gentle exercise, cooking nourishing foods and delicious treats, spending time with family, laughing, and having fun all supported the client to achieve her dream and conceive future ones.

The chakra system is fluid, working in both directions. The above is an example of how a dream became reality, but reality also supports dreaming. Once something has been achieved and is a tangible thing, a person can dare to imagine safe in the knowledge that anything is possible.

The chakra system shows that humans are naturally created to have dreams and aspirations, and figure out the best path to realize them. It’s at our core, as natural as breathing. As coaches, we believe our clients know what is best for themselves, that they hold the answers and it’s our role to ask powerful questions that set the client on the right path to awareness, exploration, and action. An understanding of the chakra system alongside trust in the coaching process can give confidence to both coach and client that it’s possible to make dreams a reality.

Wheels of Life, a classic guide to the chakra system by Anodea Judith

Graphic of chakras in the human body