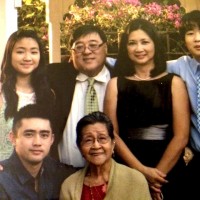 I am proud to include my family photo above to display an example of an INTERGENERATION CULTURE, a representation of the different generations of our time, from a Traditionalist (my 90 year old mother) to my 13 year old daughter (Gen Z).  The objective of this research paper is to study the differences of 5 Generations and how coaching can play a critical role, specifically in the workplace.

For perhaps the first time in history, it is not unusual to encounter perhaps not five, but four generations participating in the workforce simultaneously. Navigating the differences is forcing managers to up their game, turning from one-size-fits-all techniques to management philosophies tailored to the new intergenerational office.

With people living longer and staying in the workplace longer, these generations are likely to find themselves working (and living) together. Popular literature suggests that ones generation makes a difference in work ethic, values and career expectations with a resulting potential for collision, conflict and confusion between the generations.

First, let’s take a look at these differences.  Each generation has been influenced by Generational Signposts.

Generational Signposts are the major historical events, social trends, and cultural phenomena of a generation. Generational Signposts shape ideas about everything from expectations and perceptions about what the working environment will provide and how people should behave as employees, to company loyalty and work ethic: 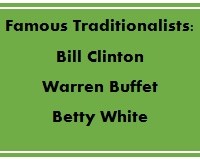 The Traditional Generation—also known as Veterans, the Silent Generation and the Greatest Generation—comprises employees and retirees born between 1922 and 1945 who are continuing to lead and/or contribute to organizations or are re-entering the workforce. These older Americans hold three-quarters of the nation’s wealth and are the executive leaders of some of the most established and influential companies in America.

This group not only survived the Great Depression of the 1930s but was instrumental in shaping the United States as an economic and military power. Patriotism, teamwork, “doing more with less” and a task-orientation very much define this generation. Rules of conduct, respect for authority and following directions are all very important touch points for this generation. Employees of the Traditional Generation are the keepers of the organization’s past and founding goals and beliefs. They are your organization’s historians.

The Baby Boomers got their name from the big growth in population just after World War II. Born between 1946-1964 they are the largest generation, in numbers, that the planet has ever seen. They are now predominantly in their late 40s and 50s and well-established in their careers. They grew up in traditional family structures in times of steady economic growth, believing in expansion and welfare. They still make up the strongest segment of the workforce, although many are in retirement or planning to be in retirement within the next 10-15 years.   Boomers share a “live to work” mentality but also belief strongly in individualism. They are described as hardworking, competitive and motivated by position and prestige. Recognition, integrity and job security are important to them. No previous generation has experienced such dramatic changes in educational, economic and social opportunities. Challenges Baby Boomers might have to face are typically related to new information technologies.

Generation X was brought up very differently from the Boomers. They were the first latchkey kids, due to the rising divorce rates in the 1970s and the fact that both parents had to work. A result of the Gen-X childhood, they gained independence and self-reliance at an early age. The two generations are also different in terms of spare time activities: while the Baby Boomers spent their childhood playing outdoors, Gen Xers often watched television or played video games. This different lifestyle led of course to new attitudes and a different set of goals. They also differ from the former generation in terms of work ethics. Although Gen X (1965-1980) likes “to work hard and play hard” they want to find a balance between work and life: “Work to live not live to work” that’s their motto. Flexible working hours, the opportunity to work from home, autonomy at work and time off are appreciated. Gen Xers are motivated to produce fast results and use information technology to make time for other activities. Generally unimpressed by superiors, this generation only accepts instructions and rules when they are convincing.

And what are characteristics of Gen Y? That’s not yet easy to conclude, since they are the youngest generation working and still having many years ahead of them to develop. It’s obvious that this generation (1986-1997) is very familiar with and addicted to digital technologies and social media. It’s not unusual to be plugged-in 24 hours a day and 7 days a week. This generation has a much closer relationship with their parents than any other previous generation and is often described as pampered and overprotected. No other generation has had so many possibilities to enjoy a good education studying abroad and travelling around the world. So it’s not surprising that Gen Y is confident, ambitious and achievement-oriented. They have high expectations of their employers looking for meaningful projects and a steep learning curve. They don’t distinguish between work and leisure time: for them both are inseparable. Gen Yers love teamwork but prefer to have a team leader. They are said to be a pragmatic and multitasking generation, less concerned about political and environmental issues than any other generation before.  Most recently, a “Millenial Branding” survey of 18-29 Facebook profiles revealed that the job title “owner” is the 5th most popular one listed by folks under 30.  This showed the researchers that these young people are starting or running their own businesses or freelancing, and even if their companies won’t succeed, they are demonstrating “an unprecendented entrepreneurial spirit”. 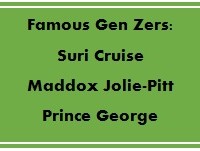 Generation Z (also known as Generation M for multitasking, Generation C for Connected Generation, the Net Generation or the iGeneration) is a common name in the US and other Western nations for the group of people born roughly from the second half of the 1990s through to the late 2000s or early 2010’s, a span of 15-20 years in the very late 20th and very early 21st centuries. This generation is currently growing up in the 2010’s decade, as children and younger teens, which some citations show that the oldest members are entering adulthood as of 2012.

This new generation has been uniquely shaped by nearly a decade of war and economic uncertainty: Those born in 1990 were 11 years old on 9/11, and ever since we have been at war. They finished high school in 2008, just as the Great Recession began. Now they’re graduating amidst a stumbling “recovery” in which unemployment remains stubbornly high, especially for those younger than 25.

These 9-21 year olds are just starting to define themselves. It’s the most diverse generation the world has ever seen comfortable within the global context and the challenges of working across boundaries. They are “digital natives” who have grown up deeply immersed in the web of technology and inter-connectivity. They are motivated to serve, particularly through volunteerism, but appear to be following Generation Y’s trend of political disengagement. They are also facing one of the toughest economies we’ve experienced since the “Greatest Generation” of the Great Depression era, encouraging them to think about alternative career pathways as they struggle with the debt earlier generations have saddled them with. 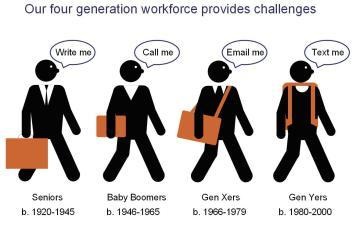 “The main communication tools for the post-war generation (65-70 year olds) were newspapers, radio programs and movies,” explains Philippe Baumgarten, Krauthammer consultant. “The Baby Boomers grew up with TV, cassette recorders and landline phones, whereas Generation X was the first to play video games and to work on computers.” And Gen Y? “They are constantly connected, whether it’s text, Facebook, Twitter or any other application. They don’t need a phone at work, as they prefer Skype and instant messaging. If you would rather send an e-mail than using social media tools, you are probably over 40. Companies should pay close attention to the different communication needs of their employees,” adds Philippe.

The process of learning has changed too. The post-war generation was introduced to new tasks by shadowing and mentoring. First they had to observe and then they were allowed to do it on their own. “Within the post-war generation you could only be a manager if you had gained enough experience,” comments Philippe. The Baby Boomers still started in very hierarchically structured working systems, whereas nowadays they are used to ownership and flat hierarchy. They have learnt to adapt to new technology and information systems. Gen X workers focus on continuous improvement of processes in manufacturing, engineering, and business management. “They are influenced by the Kaizen philosophy, which is based upon continuous improvement and respect for people. When it’s done correctly it eliminates excessively hard work and humanizes the workplace,” says Philippe. And Gen Y? Its members certainly channel surf fast and do not always go into depth, but they have a great ability to absorb and process information quickly. Web surfing and networking have made Generation Y workers competent, efficient and productive. “They are able to pool knowledge very quickly,” continues Philippe. “Companies would do well to utilize these abilities by putting in place less complex information systems which facilitate sharing. However, Gen Y actually needs a framework which enables its members to operate in trial and error mode. And they do need a longer integration period with some guidance,” concludes Philippe.

The perception of when it’s time to look for a new challenge and to quit the old job has also shortened from generation to generation. Many Baby Boomers have spent their entire working life in less than five different companies, whereas Gen X moved on a lot faster changing company every 5-6 years. Gen Y, having witnessed Gen X frequently changing careers and looking for improvement on a personal and professional level, feels even less committed. This is supported by companies downsizing due to economic upheavals or globalization.

“We are wrong if we think that Generation Y isn’t loyal at all,” comments Philippe. “If we can offer an appropriate system of rewards, and praise them frequently and spontaneously, it’s possible to win their loyalty. It’s important to encourage them regularly.” However, if a Gen Yer does not like the job, the management or the work schedule, she or he will look for alternatives.