the needs of others. 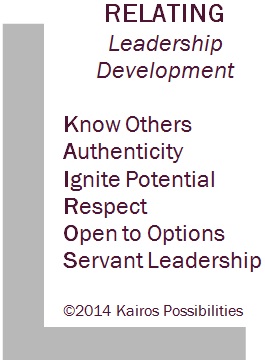 Kairos time cannot be pinned down on a linear scale and is not equally experienced by all people. Kairos time includes emotions and actions, beliefs and values. It incorporates your past, present, and future, and illuminates your purpose. It can be an instance or a season.

At Kairos Possibilities, this stage is entitled Relating. At this stage of purpose, seekers recognizes the importance of their interaction with the people and environment around them. They are empowered by their potential. They act with authenticity and servant leadership which allows them to express their purpose in their relationship to others. In this stage, the Purpose Effect extends beyond the individual to the environment—including people around the seeker. Purpose at this stage is not about manipulation and control of the environment, rather it is about discovering the multitude of options available to the seeker to live intentionally with and on purpose and to serve others.

Stage 3:  Recovering—“It’a All About All OF US”

This stage is often considered a spiritual calling. We are able to integrate all aspects of our life and understand how they are connected to our life today. We have great clarity around our purpose and are able to articulate it in a simple sentence. We perceive ourselves as ordinary people with extra-ordinary lives. We know we can make a difference in the lives of everyone we

meet. Purpose is perceived as coming through the self and used for the sake of all others. This stage is entitled Doing at Kairos Possibilities. This is the stage where the seeker unites with others to create a story of hope for the future. The seeker is capable of authoring not only their future, but the future of those around them. This phase is marked by unique creativity in self-expression while maintaining a firm foundation in reality. By giving to others, the Purpose Effect is given back exponentially to the seeker. Purpose is expressed by being in service to something greater than ourselves.

Coaching is an appropriate process for supporting seekers to find and live a life based on and enriched with purpose. There are numerous tools and surveys the coach and seeker can use to assist this process. One such tool, a 10-week group coaching process has been developed by The Blue Zone Project™ to encourage community members to discover their as means to increase their health and well-being as well as the health and well-being of the community. 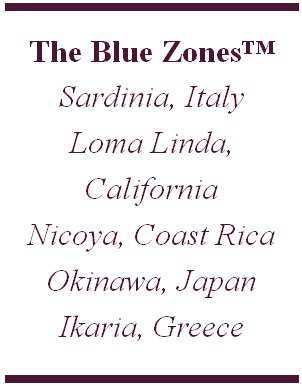 Five geographical communities around the world have been identified as places where people live longer, healthier, and happier lives. Dan Buettner calls these communities Blue Zones™. These communities share common threads in lifestyle, diets and outlook. Buettner concluded that these cultures have passed on positive habits over many generations that have resulted in the long, healthy, and happy lives of their members. Following years of interviewing the oldest members of and living in these communities, Buettner describes these common habits as the Power 9™. Having a sense of purpose is one of the traits. (Buettner, 2012)

As a result of this research, Buettner partnered with Healthways, to create the Blue Zones Project™. Healthways is committed to creating comprehensive solutions that make the world a better place one person at a time by improving well-being and decreasing health care costs. The Blue Zones Project™ is an initiative of Healthways that is designed to create community well-being. It focuses on permanent changes to the environment, policy and social networks to make healthy choices easier for community members. Moais, i.e. small groups, are created for walking, cooking, book reading, gardening, purpose building and other reasons. Moais are the structure through which group coaching takes place. These moais are an integral part of the Blue Zones Project™ as they provide a small group to support and sustain the community members. (Healthways, 2014) Three communities in southern California, collectively known as the Beach Cities, were chosen to pilot the Blue Zones Project™ in 2009. The Beach Cities embraced the initiative to create a community that is more walkable, bikable, healthy, and socially engaged—where the healthy choice is the easier, more appealing choice. (BCHD, 2013) Beach Cities Health District reported a significant increase in well-being within the community as a result of the Blue Zones Project™. In the first three years of the project, 2009-2012, there was a drop in obesity and smoking, and a boost in exercise and healthy eating. The Beach Cities now proudly display their commitment to the Blue Zones™ way of life with their designation as Blue Zones™ Communities. Currently there are cities in Iowa, Texas and Hawaii that are in the process of becoming Blue Zone™ Communities. One of the goals of this project is to help people deepen their sense of purpose by discovering, uncovering, and/or recovering their values, strengths, and passions through participation in a 10-week Purpose Moai. A Purpose Moai is essentially a group of individuals, usually unknown to each other initially, who meet together for 10-weeks in a small group coaching setting to seek their purpose in life. A Purpose Moai Participant’s Guide was developed by the Inventure Group for the Blue Zones Project™ as a resource for the facilitation of the moais.

Seekers commit to attend a Purpose Moai as a result of having attended a Purpose Workshop. Purpose Workshops are held quarterly in the community and provide an overview of the value of Blue Zones Project™ and evidence of the value of a life lived on and for purpose. Coaches, designated Purpose Conveners, are trained by the Blue Zone Project™ coordinators to convene the Purpose Moais. Moai sessions are conducted weekly for 10-weeks. Depending on the number of participants, the sessions run from 1-2 hours. The seekers continue supporting one another after the conclusion of the formal sessions in order to sustain change.

Each lesson begins with an introduction and thought provoking self-reflection to preferably be done before the weekly sessions. The group coaching sessions are opportunities for the seekers to share their journey of discovery. Three to five questions are provided each week to take the exploration to a deeper level. The guide also contains additional resources for the seeker to use to continue their purpose quest.

The topics for each of the ten sessions are as follows:

Reflections as a Purpose Convener

I had the privilege of being a convener of two Purpose Moai. The seekers in both groups had recently attended a community Purpose Workshop sponsored by the Beach Cities Health District (BCHD) Blue Zones Project™. The participants paid a nominal fee for the workshop but attended the Purpose Moai without charge. As a convener I was not paid for my facilitation of the moais. The seekers were unknown to each other prior to the beginning of the moais. I had not met any of the seekers prior to the forming of the moais. For each moai, I contacted the individual members to determine the best time and place to hold the weekly meetings. Both moais met for two hours once a week.

The seekers in both moais ranged from 35 to 62 years of age. The majority of the seekers were in the midst of career/life transitions. None were employed at the start of the moai. Some of the participants had become displaced workers as the result of an illness or disability or because they were caring for an elderly or ill family member. Others were stay-at-home moms whose children were now in school full time. While some of the attendees were also engaged in a job search, most were in the moai because the topic of purpose sounded interesting and they were interested in meeting new people. One woman was in the midst of retiring from her 30-year career and determined to remain active.

Five women and one man committed to the 2013 moai. The 2013 moai chose to meet at a local coffee house that had small areas of grouped sofas and chairs. This was a comfortable environment for our weekly gatherings. However, being that it was in a commercial business the participants and I felt pressured to purchase food and/or beverages. It was also difficult to hear at times because of conversations by other patrons. Occasionally we had a difficult time reserving an area large enough to accommodate our group.