Covey, Merrill and Merrill (1994) stated that the most important attributes for children, youth and adults are the knowledge, attitudes, and skills related to living, loving, learning and leaving a legacy. Living with purpose, having personal mission where their values, principles and personal attributes are associated with that mission. Seligman (2002) would add that each person should have a full knowledge of his or her personal strengths and incorporated into a personal mission statement.

These attributes described by Pink, Robinson, Covey, Merrill and Merrill requires the education system to undertake a major “make-over” before it can be incorporated into the classrooms. Ken Robinson in his TED 2010 speech titled “bring on the learning revolution”, suggested to move from the current industrial model, where essentially everything is standardised to a model based more on the principles of agricultural, to recognize that human flourishing is not a mechanical process, it’s an organic process. And one cannot predict the outcome of human development; all one can do, like a farmer, is create the conditions under which they will begin to flourish.

Similarly, the leaders of today also need to be equipped with these attributes in order to survive this new age, particularly when increasingly, middle managers are becoming more and more important for institutional and organisational leadership. They are required to make decision and lead their units and the corporation as a whole due to the fast-paced changes of the Conceptual Age.

The Solution: Adapting the Coaching Approach

To overcome the above mentioned challenges and adequately prepare our children, youth and adults for the Conceptual Age and survive this rapidly changing era, the Professional Coaching Community holds one of the important keys to the solutions.

In more ways than one, professional coaching principles are tightly aligned with the development of human capacities for the Conceptual Age. The attributes required for success described by Pink, Robinson, Seligman, Covey, Merrill and Merrill above, are the day to day work that a professional coach would perform with a client over a coaching session.

The definition of coaching can be said as

Professional coaches provide an ongoing partnership designed to help clients produce fulfilling results in their personal and professional lives. Coaches help people improve their performances and enhance the quality of their lives. Coaches are trained to listen, to observe and to customize their approach to individual client needs. They seek to elicit solutions and strategies from the client; they believe the client is naturally creative and resourceful. The coach’s job is to provide support to enhance the skills, resources, and creativity that the client already has. (ICA, 2010)

The following coaching model provides a framework that could apply to individuals or groups in helping them to acquire the necessary attributes needed to survive the Conceptual Age, whether they operate in a classroom or at a boardroom: 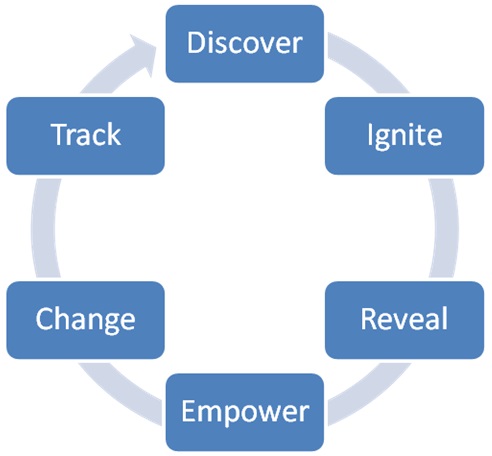 Coaching for leaders across the organisations

In particular, executive coaches can effectively work with middle managers to improve their leadership qualities through performance coaching, as well as help these managers to become better leaders and decision makers by transferring the coaching skills such as attentive listening, powerful questioning, acknowledgement of others and positive feedback.

A great example is Bridge Partnership, who has helped Cadbury Plc. to win Silver at the “2010 Learning In Practice Awards”, sponsored by Chief Learning Officer magazine for the Leading for Performance programme.  Their coaching program has been designed to develop a global leadership program for senior / middle managers. This is being ran across the globe in the Americas, Europe, Australia and Asia.

Coaching for the next generation leaders

Further, coaches can work with educators to become “coach-approach” educators and create conditions under which each student will begin to flourish, discover their talents and reaches maximum potentials.

Coaching techniques and elements should be incorporated in teacher training courses so that they will become more effective in cultivating more creativity and innovations in our young people.

There are already some great works undertaken by a hand full of coaching companies that are reaping great rewards. One such example is Sue Stokely, co-founder and managing director of  Coach in a box, a specialist coaching company  that has worked extensively with schools in the UK, said:

Coaching can be a hugely rewarding experience, not only for the receiver of the coaching but also for the coaches themselves. Creating a culture within a school or college where pupils, teachers, staff and leaders alike are willing to be coached and to coach others can foster a vibrant learning environment fit for 21st century education. (2010 Association of School and College Leaders)

The rise of the Conceptual Age see the world economy moving towards an increasingly values-based economy, a shift in paradigm where an approach that balances creativity with a need for accountability is required. It will be highly beneficial and effective to incorporate coaching approaches in the development of strong leaders and managers in all types of business organisations, as well as in the educational systems for the development of the next young generations.

Adapting a coach approach at the grass-root level such as the classrooms, all the way to boardrooms where key decisions are made, is one of the key to survive and succeed in this rapidly changing world.