Coaching for Flow: facilitating flow in the client’s everyday experience

The second type of interventions mentioned above, i.e. those attempting to assist individuals in finding flow (Nakamura & Csikszentmihalyi, 2002), can be applied to the coaching process. This could be called coaching for flow, aiming at transforming the everyday experience of the client by increasing the frequency of flow experiences. This is another objective at which the “flow enhancing model of coaching” of Wesson & Boniwell (2007) aims.

In the previous sections the elements boosting and characterizing flow have been described in detail. In this section the same elements will be presented from a coaching process perspective, providing examples on how coaches can use these elements to foster flow in the client’s everyday experience.

Supporting the client in setting clear goals is an integral part of coaching (Wesson & Boniwell, 2007). Different models can be adopted to facilitate this process, such as SMART or GROW models. Setting clear goals support the client in conceptualizing and facing the challenge, committing themselves to the task at their best (Wesson & Boniwell, 2007).

With no clear goals, it is not possible for the client to elicit the experience of flow, as there is no clear direction in which to channel attention.

According to Wesson & Boniwell (2007), "flow theory implies that clients are happiest setting which they feel are just slightly beyond their capabilities". This, and the element described below, accompany the client along a growth process.

The optimal match between perceived challenges and skills is crucial for the optimal experience. 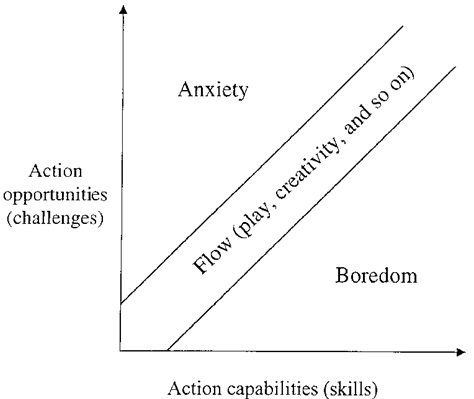 The coach can help the client to understand these mechanisms and find his/her way to reach conditions of flow, limiting anxiety and boredom.

Britton (2008) explains how she uses the flow diagram reported below (Figure 2) as “a visual aid in job coaching discussions between employees and supervisors”. When people are in boredom and anxiety states in working environments, they start to be disengaged and search for satisfaction elsewhere. A supervisor can work with the employee to understand where he/she is in the visual proposed, and work with the employee to understand how to change things to reach a condition of flow (Britton, 2008). 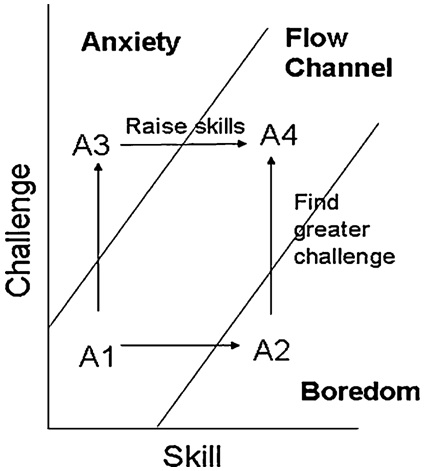 When an individual is experiencing flow, attention is focused and there is a good level of awareness on how the person is performing. Thus, it is important that “any feedback given by the coach is accurate and can be challenged” (Wesson & Boniwell, 2007). Feedback maintains the individual “centered in reality” (Kaufman, 2006).

Kaufmann (2006) highlights that feedback isn’t necessarily external, as inner clarity seems crucial. With this respect, Wesson & Boniwell (2007), in their the “flow enhancing model of coaching”, suggest a series of interventions to deepen the self-knowledge of the client, such as noting thoughts in a logbook while performing the activity and reflecting about these later on, or adopting thinking tools such as Mind mapping (Buzan & Buzan, 2003) and Ishikawa fishbone diagrams (Cameron, 2001). Wesson & Boniwell (2007) suggest “by reflecting on activities in this way it is possible to consolidate emerging ideas and consider new ways forward”.

In order to enter and remain in the flow state, it is essential to be completely focused on the task at hand, leaving no room for the intrusion of other thoughts or worries. Csikszentmihalyi (2008) highlights that most jobs and home life in general lack the pressing demands of flow experiences, making concentration rare.

According to Kauffman (2006, 2005 b), a coach can support the client in managing the “dialectical tension between transcending the moment and also being completely aware of and flexibly responding to new information coming at the periphery”. She takes the example of blinders, that come and go as needed. A coach can help the client to open up to understand what’s happening, and then refocus at the action at hand.

According to Kauffman (2006), a coach can help a client with exercises to increase mindful focus on the present and detach from the outcome.

Kauffmann (2006) refers to “time transformation” and states that this element is hard to coach in a direct way. She suggests laser-like visualization techniques to help client build the perception skill. Another way is to have clients intensively evoke past flow experiences to possibly make it easier for them to replicate and elicit this state experience.

The research conducted suggests that there are many potential applications of the flow theory to coaching, both in coaching conversations and in the coaching process, to increase the frequency of positive flow experiences in clients’ lives. Further research on flow application to coaching is needed. One possible area of further development could be analyzing the phenomenon of “social flow” and its potential application to group and team coaching.