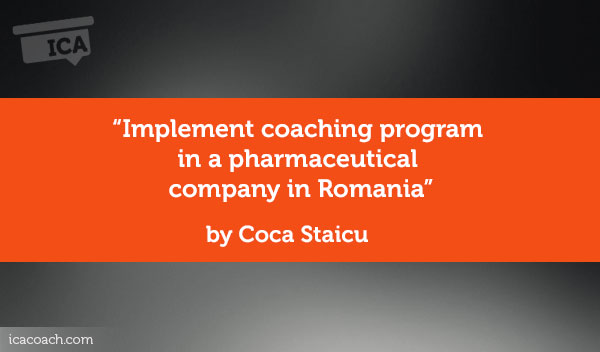 In a changing market, both from legal and strategic point of view, A SRL has decided to implement a skills and knowledge development programmed in order to grow and develop the business in Romania.

The need for change came in the time in which the sales teams did not achieve the established goals, the turnover of the sales force was high, and the individual and organization performance have been in a constant decrease. Considering the company objectives on short and medium term, a revival of the department of sales was wanted, revival that will bring a consistency of results in a short time. The focus was performance improvement from both quantitatively and qualitatively point of view. Up to that time, the development of skills was achieved through training and monitoring teams in the activity. After analyse a few development and performance improvement packages, the company chose a coaching program that encompasses three stages and which has been implemented at all management levels.

The first step in this direction was to create and to develop a managerial and organizational culture. The final objective was to have competitive teams at all hierarchical levels, which collaborate in order to achieve the company financial goals.

The first step was to implement a coaching program for the first level of management, extended it in the next 6 months for the main operational team, sales force represented by division sales and medical promotion, and also involve the marketing department.

So at the end of the first semester of last year, the top management team consisting of 8 people, Country Manager (CM), 3 Business Unit Manager (BUM) Marketing Manager ( MM), Financial Director (FD) Sales Force Effectiveness (SFE) and the HR Director, participated to the first stage of team development. The process was carried out for 4 days, and the team have been assisted by a external coach. This session objectives were:


The processes that have been analyzed were: the way in which decisions are made, solving the tasks, getting results, organization of meetings, adjust the information flow in the team and interdepartmental. The first part was focused on identifying the current strengths and challenges. Starting from these, the skills have been structured, with sub-competent required for each management in the company. The second part of the process was focused on learning a new approach, using coaching. The use of coaching will be based on the development of a new culture in the organization, so that the middle management to acknowledge their individually contribution, but also as a team to achieve company objectives. After completing the fundamentals of coaching and the skills needed by a coach, these topics have been practiced and integrated , being centered on solving some current situations in the top management meetings. If at the beginning of the exercise, the participants were reserved in applying the coaching methods, along with getting some effective results, they have identified that through the use of coaching the meetings can be more focused and clear on the established subject. The next stage of the programme for top management was the use of coaching in the individual discussions with employees. For one month the top management participated in the sessions of the supervision and mentoring under the guidance of an external coach. At the end of the process, managers have acquired specific coach skills and they understood it’s usefulness in achieving the objectives. Still in this step, the internal training team have been composed, and it was coordinated by the SFE and consists of 3 ASM, a Product Manager (PM), two medical representatives and a sales representative. The next stage was scheduled for the middle of the second trimester and consisted in the development of the coaching and training skills of the internal training team, so that it will be ready to participate in the development process of the entire organization.

The process was coordinated by an external coach and it lasted for one month. During this month, the participants have been pulled out of their daily activity, being involved only in the process of learning and developing the new competencies. The first objective was to understand and implement the new organizational culture, based mainly on accountability, delegation processes and identification of a transmitting way of the information flow in both directions, all these being necessary in order to achieve the company objectives.

In this stage, participants understood that change comes from within each of them, that it is a continuous process that can shape a stable future.

The first part of the training was focused on develop the trainers team’s ability to sustain the trainings for ASM. RM and RV teams. For each level specific development areas have identified and emphasis was placed on the process of ownership, efficient time management, decision-making in the case of the RM and RV and, in addition, for ASM, on the process of delegation and development facilitation and coaching skills. This part was facilitated by SFE under the guidance of an external coach.

The second part was conducted by an external coach over three weeks and consisted of learning the skills of coaching. Participants supervision was made by SFE and coach, and as clients were colleagues from marketing and finance departments.

At the beginning of June, a team of 12 ASM and 3 PM have been involved in a 10 days training program spread over 2 months (June and July) in order to acquire the coaching skills for managers and product managers. Besides train these managers, these meetings were used to raise awareness at the organization level, as the existence of an internal culture and active coaching can bring results within a much shorter time with fewer material resources.

During this two months, participants had access to new forms of knowledge and awareness of own needs, but in particular of the needs of subordinates by acquiring coaching skills , but in particular through the practice of coaching during the course, the moment in which they were supervised by SFE and external coach, receiving feedback and directions for improvement.

The next step, after middle-management completed the training and supervision in coaching, was the implementation of new business concept among the sales force. For this, was chosen as strategy to involve the entire sales team in identifying the RM and RV needed competences and how to recognize these competent by ASM. This part of the process was divided in two: a survey sent to the sales team which revealed the 12 most important competences of a sales representative and a workshop in which representatives to bring input in the development of the identified competencies.

The Workshop was scheduled in September, for one day, during a cycle-meeting. It was coordinated by an external coach together with top management team. The sales team has been divided into 12 teams, each coordinated by an ASM, to which joined the colleagues from the marketing department. The teams were required to extract a competence which then to deepen in teams. The role of this exercise was accountability and ownership of the new strategies of embedding the coaching at the organizational level. During this exercise, ASM had the opportunity to use the acquired coaching skills and thus to facilitate the communication within the team in which they worked.

At the end of the workshop, a set of necessary competencies and behaviours have been obtained. These new competencies have been agreed and accepted more easily by the sales team, because they have been involved in the competencies design process.

The process of change continued in the second part of September with an assessment of the sales team in their daily activity, in order to determine which are the most important competencies necessary to be improved for customizing the next stage of development of the organization.

The RM and RV assessment was made by ASM, SFE and two external coaches. The assessment was done according with the competencies necessary for the correct planning of targeted clients in alignment with quantitative targets , but also according with necessary soft for the achievement of qualitative objectives. The visits with RM and RV were divided between the two assessors, the ASM and the supervisor, following that on the day of assessment to be coached by the ASM, and at the end of the day to receive feedback from the ASM and supervisor, and together with ASM to identify new ways of improvement. The day ended with a supervision session of the ASM, in which the focus was how he used the coach skills during the day, they received feedback about their work and possible directions of improvement.

After these steps, within the organization an improvement was observed in terms of performance related to the quantitative objectives, but also an improvement of the processes of interdepartmental communication.

The next stage of the process was training the sales team in order to improve the skills of planning and sale. In this regard, training’s with very clear directions have been organized, focused on the following two aspects:


In this regard, the most important skills that needed improvement have achieved.

The whole process of accommodation and change of the vision of the sales team was finalized at the end of October, after the training’s have been conducted.

As a continuous strategy, it was agreed:


After less than half a year since the coaching was implemented as a tool for increasing performance and motivation within the organization, the desired results began to appear. The changes produced at the level of the organization, have been significant, but without having a negative impact on the teams. The results obtained being in agreement with the initial plans, can be summarized as following:
In conclusion, the implementation of coaching as a tool of personal development in organizations leads to empowerment, involvement and motivation of which who are part of the process. They are the result of assimilate certain skills like active listening, accompanying clients, keeping you neutral toward customer’s problem.