As I have grown through my journey in the International Coaching Academy, my coaching experience has also grown into cross-cultural arenas. I have become aware that unless the client’s culture is integrated into the coaching process, the possibility of sustained long-term success is diminished. I am African and the impact of these cultural underpinnings is critical. More specifically, my experience is that a clear awareness of cultural dynamics is important in the highly diversified African society.

The Merriam-Webster dictionary defines culture as:

According to sociologists, culture consists of the values, beliefs, systems of language, communication, and practices that people share in common and that can be used to define them as a collective. The lush and diverse African culture varies not only from one country to another but within each country as well. The vast majority of people living in Africa are indigenous but over centuries, people from all over the world have migrated to Africa. Arabs crossed into North Africa from the Middle East bringing Islam with them. Europeans, bringing Christianity, settled in the southern parts alongside South Asians that mainly settled in Uganda, Kenya, Tanzania, and South Africa. Though much of traditional customs have remained, African culture has consequently become interlaced with cultures from around the world.

Africans are thus shaped by profound diversities in cultures, languages, and traditions. In addition to dealing with these issues, they are forced to deal with a legacy of colonial mentality and Western paternalistic tendencies. While confronted with the demands of competition in global markets controlled by fast mutating technology, other fundamental basic issues of poverty, unemployment, social inequality, and lack of infrastructure and resources, simultaneously overshadow their discourse.

Each ethnic group in Africa has customs that are unique to their culture and which are delightfully embroidered into Africans like a colorful and diverse tapestry. These customs matter to African clients because it is vital to shaping their social relationships, preserving and confronting social order, their perception of the world and their place in it, and influencing their day-to-day actions and experiences in their society.

For the African client, the concept of “self” is united and intermingled with the world including the natural and social environment. As an African, it is through my relations with my community and surroundings that my desires, actions, and decisions affect the entire group rather than just myself. The Xhosa proverb, “Umuntu ngumuntu ngabantu,” (“A person is a person through persons”) illustrates this and is common to different African cultures and languages, albeit articulated in different ways.

I was approached by an African living in the United Kingdom for coaching. I asked him what brought him to coaching and me. He responded by explaining that his organization had paid for him to be coached by a coach in North America and thereafter by a coach in Europe and neither of the two worked for him. “They did not understand me; they could not get where I was coming from and I felt that they wanted me to be Western in my thinking and perception of the world,” he explained. He craved to be understood so that he could be himself and then be supported to achieve his objectives in the manner that he desired.

To make an impact on an African client, the coach must appreciate the African milieu. While not excluding the western influence and value to coaching, it is critical to tailor them to effectively speak to the African’s unique challenges and experiences. The value and insights inherent in the western tools and competencies must be harnessed and used to their full potential to achieve the desired outcomes of African clients in a manner that speaks to their reality, embeds trust, and boosts the coaching experience.

An effective coach for an African dares to get to a personal and thorough knowledge of their client and then, without judging, acknowledges their heterogeneity. This establishes affinity between the coach and the client which creates and sustains an environment in which trust would be built and thrive. The affinity and the trust-laden environment are fundamental to the African client’s coaching experience. It is only at this point that the African can embrace the coaching relationship and open up to being supported to get a clear vision of self, their journey, and desired endgame. Without these two elements, the client would struggle to be open and authentic which would, in turn, restrict the ability of the coach to gain candid insight into the client’s journey reflecting their challenges, choices, actions, successes, etc.

Once this deep bond has been solidified, the coach’s competencies can be put to work. Without this, the traditional approach of kicking off with the identification of the desired outcome would be dead on arrival. Instead, the coach must start by enclosing the traditional process within the context of the challenges facing the client, focus on them and only then, develop a tactical action plan.  The Chairman of the Africa Board for Coaching, Consulting, and Coaching Psychology (ABCCCP), Dr. Mongezi Makhalima, calls this a ‘fit-for-purpose’ approach that requires coaches to be extremely versatile and able to adapt their approach to suit each situation.

The coach starts by creating affinity with the client and holding the trust-laden space that affords the client room to think through challenges and approaches. The coach should spend time allowing the client to simply ‘be’, develop a stronger understanding of self and their milieu, unlock their strategic thinking which determines what needs to be done to achieve set objectives.  This approach affirms the coach as an empathetic companion capable of creating a place of safety and creativity.

To enable the coach to effectively create this safe and creative space, coach training, specifically in the African context, must equip coaches with the competency of listening, attending, and discerning; shifting from mere questioning to informed inquiry. Though this is not necessarily unique to coaching an African client, the level of awareness of the context and milieu of the client makes it distinct. To achieve this level of awareness, a coach must blend the following:

These are indispensable to an effective coaching experience within the African context. This approach has no formula but has become dramatically necessary and relevant in our contemporary fast-changing and volatile world controlled by an action-directed approach where the pressure to perform is rising in an increasingly virtual workplace.

A common thread that I have experienced in my African clients, particularly those in a leadership position, is their yearning to be motivated into action. Facing myriad issues across all spectrums of society, surrounded by negativity, pressured from all sides to perform, and with a keen desire to make a rapid impact, the African leader is beset by the sheer magnitude of the herculean task they face alongside fear and self-doubt.

Within the African context, this is made all the more challenging due to the realities and tensions inherent between taking action and just being; between international, worldwide, and local; and between the individual and the communal. This easily depletes the motivation of the African leader.  When African leader is coached to approach these contrasts with clarity, acceptance, confidence, and truth, they can be motivated into action, reclaim their resilient spirit, perform effectively and achieve their goals.

Consequently, clear, specific, and strategic action that achieves targeted results needs to be a critical focus of their coaching. This must be accomplished in a manner that is aligned to the indigenous practices in Africa and reinforced by modern research. With this approach, the coach can unleash the client’s transformation.

A critical difficulty faced at work, home, school, and social interactions is that communication misunderstandings, conflicts, and problems across cultures are often based on very diverse approaches people adopt for resolving differences with one another. Consequently, the client’s capacity to understand and effectively respond to cultural differences in communication and conflict styles cannot be over-emphasized.

The challenge is often the lack of an adequate foundation for grasping cultural differences in handling conflictual situations. I recently came across the Intercultural Conflict Style (ICS) model which is an innovative, four-quadrant intercultural conflict style model, developed by Dr. Hammer. It provides a roadmap to how people use specific culturally grounded strategies for communicating ideas, resolving disagreements, and dealing with emotional upset. 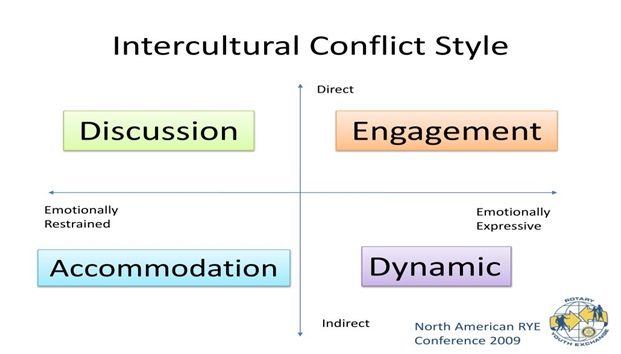 The ICS assesses conflict by measuring the degree of direct versus indirect approach and emotional restraint versus emotional expressiveness during times of conflict. This could be a useful tool within the diverse African context. Combining these approaches results in four cross-cultural conflict resolution styles: Discussion, Engagement, Accommodation, and Dynamic.

The ICS is designed to provide a cross-culturally valid and reliable assessment of a person’s core approach to solving problems and resolving disputes with others. The assessment tool brings the benefit of refocusing energy from blame and shame for inappropriate behavior surrounding conflict to the different styles within each culture. It enables the awareness that people behave by their home culture and do not necessarily intend to disrespect others. The coach would invite members of the team to study the descriptions in Table 1 above, think about a recent conflict with a person from another cultural or ethnic background, and review how that ethnic group or society tends to handle conflict. For illustration purposes only, Africans could be spread geographically in Table 2 below. 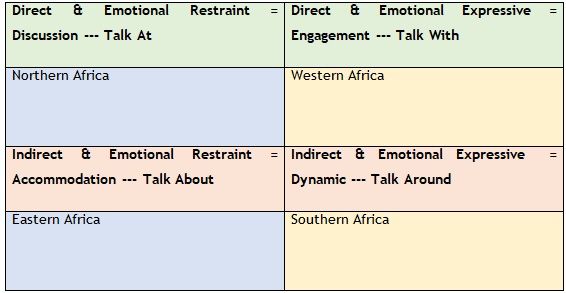 The awareness created within the team members would have the anticipated effect of releasing existing hostility within the team. The coach would support the team members to reframe the perspective of bad behavior and disrespect to one of the differences in nationality and culture. At this point, the coaching would be focused on individual and team use of the information in very specific situations.

Culture, with all that it represents, permeates every society, especially in Africa where each country reflects an abundance of ethnicities. Coaching has increasingly become an important tool to help Africans deal with the personal and business challenges which shape their daily reality. It is thus not practical to coach an African without grasping the cultural heritage of the individual. To coach African clients effectively, the coach must tailor the western coaching competencies to understand and objectively query the influences that bear on their African clients and how they are discerned in their life, society, and/or workplace.

In coaching, the point of contact is to unearth the issue that can result in the most permanent and sustainable transformation. To successfully support the African Client to achieve such transformation, the coach must apply a blend of focus on the humanity of coaching with the client’s macro-context and micro-context. 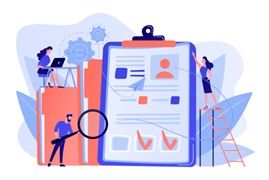 In practice, to successfully coach your African client, you would have to adapt your proficiencies to include: