In my ACED coaching model, awareness is the cornerstone of the coaching approach.  In fact, self-awareness has been a buzzword in my organization in recent years as it comes to realize how this plays a critical role in leadership practice and development. Many have done extensive research into self-awareness and have similar definitions of the term.  Looking at the more recent year’s research, one may notice that the increasing interest in self-awareness came about possibly due to Daniel Goleman’s work on Emotional Intelligence.  In his book, he shared that emotional intelligence encompasses the following skills:

Self-awareness is then defined as the ability to recognize a feeling as it is happening to you.

Shelley Duval and Robert Wicklund (1972) proposed that self-awareness means at a given moment, people can focus attention on the self or the external environment. They noted that

When we focus our attention on ourselves, we evaluate and compare our current behavior to our internal standards and values. We become self-conscious as objective evaluators of ourselves.

This clearly aligns with coaching practice where coaches help their clients to become more self-aware to enable mindset shifts, action planning, and growth.  This is a critical skill for coaches and an important step in coaching.  Coaches rely very much on the active partnership with their clients, where the coach creates a safe space and rapport with his client to enable the meaningful conversation to take place.  These conversations open up opportunities for the coach to help the client to be more self-aware.

Beyond the conversations, coaches may leverage assessments to provide additional insights and increase the client’s self-awareness in various aspects such as priorities, values, needs, strengths, personality, behavior, and interpersonal preferences.  The usage of such assessment tools could prove to be extremely valuable when chosen appropriately to meet the client’s needs.

This research paper aims to share the various tools I have researched or used in the course of my career as a Learning & Development Specialist, as well as to share some of the applications and examples of how some of these tools could be used.

The table below provides an overview of some of the commonly used assessment tools in the market, as well as the possible applications of the tools. 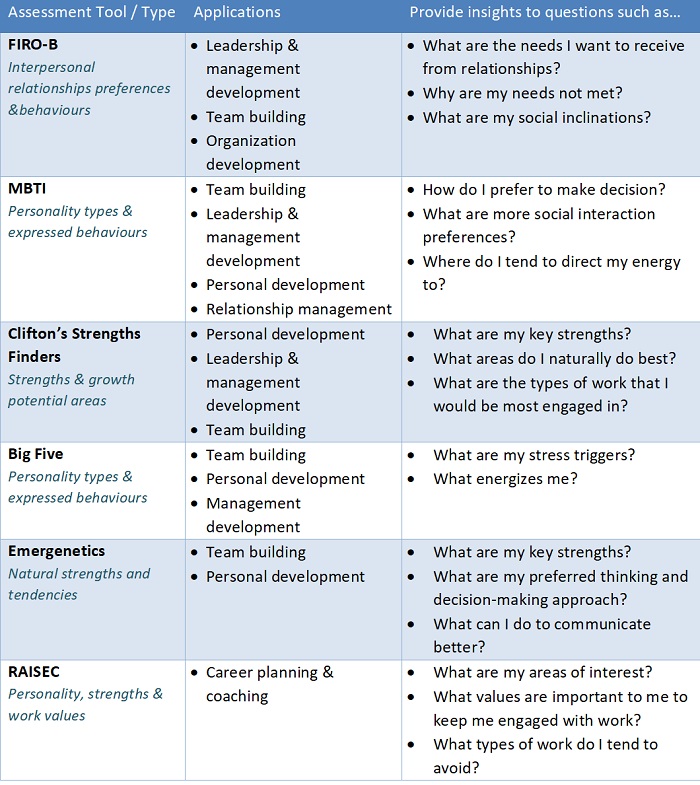 Beyond this, coaches may also be asked to review 360-degree feedback assessment reports with their clients if engaged by their organizations that run such exercises.  This would require the coach to have an understanding of the framework used for the 360-degree feedback assessment and support the client in gaining self-awareness through the report, identifying his developmental focus, and putting down a development action plan.

Janice was recently assigned as a team leader to lead a small team of 5 members in delivering social services to the needy in their office locality.  Janice was delighted with her new appointment and made efforts to build rapport with her team by planning regular team lunches, celebrating team members’ birthdays, and inviting them to her house during festivities.  The first few months went quite well, and she felt she had built that connection with her team.

From the 6th month onwards, she noticed that the team members stopped asking her out for lunches or had corridor talks amongst themselves.  They stopped involving her casual after-work activities as well and she wondered if she had made any mistakes in her interaction with the team.  She felt apprehensive about checking in with her team and wondered if she was not suitable for the role.  She decided to seek out coaching to decide on her next steps.

After understanding her coaching goal and needs, Janice’s coach recommended she do a FIRO-B assessment to gain more awareness about her own interpersonal needs.

Her coach went through Janice’s FIRO-B scores with the below findings:

The Coach affirmed Janice’s leadership style as an inclusive leader, where it was very much second nature to her to ensure she had everyone included in relevant meetings, initiatives, or social gatherings.  However, unaware to her, she had been rather selective with the events she would attend when she was invited.  As Janice reflected upon her social interactions with friends, team members, and peers, she came to realize a pattern.  She had no doubt been consistent with her invitations to the team members whenever there were meetings or social gatherings that she organized, but she had turned down almost all of their invitations for after-work drinks and bowling games because of her natural preference for more intimate chats and interactions with close friends and loved ones.  The mixed signals she had been sending to the team would have been most confusing to grapple with, driving uncertainty in getting to know her and possibly a sense of distrust in her.

With the awareness she gathered about herself, she made a point to attend more of the after-work activities when she was invited and was more mindful about maintaining a consistent interpersonal interaction approach with her team.  She also decided to share this discovery about herself with her team member on an appropriate platform, to allow them to understand her better.

The team appreciated her openness and her courage to be vulnerable to share her FIRO-B findings with them that they asked to do a similar assessment, and sharing their profiles with the team, to foster better team understanding.

Paul was exasperated at the state of his work and performance.  He had always been a star performer in his organization, rising through the ranks at a faster pace than his peers who joined at the same time.  His first 5 years as a sales analyst provided the organization with powerful insights to develop effective marketing and sales strategies that increased the profit margins significantly.  His supervisor felt Paul had the potential to develop in other areas and recommended he to move to the sales team to develop other competencies, with plans to groom him for higher leadership positions.

Paul was ecstatic with the opportunity but ever since he took on the role of leading a small sales team, he had not been meeting his work targets and constantly felt stressed and overwhelmed.  His supervisor was equally frustrated with Paul’s performance and did not understand how his star performer could perform so badly.  After several difficult conversations with Paul, his supervisor consulted the Human Resources team who referred Paul to see a coach.

After understanding Paul’s concerns and coaching goal, the Coach suggested for Paul to do an Emergenetics profiling assessment to gain insights into his natural strengths and tendencies. Paul’s profile showed up his natural strengths in Analytical (blue) and Structural (green).  These strengths had served him well in his previous role as an analyst.  His introverted and easy-going nature had not placed him well in this current role where he often found it exhausting after a day of sales meetings with various clients.  This also aligned with the fact that his natural strengths did not lie in the Social (red) spectrum.  The increased social interaction in the new role constantly drained Paul’s energy and had started to affect his personal social life as well.

After gaining better self-awareness of his natural strengths and tendencies, Paul decided to use the remaining of his coaching sessions to identify his longer-term career goal and development plans to acquire skills to support his growth.  The insights gave him clarity on his stress points and areas of development, enabling him to make a more informed decision on the career pathway he would like to explore.

With his newfound clarity on his natural strengths and development plan, Paul was ready to have a career conversation with his supervisor to address his current challenge at work.  After understanding Paul’s natural strengths and challenges, Paul’s supervisor was able to align with Paul’s suggested development plan and deploy him to the strategic planning team to allow extend his skillsets, at the same time leveraging on his analytical strengths.

A change of portfolio proved to be a successful one.  Paul felt sufficiently stretched and challenged in his new role in extending his skillsets to engage stakeholders. At the same time, he felt motivated and engaged when he had the opportunity to use his strengths to develop long-term business strategies that were beneficial for the company’s growth.

That said, it would not be wise for a Coach to be overly reliant on psychometric tools as a means to deliver coaching as each client has differing preferences and levels of comfort in using such assessment tools.  It would be useful for the Coach to consider the following questions when before suggesting the usage of psychometric tools.

Aside from the above questions, the Coach would also have to consider if the tool would provide the insights that could serve the Client’s needs, as well as the Client’s receptiveness towards using an assessment tool.  The Coach also has the ethical obligation to refer the Client to a licensed practitioner to conduct and debrief on the assessment if he is not licensed to do so.

*Hyperlinked within the paper.