I have seen many articles and blog posts written about whether there is a future market for life coaches.  I’m sure it is a question every potential coach has considered when they are weighing up training to be a coach. Relief is immediately felt when conclusions tend to err on the positive side.

But as I began to carve out my niche as a coach and allow myself to explore my underlying passion for those at the start of their careers – fresh out of university and ready to hit the real world, I automatically feel uncomfortable. Yes the logic makes sense that the idea with more coaches in the world, the greater the spread of understanding about what coaching can do for you.  Surely that is the biggest hurdle we as life coaches encounter – people knowing what we do?  But, what if the population that is coming through is different to ours?  They know what being coached is about but what if they don’t want to be coached in the manner we have been trained?

Generational research is everywhere if you start to look… there is so much perceived power in the need to understand the workforce and there is now a very lucrative market focusing on showing businesses how to deal with the y-generation. Despite streams and streams of research many believe that this generation failed to alter the workplace and made far less demands than were expected but what if there is a generation that is changing all that?  And what ultimately does that mean to coaching as we know it?

Ever wondered why you just can’t understand what someone older or younger than you is talking about?  Or however hard you try you just can’t work out what motivates them?  According to generational research it is simple – we just act differently to each other because we are in a different generation to others.

However crass we have all been allocated into different groups, affected by the way in which we were brought up and the environmental conditions we experienced – be it wars, terrorist attacks and innovation. There is even debate about what the next generation will be called the favourite being Alpha Generation but it is too early for us to be able to make too many conclusions about what they will bring.  Whatever any of the groups are named  (many have several names) there is definitely some insight into how we behave and interact with the world.

What generational group are you in? Use Chart 1 to find out… NB please bear in mind that the dates do vary slightly from one writer to the next, so if you are on the boundary look at the ones before and after to see if one suits you better. The focus of this article will be on the last two groups – Generation Y (otherwise know as the Millennials) and Generation Z or the I-Generation. 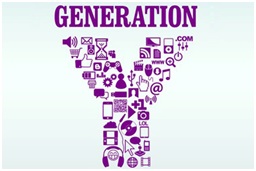 Generation Y: Why should I work for you?

Gen Y broadly speaking should all have entered the workplace or certainly enough of them have for us to review how they have impacted the future of coaching. In fact, Williams in “Wired for Success” states this generation currently makes up 75% of the workplace.

They are a generation used to being hand held by their parents (umbrella parenting).  Their parents are the ones that have asked the teachers when there is a problem at school “what are you doing to fix it?” believing that they have paid for a service and the school needs to help find a solution regardless if it is due to misbehavior or difficulty learning or the teacher’s inefficiency. They have questioned some of the other generations’ perceptions of authority and have also been sure of their own worth in a way other generations have not. This is a generation who felt the entitlement to ask “why should I work for you?” rather than “what should I do to make you want me to work for you?”

They were a generation expected to change everything we knew in the workplace but then September 11th happened and all of a sudden things changed. Suddenly the job market they were so entitled too shrunk and with that opportunities at the beginning of careers became scarce. The potential impact on the working environment has therefore been somewhat smaller than was anticipated.

There are heaps more anecdotal soundbites and research continues to be released about this generation.  However, returning to the original question about whether we need to alter our coaching and whether there really is a market for coaching. It is my belief based on developing and coaching this age group and also from the research I have completed that the difference between Gen Y and previous generations is not big enough to really see much of an impact on the way we coach.

In fact, there may even be a better market in this generation for coaching. Gen Y are used to constant feedback, tailored/individual attention and therefore crave to have the same in their working life.  Consequently, the demands that they set on employers are more tailored to the type of development offered by coaching rather than broad based classroom learning. A representative of London School of Economics careers service in fact stated when I spoke to her that although their students often do not know what coaching is before they meet, once they understand they really appreciate the space for them to explore their own choices and they are finding coaching skills really help to clarify their career options. Being exposed to the coaching style earlier on in their careers will mean that they are used to the concept faster.

A 2014 study by Fidelity Investments on Gen Y found that having a good work-life balance was the most important element for them to consider when choosing a career. This also potentially could lead to a need for more coaching for Gen Y in order to find that balance.

So, sigh a breath of relief –   it is my belief that Generation Y should not impact our coaching practices.

I-Generation:  You Only live once

Whereas when Gen Y were hitting universities there was a huge amount of research conducted, The I-Generation is only just starting to see the limelight. There are therefore far fewer studies to review.

To explore this generation and its potential impact on the coaching market, we will focus first on some of the core attributes that are highlighted to be associated with this generation:

Rather than the overwhelming hand holding parents that Generation Y had, IGeners have had parents who have had access to the largest amount of child-raising advice of any generation. Through this advice they have learnt to take a step back from directing their offspring to encouraging them to be more self-sufficient and to take more responsibility for their thinking; to be able to stand on their own feet rather than relying on others. They are not subjected to hundreds of different extra curricular activities settling more for less formal learning time with the focus on exploration. More and more parents have also taken their children’s education into their own hands and home schooled. Generation X mothers are not so desperate to push a feminist agenda and therefore have been happier to give up work to do this. This has therefore created independence in I-Geners.

They are a generation who know that they can get all the information they need online and if they want to know something rather than having to wait for the information to be passed to them they can research it themselves. This increases their independence and allows them to go after whatever they want quicker, 29 % of the population that Lucozade Energy researched in their Gen-Erators: Z study stated that their main goal was to live the life they want and have the freedom to achieve their goals.

There is also an increase been noted in the desire of this population to be entrepreneurs. They are a generation who have been brought up with much more exposure to start-ups than previous years, where reality television has focused on entrepreneurs bidding for funding. In fact the Gen-Erators:Z study found that 62% of 16- 25 year olds would like to have their own business or brand entity.