You are here: Home » COACH PORTFOLIOS » Power Tools » Power Tool: Self Assured vs. Self Doubt Defined as: To be confident in one’s own ability or character.

Wouldn’t it feel wonderful if we lived every day of our lives in complete self-assuredness? Always knowing that we are where we are in life because of our strengths, abilities, intelligence, and character? Feeling confident that we paved our own ways with perfection after perfection and in return were celebrated with success from the fruits of our labor. It seems that some people do live their lives this way and never have a moment of self-doubt… or do they? And is this always a good thing? Might there be a chance that some may mistake self-assuredness for arrogance or being egotistical? (Synonyms according to Merriam-Webster)

Defined as: lack of confidence in oneself and one’s abilities.

Is having zero self-doubt really what makes someone self-assured, or even successful? Doubt is a normal element of being human. Having some doubt can be healthy and can sometimes be the conduit for continuous improvement, high achievement, and creating change. So is it self-doubt that holds us back? Or is it our judgments about ourselves in times of doubt that hold us back? Are self-assuredness and self-doubt mutually exclusive? Is there a way for the two to be in harmony? Is it our judgment about these words or descriptions that get in our way and cause us to have perspectives that do not serve us? 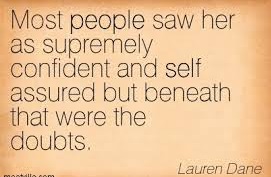 What is our judgment about that statement? For many, it would be that the doubts somehow caused a deficiency. However what if we changed our perspective a bit to consider that the doubts may have just been the things that helped her be supremely confident and self assured. It’s likely our belief that the word “but” and what comes after it, discredits the positives stated prior. Also the word “beneath” implies there are things below the surface that were dark, looming, or negative. What if we changed the word “but” in the above to “and” – might this change our perspective that doubts were negative and somehow instead positive, or at least neutral? And what if we changed the word “beneath” to say something like “along the way” to seem more complementary or at least thoughts that could be rationalized.

Wikipedia defines Impostor Syndrome as: a psychological phenomenon in which people are unable to internalize their accomplishments. Despite external evidence of their competence, those with the syndrome remain convinced that they are frauds and do not deserve the success they have achieved. Proof of success is dismissed as luck, timing, or as a result of deceiving others into thinking they are more intelligent and competent than they believe themselves to be. Notably, impostor syndrome is particularly common among high-achieving women. The Impostor Syndrome or Phenomenon was first formally identified by Pauline Rose Clance & Suzanne Imes in 1978.

While both men and women experience the impostor syndrome, studies show that women are more often affected and more likely to suffer the consequences. Those affected by the syndrome or phenomenon are continuously burdened with self-doubt and self-defeating thoughts. According to Valerie Young, Ed.D, and author of the book The Secret Thoughts of Successful Women, boys are raised to bluff and exaggerate. Girls on the other hand, learn early to distrust their opinions and stifle their voices. They discover they are judged by the highest physical, behavioral and intellectual standards. Perfection becomes the goal, and every flaw, mistake or criticism is internalized – slowly hollowing out self-confidence.

Even those women who escaped childhood with a relatively strong sense of self will face more than just a psychological barrier. “A real bias against female competence persists,” says Young. “Being female means you and your work automatically stands a greater chance of being ignored, discounted, trivialized, devalued or otherwise taken less seriously than a man’s.” That means even a slight fear of inferiority or self-doubt may be further compounded by stereotypes of women’s perceived abilities.

Women whom most would consider to be extremely successful have struggled with feelings of being an impostor. Sheryl Sandberg once attended a Harvard University speech called “Feeling Like a Fraud” and decided they were speaking directly to her. Sonia Sotomayor was “too embarrassed” to ask questions while at Princeton University, and said “I am always looking over my shoulder wondering if I measure up.” Meryl Streep gets “cold feet” before every new project and told a reporter in 2002, “I don’t know how to act anyway, so why am I doing this?”

Despite being plagued by self-doubt, these women climbed to the highest peaks of success. Many more, however remain unable to overcome these feelings.

Karen is a very high performing Senior Manager in a top global consulting firm. She is in the information security consulting field, which is highly male dominated. Karen’s performance consistently receives the highest accolades and recognition. She is on the path to Partner in this firm.

Karen continuously struggles with self-doubt. She wonders if she is really cut out to become a Partner. She worries that she will never be as good or as broadly knowledgeable as her male counterparts. She feels that she has been successful to date largely because she has focused in a small niche area of her field and questions whether she can be successful in a role such as Partner where she has to perform in a much broader space. She privately admits to her coach that she is the “poster child for the imposter syndrome.” She worries that others’ will discover that she does not have the broad knowledge or ability to be a successful Partner.

Karen continuously compares herself to her male counterparts and feels that she will “never be as good or as knowledgeable or as skilled as them.” Each time she is given a new assignment, she has significant anxiety that she will not be successful, that she does not have the knowledge or ability for the assignment and that she will “fail.” She is a self proclaimed “perfectionist” which often times causes her to feel that she needs to work two or three times as hard as her male counterparts. She tends to over-prepare, obsess over details, and then she worries that she will be seen as an operator rather than a leader. Often times she contemplates whether she would be better off just continuing as an operator and move into a strictly operations position and forgo the leadership role of Partner.

As a coach, we can support our clients in becoming more aware of how their thoughts, emotions, and perspectives are not serving them.

In Karen’s case, we explored (and continue to explore) new ways for her to understand her feelings, the causes or underlying beliefs, as well as new ways to frame her perspectives about her performance and abilities. Together we worked on creating a space for Karen to recognize and celebrate her achievements; to truly understand her role in these achievements, and to look at her successes from a new perspective as a leader.

We have explored underlying and limiting beliefs that have caused Karen to have auto-reactions that are not serving her. We’ve used mirroring, acknowledgement & celebrating success, journaling, visualization, and powerful questioning (to name a few) to uncover fears, re-frame perspectives, build a more internalized sense of self worth, to map out new visions and perspectives – ones that serve her in a more positive manner. We’ve explored the value of self-doubt, where it can be useful to improve performance and obtain high achievement, but also where it can be limiting and self-defeating.

We continue to work together to enable Karen to discover her own self-awareness, re-frame her perspectives, and focus on the emotions and actions that serve her in a positive, successful manner.