The torrent of research and opinion touting empathy as vital to effective business leadership (Bass, 1985; Wilson, 2015; Humphrey 2002) was still flowing when the backlash started. Skeptics began expressing wariness and even outright hostility (Bloom 2016) toward the role of empathy in the workplace. The debate continues, as both sides miss an essential truth – not all empathy is created equal.

Empathy is defined as “the ability to comprehend another’s feelings and to re-experience them oneself”. Empathy represents one of the most important aspects of emotionally intelligent behaviour (Salovey & Mayer, 1990,pp.194-195). Empathy involves both a cognitive (understanding another’s state) and an affective (sharing another’s state) component (Eisenberg, 2000). Great leadership hinges on understanding the difference and how to harness the unique power of each.

Cognitive empathy is what allows leaders to balance their relationships by creating a comforting, friendly atmosphere with their employees, while also encouraging the latter’s self-efficacy. This level of clarity benefits everyone involved in the interaction. At the same time, the leader can perform well on executive skills. Also, research indicates that leaders with higher levels of cognitive empathy experience a greater sense of well-being, personal growth, and career satisfaction. Using cognitive empathy requires leaders to think about feelings rather than to feel them directly. Cognitive empathy is an outgrowth of self-awareness.

Affective empathy can likewise help leaders build trust, rapport, and cooperation. This is important for ensuring employee engagement, but it may work against an objective decision-making process.  In heavy doses, affective empathy can also have other side effects. Studies have shown that physicians who strongly identify with their patients’ emotions suffer personal distress and a decline in professional performance (Lamothe et al, 2014), and are prone to emotional exhaustion (Girgis, Hansen & Goldstein, 2009). While most executives aren’t dealing with life or death issues, the stakes often feel just as high. Business leaders who can’t keep some emotional balance from the problems of the people they see at work every day may be as susceptible as doctors to burnout.

Empathy can be learned and controlled

Goleman (2011) argued that the antidote for affective empathy that can lead to emotional exhaustion is “emotional self-management skills”, which can help the client keep emotional empathy in balance. On the other hand, leaders low in empathy possess a more antisocial orientation towards employees, engaging in aggression and unethical decision making (Detert, Trevino & Sweitzer, 2008). There is a false assumption that empathy is a matter of personality rather than skill. It is proven that empathy can be taught as a skill and is already being taught in medical schools around the world and departments of nursing. Of course, as Norfolk et al. (2007) mentioned the first in empathy is to be motivated and engaged to understand the client’s perspective and communicate that to the client through effective communication.

Challenges involved in the above experience:

Not to disappoint the employee

Perspectives, beliefs and feelings present in the above experience:

In social and emotional learning method what is important is to strengthen cognitive control. For instance, in school children when they are confronted with an upsetting problem they taught them to think of the red traffic light which means to stop, calm down and think before acting out. The stronger their cognitive control the less susceptible they are to distraction. Similarly, with adults and leaders, they can be coached and learn to practice mindfulness.  Mindfulness is about changing the relationship between our thoughts and feelings. Mindfulness creates the space between thoughts, emotions and actions which is important for leaders who are more into the heart to heart emotional empathy.

In the book of Chade-Meng Tan (2012), there are several steps that can be taken in order to regulate emotions through mindfulness and thus learn to use cognitive empathy. The one model below it is called the Siberian North Railroad:

Goldin(2008) argued that emotional state can rapidly shift into fear or anxiety, this reactivity takes place in the limbic system (emotional brain) which then gives signals to other parts of the brain in order to regulate emotions that’s why people experience changes in the way of thinking (not thinking clearly), their attention and behaviour. This is what happens when we are “hijacked” by our emotions. 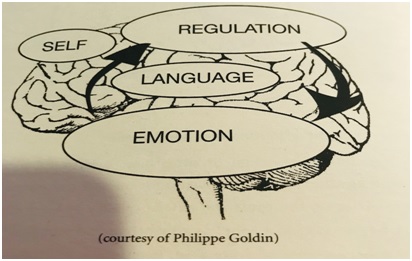 Coaching to balance empathy needs more than one session and leaders need time to practice mindfulness. Through coaching, leaders can become fully aware of their emotions, thoughts and achieve new learning as to how to respond instead of reacting.

Some questions that can help leaders to succeed are:

Lamothe, M., Boujut, E., Zenasni, F., Sultan, S. (2014). To be or not be empathic: the combined role of empathic concern and perspective-taking in understanding burnout in general practice. BMC Family Practice, 15(15), 1-7.

Wilson III, E. (2015). Empathy is still lacking in the Leaders that need it most, HBR.org.