Knowing yourself is the beginning of all wisdom.― Aristotle

One of the most rewarding experiences a coach can have is to know a client has realized a shift in the perspective of their current reality and an understanding of how they can move forward in ways that are of greater benefit to themselves and others in their lives.  Gaining awareness is often the first step.  This coaching tool is meant to offer the reader some basics about the difference between living in “drama” and living in “self-empowerment”.

Katherine was 18 months old when her father’s passion to head west from the Midwest overtook him.  He left for California and asked his wife and baby to follow him.  So she made the bus trip with Katherine to meet her young husband.  As hard as she tried to adjust to her new life, she desperately missed the support of her family.  It just didn’t work out.  Mother and Katherine headed back to the Midwest…alone.   As young as she was, Katherine felt her Mother’s loss, pain and fear.  She felt abandoned and the loss of her father left a hole in Katherine’s heart.  Without her father, she needed her mother to be okay but she was not.  By the age of three, Katherine became a caretaker, a Rescuer.  She spent the next 50 years of her life trying to rescue many people (her parents, grandparents, siblings, the men in her life, her children and friends who showed signs of needing her.  She reacted to triggers of “need” at the expense of her “Self”.

According to a survey (2011) on adverse childhood experiences by the National Survey of Children’s Health (NHCS), “almost half the children (in the United States alone) have experienced at least one or more types of serious childhood trauma”, such as the example above. This translates into 34 million children nationwide.  According to a Substance Abuse and Mental Health Services Administration (SAMHSA) report (2011),

60% of adults report experiencing abuse or other difficult family circumstances during childhood.  The studies go on to say that childhood traumas (i.e., physical, emotional, and sexual abuse; neglect; violence; and natural disasters) cause many adverse effects in adulthood (i.e., increases in depression; alcoholism; drug abuse; suicide attempts; heart, liver, and pulmonary diseases; fetal death during adolescent pregnancy; high stress; uncontrollable anger; and family, financial, and job problems). The effects of these events are long-term, powerful, and cumulative.  They are also often invisible to health care providers, educators, social service organizations, and policymakers because the linkage between trauma and problems later in adulthood is concealed by time, the inability to “see” the process of neurodevelopment, and the effects of the original traumatic events, which may not become evident until much later in life.1

Many people with adverse childhood experiences live in a Disempowering Drama Triangle (DDT).  See Figure 1 below.

The drama triangle is a psychological and social model of human interaction in transactional analysis (TA) first described by Stephen Karpman, in his 1968 article “Fairy Tales and Script Drama Analysis”. The drama triangle model is used in psychology and psychotherapy. (Wikipedia)

David Emerald’s book, The Power of TED, offers simple clarity about Karpman’s disempowering triangle and the empowering antidote for it – TED (The Empowerment Dynamic).  See Figures 1 & 2 below. 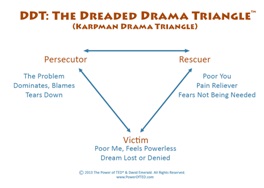 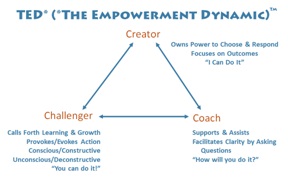 While TED (Figure 2) offers antidotes for all three drama perspectives (Figure 1):  Persecutor > Challenger; Victim > Creator; and the one we are focusing on here is Rescuer > Coach.  The persecutor, victim and rescuer all reside in a victim orientation while the Challenger, Creator, Coach reside in a Creator Orientation.

Given the statistics for the numbers of people who have experienced childhood drama and are living in the disempowering Drama Triangle and if Coaching is the antidote to Rescuing, it is important that Coaches understand the basic dynamics between these two psychological dichotomies to determine the place their Clients currently reside.  Then guide them to awareness and eventual shift from disempowerment to Empowerment.  This paper is meant only to provide the basic information on this subject and the reader to decide if s/he wishes to learn more.  Many resources are available to learn more both in book and digital forms.

Let’s review some definitions of Rescuer and Coach:

one who saves or frees from confinement, danger, or evil. (Wikipedia)

Certainly saving someone who is in real danger is a heroic act.

The Rescuer as any person or activity (such as an addiction) that serves to help a Victim relieve the “Pain” of Victimhood.  The Rescuer helps the Victim “numb out.”  Despite having helpful intentions, the Rescuer reinforces the Victim’s “Poor Me” by adopting a “Poor You” attitude, which serves to increase the Victim’s sense of powerlessness.  This renders the Victim dependent upon the Rescuer for a sense of safety – a bond forged by the Victim’s shame for needing to be rescued and cemented by the Rescuer’s own fear of abandonment or loss of purpose.

Quite the vicious circle.

Partnering with individuals in a thought-provoking and creative process that inspires them to maximize their personal and professional potential. Professional coaches provide an ongoing partnership designed to help clients produce fulfilling results in their personal and professional lives. Coaches help people improve their performance and enhance the quality of their lives. Coaches are trained to listen, to observe and to customize their approach to individual needs. The coach’s job is to provide support to enhance the skills, resources, and creativity that the client already has.

As the antidote to a Rescuer who reinforces the powerlessness of a Victim, a Coach views others as being creative and resourceful.  A Coach sees each person he relates to as a Creator in her own right, and seeks to support her in the process of creating outcomes. A Coach guides clients toward the Creator orientation by asking questions that help clarify envisioned outcomes, current realities, and possible Baby Steps.  A Coach dares a Creator to dream and discern the pathways for manifesting her visions.

Through powerful (intuitive) listening and questioning, coaches can guide clients to “shift” away from the disempowering drama triangle into the empowering triangle as demonstrated in Figure 3 below. 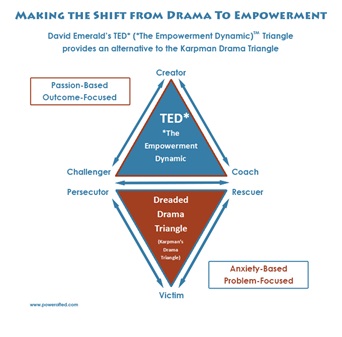 Remember the story about Katherine in the beginning of this paper?  Katherine repeated dysfunctional patterns of behavior (over the next 50 years of her life) most of the time wavering between Victim and Rescuer (i.e., dysfunctional relationships and exhaustion from trying to rescue everyone, never saying no, always trying to please and make everyone happy).  She had received many “messages” from her inner knowing during all of those years to change her behavior.  But, she didn’t know how to change until she was forced to stop.  Katherine was let go of her high level position at the company to which she had dedicated herself to for over 25 years.  She was completely devastated and lost.  Through writing and reading books that came to her, therapy, yoga, meditation, and coaching, she has gained awareness and accepted her new reality.  She has forgiven herself and her persecutors and has developed healthier relationships.  Through many Baby Steps, Katherine was able to shift her perspective from Victim/Rescuer to Creator/Coach.  She found her “Self”.

(David Emerald has given me permission to use any and all materials he has published.)