Getting ready for a weekend away or a vacation can be so much fun.  Wondering what to take, thinking what you will need and then packing it all into a suitcase. Comfortable shoes, beach shoes, dancing shoes, that little black dress that you may need, the warm jumper in case it gets cold, the bikini in case it gets warm and anything else you can cram into that case.  Ok so you have to sit on the case to close it and when you get back home you realize that at least 50% of what you have taken was unworn and therefore there was really no need to take it.  How much lighter your suitcase would be if you packed it with just your toothbrush, change of underwear and just one set of clothes for the following day?

The advantages of doing this would be considerable:

Can’t vs Can as a Power Tool

Before we start packing these cases let us look at these two words “can’t” and can”.  Have you ever considered how it is possible that a 4 lettered word like ‘can’t’ creates such limiting and restrictive actions for many people and how frequently it is used? Often this simple 4 letter word is used hastily out of habit without even considering if you can.  Can’t sometimes is used as a brick wall or a shield to prevent you from trying new things.  Sometimes we use the word can’t out of fear, denial or lack of wanting to do a particular task or experience. All of the reasons for using can’t are very restricting and prevent change and development.

Some examples of using can’t are:

In contrast can is a positive word and offers endless potential. 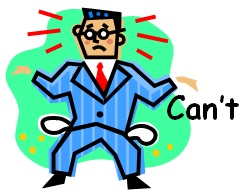 Changing the pattern of behavior

In a first grade class room children were making potatoes wedges.  One of the children started whining to his teacher telling her

I can’t do this (at this point they hadn’t even tried!)

Before the teacher could say anything, one of his fellow class mates approached this child and simply said

Why don’t you put can’t in your pocket and give it a go!

The child stopped whining and looked at the other child who had given him this information. The boy had expected that the teacher would indulge him by whining and allow him to remain inactive.  By simply changing the pattern of behavior that the boy was expecting – his overstuffed suitcase had suddenly become lighter.  To the teacher’s surprise without another word being spoken, the boy picked up the tools he had been given and gave it a go.  The boy found that by changing his pattern of behavior and giving it a go instead of whining about it was so much fun.  He was so pleased with the result as he was able to produce potato wedges like the other children.

Definitions of the words can’t and can

According to the Oxford English Dictionary the definitions for these 2 opposing words are:

Knowing and accepting one’s limitations in life is one thing; hiding behind the word can’t as a method of denial is another!  Without doubt in some factual situations the word ‘can’t’ is used correctly.  In others it is just a word that prevents us moving forward, changing direction or grabbing every opportunity with both hands.

As human beings we realize that our bodies are designed to be able to perform a variety of tasks.  However we are all aware that there are limitations to what our body is capable of doing.  For example it can quite factually be said that”

I can’t swim under water for long periods without breathing apparatus.

This statement is not one made out of denial, fear or want of trying!  Just simply factual, the human body is physically not designed to stay under water without air.

However if the statement was changed to:

I can’t swim under water

This ‘can’t’ statement could have been said out of fear, having been forbidden to do so before, anxiety at being under the water and getting trapped or maybe simple the person has not learnt how to swim!  In this scenario the word ‘can’t’ has created a brick wall for the person.  They are in a state of resistance and are unable to see potential opportunities or ways around this hurdle that has been created.

Transforming Can’t to Can

Let us consider what we may pack in the overstuffed and heavy can’t suitcase and the lighter can weekend bag.

An elderly gentleman, named John was adamant when his daughter left to move to America that unless she travelled back to her home country, she would never see him again.  His comment was I can’t travel all that way!  What did he really mean?  What was preventing himgrabbing the opportunity to experience a new opportunity?

Having asked these questions it became apparent that John’s can’t suitcase was very overstuffed and he had been carrying it around for a long time!

The main reason John’s can’t suitcase had been overstuffed was through fear.  He was afraid of flying, he didn’t like closed in spaces, and he is unable to swim so the thought of flying over water for so long worried him.  He believed that flying was unsafe and had frequently told his wife they can’t go on holiday if it involves a long flight.  He realized that as a result of him saying

it did in fact upset and restrict those family members he loved most – his wife was desperate to go, however she would not make the trip without him.  Carrying this can’t suitcase caused friction between him and his wife, which did not make him happy. Although he has medical problems, his doctor actively encouraged him to do this journey.

Once these questions had been asked and answered honestly by John, his can’t suitcase was repacked to a much lighter can suitcase and he found solutions.  His fear was overcome by his doctor prescribing some relaxant medication for the journey, it was pointed out that there are more accidents on the road than in the air.  The fear of not being able to swim and travelling over so much water was eased by and that if the plane were to go down in water; he would have a life jacket to wear which would help him to float and to be able to swim.   His nephew also added input into his Can suitcase, by telling him that John’s sister and her husband had always wanted to make a sentimental trip to Malaysia, but had always filled their suitcase with can’ts – we can’t afford it yet, we can’t because the children are at school, we can’t because we have medical problems, we can’t because we are too busy in our life at the moment. When her husband died suddenly the chance to repack her can’t suitcase to make it a can suitcase and take this trip with him was lost.

So by reframing the problem for John and helping him to unpack this overstuffed Can’t suitcase John has now visited his daughter and her family twice.