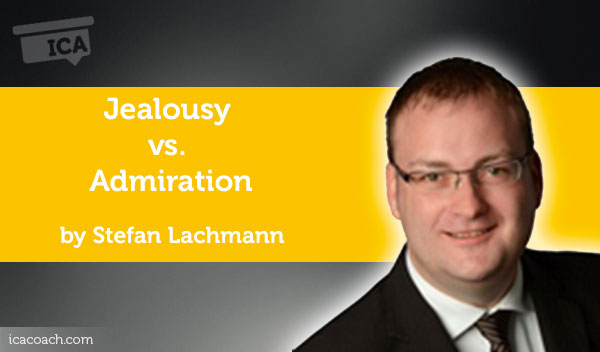 Have you ever been jealousy before? I have. Several times in my life and I still notice myself being jealous about people who believe to perform ‘better’ than I do in my area of expertise. How dare are they telling me that I am wrong and that I have not thought about another perspective?

Actually… they do not tell this to me. It is my inner voice telling me that I need to feel bad, now and that I am wrong with my initial thought.

Jealousy is an emotion, and the word typically refers to the negative thoughts and feelings of insecurity, fear, and anxiety over an anticipated loss of something of great personal value, particularly in reference to a human connection. Jealousy often consists of a combination of emotions such as anger, resentment, inadequacy, helplessness and disgust.

In fact, negative feelings are involved in a jealous moment. When I am jealous, I do not feel empowered, but disempowered. I do not feel engaged, but distracted. I generally cannot concentrate myself except of on my inner voice telling me what is wrong and how to blame the person I am jealous about. 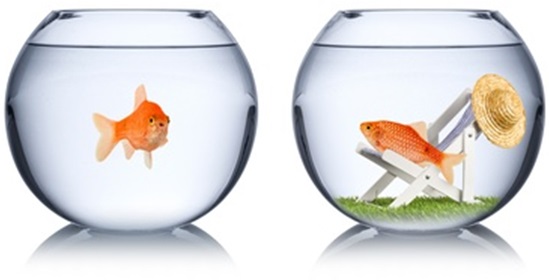 Don’t be jealous. The amount of water is the same.

How about admiration? When did you admire a person for something the last time? I do this very often as well. I admire my wife for managing our family so well. Being a fresh daddy and managing my own start-up business in parallel is challenging. But my wife knows exactly what our little baby girl needs and I admire her for that. I learn a lot from her which makes my life easier.

According to Wikipedia, admiration is indeed defined as followed:

Admiration is a social emotion elicited by people of competence, talent, or skill exceeding standards. Admiration facilitates social learning in groups and motivates self-improvement through learning from role-models.

In contrast to jealousy, I feel very good in an admiring state. I am focused to learn from the person I admire and this allows me assimilating the skills and knowledge by that person much faster. In fact, admiring people puts me into an empowered state which allows me developing myself. Can you do this? I admire her for such flexibility.

So, where is the difference?

Considering jealousy and admiration, the chemical development in our body is similar. Both are emotions based on an action by others. The distinguishing factor, though, is about judgment. Do I see the positive or the negative in that action? It is a shift in perspectives. To take on an example by my fellow-student Helene Genillard:

When a baby cries we could see in two ways: it is to show his sadness (negative) or he releases his body’s tensions as he cannot walk yet (positive)

I am working as a trainer and I really enjoy delivering trainings and to develop people. When I perform trainings on strategic management, then I feel very comfortable with my topic.

Now, if I get challenged by a colleague who is also a trainer in this matter, and if the colleague disagrees with my point of view, then I can either feel jealous or I acknowledge him for his point of view.

If I am jealous, then I do not accept his perspective and I lose the opportunity to learn from him and to develop myself.

If I acknowledge the colleague for his point of view, then I may keep it open whether I agree with him or not. But I thereby try to avoid such negative jealous feelings to arise.

However, I can also admire the person for his point of view. By doing this, I go beyond acknowledgement and establish an empowered state for my own development. Admiration thereby leads to an open mind – open for development.

Indeed, it makes perfect sense to shift the perspective from a disempowered jealous state into an empowered admiring state. Powerful questions are a useful way in order to make the shift happen. Invite the client to explore the jealous state on a content based level by asking:

What is it that you dislike about the situation? What makes your uncomfortable leading into this disempowered state

This will allow the client to deal with the content of the action rather than about the emotions as a result of such action. Afterwards, invite the client to explore potential role models in his or her life. Who is it they look up to, i.e. admire? Exploring the past can be helpful here. As kids we generally look up to people and admire them. What kind of feelings have been involved at that time, and what people, fictional or non-fictional, empower the client just by thinking about the role model? This again puts the client into an empowered state during the coaching session and opens up to take on the shift in perspectives by asking:

So, what have you learned from the action which you actually consider to be negative?

This puts the client into reflection mode.

Jealousy, even if considered to be a disempowered state, can be a very powerful experience. It often shakes up people. The inner voice talking is not always wrong. Maybe there are some underlying beliefs involved that come up to the surface when jealousy is experienced.

The same applies to admiration. Admiring people is wonderful, but make sure to keep a critical perspective as well. Even role models are just individuals with their own mistakes, so a critical reflection should be encouraged.

The jealous are troublesome to others, but a torment to themselves. William Penn