My Power Tool is called Focus vs Fluster. It follows the reframing of a perspective by taking the consuming, frenetic and frazzling feeling of being flustered, and presenting an alternative of the cool empowering clarity that comes with focus.

Feeling occasional nervousness and anxiety is regarded a non-medical condition and an occupational hazard of daily life. Web MD1 cites occurrences such as problems at work, taking tests, or important decision making as typical causes of such occasional anxiety which can leave us feeling nervous and flustered in the moment. For the purpose of this Power Tool definition it is important to clarify that it is this form of occasional, coachable, and non-medical anxiety to which this Power Tool is addressed.

Feeling flustered can be an internal state of chaotic confusion. It is an irony that in a world where we spend so much time not being present in the moment we are forced to experience the moment in great detail under a bout of emotional agitation when feeling flustered.

Feeling focused is about feeling centered and capable. Focus is logical and strategic; a plan, an action. The process of having a plan in action is empowering and provides the degree of control necessary to tame the feeling of being flustered2.

To find focus we must first find purpose, and ask ourselves:

Elise is sitting in a corporate waiting room ten minutes before her job interview is due to begin. Her palms are sweating, her heart is thumping, her stomach is churning, and she is frantically trying to remember everything she wants to remember for the interview…and failing… She is also wondering why she even bothered to come. It’s bound to go wrong. She can feel it…

When Elise applied for the job two weeks prior she felt very different. She felt calm yet excited. She planned her application with detail and took joy in the process. She felt confident that she was a great candidate for the job, having the preferred education, experience and work ethic outlined in the job description. She knew she was respected and liked by superiors at her current position and that her references would be strong. She felt within every right to propose herself for this next step in her career. She sent her application and thought nothing more of the matter until she received a phone call inviting her to interview.

The week of waiting between receiving the call and finding herself in the interview waiting room saw increasing fireworks of fear erupting in Elise’s daydreams. What if she wasn’t ready? What if she was wasting their time? What if she froze and couldn’t speak? What if… What if…?

What had changed? The focus Elise had felt when she applied for the job had changed to fluster.

Elise felt confident during the application process where she could apply the facts of her experience to her truth in knowing her relevance as a candidate. The shift from her empowering perspective came when the mystery surrounding the interview began to fester in her imagination.

Elise fluffed the interview. She rode the bus home afterward feeling despondent and frustrated, and over analyzing the proceedings. She knew she would have been a great choice for the job. She knew she had everything the employers were asking for. She also knew it was unlikely she would have the opportunity to show it because she had spent the interview in a state of fluster, too consumed with anxiety to process the interviewers questions, and subsequently unable to respond because she hadn’t heard the question.

Elise was annoyed with herself for falling foul to fluster. She went home, ate a pint of Ben and Jerry’s Phish Food ice cream, drank half a bottle of Sauvingon Blanc, sent seven regrettable texts to her ex-boyfriend, and cried herself to sleep still wearing her interview outfit. She woke up the following morning with the indentation of her cell phone on her left cheek, several text messages she was afraid to open, and a dripping ice cream carton upended on the lap of her new Rick Owens pencil skirt.

The Ladder of Inference.

In the 1990’s Business Theorist Chris Agris developed a tool that allows us to view the impact of our assumptions on the framework of our facts. ‘The Ladder of Inference’3 uses a ladder model to view how what begins as ‘Reality and Fact’ can morph through our own selected reality, interpreted reality, assumptions, the drawing of our own conclusions, and resulting adjusted beliefs, into actions based a few steps (or several rungs) away from the actual (and original) reality.

This can cause a belief that seems valid, but that is rather lost in translation, having leached heavily from our personal backlog of experience and perception. 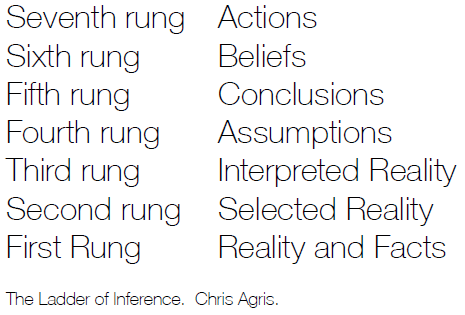 We climb the ladder without realizing. It is one of those freaky mind things that happens when time and emotions mingle. When aware of the potential of this process we can intercept it and prevent it, or acknowledge our emotional contributions to the resulting ‘truth’.

When you’re already at the top rung…

Climb down slowly by unpicking the rungs one at a time and asking yourself where these beliefs, conclusions, assumptions come from.

A key strategy to counter feeling flustered is to incorporate meditation, mindfulness and breathing exercises into daily life.

Further self enquiry could include the following questions:

1. What are the facts?
2. Why is this important to me?
3. What could be done to gain greater clarity and to feel a sense of control?
4. Where is my self doubt coming from?
5. What do I want?

And to remember to:

6. Nurture your self-belief.
7. Recognizing your fluster triggers and how non-serving they can be.
8. Prioritize facts and elements within your control over tempted imaginary catastrophes.
9. Reframe your perspective towards clarity and not confusion

When developing focus in the face of feeling flustered its good to remember:

10. Your current emotional response can be trained into one that serves your better.
11. You are the expert of your life and should treat yourself with the recognition that you deserve.
12. When you focus your mind on fact and potential you reduce the self-destructive temptation of imagining the worst.

Over time you can build a blueprint of your fluster trigger sources and an awareness of the impact of non-serving emotions that don’t need to be part of your life.

Often writing the situation down can present clarity and perspective. Adding action4 by way of a
purposeful plan can also increase clarity and focus.

Elise took a new approach for her next job interview. She followed the same method as before in her job application, but also took time to acknowledge herself for reaching the level of education and experience that allowed her to make the application. When she received the call inviting her for an interview she decided to learn from her previous situation.

She asked herself why the interview process had caused her to fluster and was surprised to discover that it wasn’t that she didn’t believe she could do the job, she just didn’t trust herself not the ruin everything when put on the spot in the interview under pressure. Elise recalled several times in the past where she had felt under pressure and said or done things that she felt awkward about afterwards.

Deciding that it was not her fate to frizzle under pressure, Elise embarked on a mindful routine of daily meditation and daily self acknowledgement of her abilities.

She practiced daily anchoring exercises where she imagined herself in the interview feeling calm and relaxed and poised to answer all questions with confidence and self assurance.

She decided to regard the interview process as a project, and approached it as she might any other project. The feeling of action and not leaving things to chance empowered Elise.