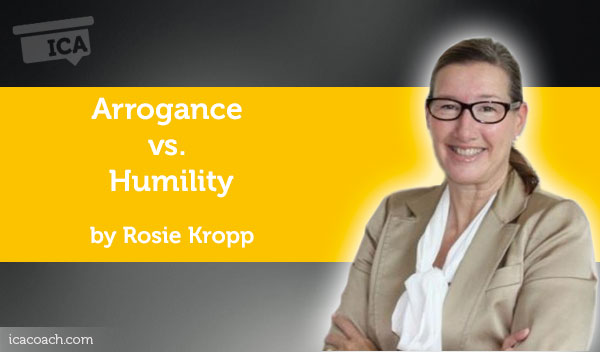 On a daily basis we constantly interact with other people, some of who we know very well and some that we do not know at all–‐or only know on a very shallow level –‐like the cashier in our grocery, the bus driver or the mail man.

How we interact with other people–‐our attitude, body language, behaviour and words–‐will reflect and trigger a reaction in the other person as well as in our selves. The way we are perceived will create a memory that stays in the other persons mind and as the story goes: first impression lasts.

Sometimes we find that we act in a way that is not aligned with our values and perception of ourselves. This can cause negative feelings in others and us. Reflection on our actions is important in order to understand ourselves.

Understanding Who I am and how I Want to be perceived is important for personal development. If I know this, I can then align my behaviour, attitude and actions to my ideal image of myself.

Arrogance and humility are two powerful behaviours that can trigger a cascade of emotions in people and it is important to find a good balance as well as when to behave in what way. Both behaviours can be efficient in different situations as long as you are true to yourself and your purpose. Understanding and controlling those emotions is a way of understanding people and values.

Arrogance is in everything I do. It is in my gestures, the harshness of my voice, in the glow of my gaze, in my sinewy, tormented face.

Arrogance is often explained as an offensive display of superiority or self-importance, a kind of overbearing pride. 1) Being arrogant means having or displaying a sense of overbearing self–‐worth or self–‐importance. It can also be seen as marked by or arising from a feeling or assumption of one’s superiority toward others: an arrogant contempt for the weak.2)

Self–‐confidence or pride can sometimes be mistaken for arrogance, especially in some cultures where “the Law of jante” exists. This can be explained as a pattern of group behaviour towards individuals within Scandinavian communities, which negatively portrays and criticises individual success and achievement as unworthy and inappropriate. 3) In Those countries mentioning your individual success is perceived as “bragging” And showing arrogance, no matter of who you are and what your intent is. In Other cultures, such as the US, You are taught from an early age to show self–‐confidence and talk about your achievements. That Is seen as something positive and people encourage each other towards success.

Self–‐confidence is a fantastic asset, same as with intelligence, but it has to be used with discretion and tact. If you try to impress people on how self–‐confident or intelligent you are it will likely be seen as arrogance. However, if you use those great gifts to inspire people around you, it will be perceived as something positive.

It is worth looking at some distinctions on confidence vs. arrogance. Both involve believing in one’s abilities but they often stem from two different roots. Arrogance is often underplayed by insecurity and an arrogant person tends to be arrogant to compensate for areas of weakness that distress the individual. A Confident person finds the root of their confidence in self–‐acceptance and accepts their weaknesses or faults, even though they may not like them. These are key points when understanding confidence vs. arrogance. 4)

In arrogance, natural self–‐confidence goes wrong or is perceived in the wrong way. Arrogant People tend to not see any weakness in themselves but can always find flaws in others. Arrogance Attempts to fill our inner emptiness with ego rather than allowing that emptiness to blossom into humility. If we can allow ourselves to be at the same level of importance as others: not higher, despite our gifts, and not lower, despite our defects—Just ordinary – It will be the antidote to arrogance and its second greatest fear: to be an ordinary person. 5)

A Great man is always willing to be little.

Humility is the quality of being modest and respectful. 6) It means, to show respect and deference toward other people, thinking and behaving in a way that treats all people the same that no one is more important than you, and no one is less important. It also means to have a modest and unassuming in attitude and behaviour and feeling. 7)

Humility means that the person doesn’t consider himself superior or inferior. He doesn’t need the attention of others to make him feel good about himself. He does something without even taking credit for it. He keeps an open–‐mind because he knows that he doesn’t know it all. He knows how to be in other people’s shoes. He Remains the same and treats everyone the same whether they are an emperor or a beggar. He Understands suffering. Money and power are not considered as success but rather to feel bliss is the real success. He knows that everybody wants to love and be loved. Being Humble is being modest. You’re not arrogant or prideful. You’re humble. 8)

The Humility of a warrior is not the humility of the beggar. The Warrior lowers his head to no one, but at the same time, he doesn’t permit anyone to lower his head to him. The beggar, on the other hand, falls to his knees at the drop of a hat and scrapes the floor to anyone he deems to be higher; but at the same time, he demands that someone lower than him scrape the floor for him.

A Humble person lives a selfless life while learning about other people and how to meet their needs in all ways. This Means intellectually, spiritually, philosophically, and even materially. A Humble person leads by example and has absence of pride.

In today’s society it is sometimes hard to focus on humility due to the constant encouragement of competition and individuality. However, Confidence without Competence is a dangerous combination, which can lead to arrogance and therefore self–‐comparison, is key to measure true personal progress. Confidence In combination with humility will give the balance leading to more positive perception.

The Last year’s global crisis has seen a rise in unemployment, bankruptcy and civil unrest. Each Day in the media, it seems that somewhere, some corporate executive is under fire for unethical or even criminal wrongdoing. We have experienced unprecedented greed and arrogance from a group of people that behaves like they are above the law. This Is due to failure of corporate and society control mechanisms as well as a lack of ethics and morale among both leaders and followers. Often it is explained with arrogance and lack of humility, but is it really that easy?

At the moment there is a movement in the world that insists arrogance, greed and selfishness don’t have to be the hallmarks of business. It’s a model of business management that’s catching on with corporations today, called servant leadership. 9)