As a coach, you are in a remarkably free situation. You have the luxury of remaining detached from whatever outcome the client achieves. It really doesn’t matter. You want the client to get an outcome, which will make a positive difference in their life, whether it is greater clarity or a workable solution, but you are not attached to any one path.
Jenny Rogers, Coaching Skills A Handbook 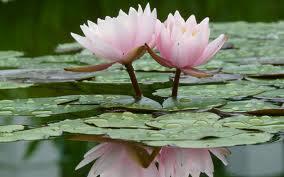 The  lotus is a one of the most perfect metaphors for my power tool “Attachment vs Detachment”…Rooted in marshy waters but does not allow even a drop of water to stay on it!

The  dictionary meaning  of Attachment is:

A bond, as of affection or loyalty; fondness.

Detachment on the other hand  is

freedom from prejudice or partiality.

Attachment is something we all have. Anybody & everybody around  us has an attachment to something and /or someone. There are a lot of emotions when we say attachment.

Love, fondness, prejudice, may at times bind us & many a time does not allow us to see how the whole process works.

Detachment on the other hand  is an emotion that helps in the ability to be unbiased. Personal judgment does not mar the thought process. The mind is always at peace.

The  Popular Indian epic Mahabharata is a story of brothers’ kids fighting to get what is rightfully theirs.  War is declared between the cousins.  Just before the war begins one of the most powerful warriors amongst them Arjuna  is completely lost in the wave of emotions & can see everyone in the enemy camp as a relative rather than as part of the opposition he is out there to destroy. With Krishna as his charioteer starts some of the finest coaching lessons through the “Bhagavad-Gita.”

A fine example of how a coach can help a coachee who is completely attached  to those he has to fight against  & through the course of the 700 profound verses empowers him to move to a state of detachment.

A mother is definitely attached to her children. At the same time her ability to detach would be if she does not expect that the children reciprocate the same & help at old age. Though  this seems a practical challenge to many, it is important to understand that children have their lives as well. Letting them go gives them a choice. If you watch animals nurture their young ones, it is pretty evident that they are attached. We have heard incredible stories of animals  looking after other species as well. A remarkable trait of parenting they have is the ability  to let go once the young ones are independent enough. No clinging, no feeling of guilt & absolutely no expectations. Completely detached. No wonder animals  are in a calm state most of the time.

Practically,  if there’s ATTACHMENT, there are invariably EXPECTATIONS. So it is natural that when there are expectations there are disappointments. It is here that emotions take over. Seeking complete detachment is tough but not impossible. For instance, you are very focused in your job & attached to the job that you are doing…you are expecting something in return.   A promotion is denied to you while somebody who is not as good is chosen for it. He is not only promoted but also given priority over you.

A tough task but you can identify it when:

You no longer are enthused about work. You are constantly asking “Why ME”? Everybody seems to be doing only wrong to you. Everyone seems so artificial & nothing seems to connect!

Understand “This too shall pass”.

A powerful statement Lao Tzu wrote in the Tao Te Ching is,

When you realize that all things change, there is nothing  you will try to hold on to.

The  moment you understand that nothing lasts forever, you LET GO.

No longer does the attachment seem to take over. You no more are disturbed by it.

A state of calm pervades because it is easy to understand that this is beyond your control. Sometimes this could be the presence of ego so spotting it becomes prime.

Watch emotional state; answers to these questions may help:

A surgeon being detached helps. He is not unconcerned, but with his child there is a sense of identification, which is absent if, it is somebody else. Sometimes if it is your issue then it is tough.

It is often compared with learning to play a musical instrument; we cannot expect to play a masterpiece on our first attempt, but the more we practice the more melodious and harmonious our music becomes. In the same way, the more awareness we can bring to our attachments and detachment strategies the weaker becomes their hold on us and the greater the experience of harmony  and liberation in our life.

The  coach has to attach to the client in listening to him & empathizing.  Detached from the emotional state & be in a state of controlled emotions with a stable mind listening to not only what the client is saying but also implying.

Only from this state can the coach take the client forward. This  is the process of empowerment.

The  power is in the shift that is going to happen.

What starts off as an emotional issue completely attached deep down with the client now starts shifting.  Detachment is something, which will seem a challenge. People however can sometimes see the other perspective. Coaching skills such as visualization can be used.

Powerful questions can also make an impact. Simple ones but powerful ones such as: