In fact, cognitive studies show that it is “natural” to focus on the negative (Kaufman, 2007). This is

Filtering: focusing on the negative details of a situation and filtering out all positive aspects. (ICA, 2009, p.3)

Various practitioners (Gordon, 2008, and Orem, Binkert, and Clancy, 2007) found that in organizations, clients became discouraged as more problems were uncovered using a problem diagnosis approach. Because of the focus on problems, their clients sometimes couldn’t think beyond those problems.

Problem solving is limiting and slow – it is deficit-based, and by paying attention to deficiencies, we magnify them, creating scarcity-based thoughts, language and beliefs. Problem solving focuses on the past, on underlying causes, and excludes possibilities for creativity and innovation.

Appreciative Inquiry (AI), begun by Cooperrider and Srivastva in the 1980s, was a reversal of the usual problem-solving approach in organizational development. The focus was placed on leveraging an organization’s success (rather than failure), creating a total paradigm shift (Gordon, 2008). With AI, clients are viewed from a different perspective–rather than one of being a problem to be solved, they are perceived as unique individuals who are naturally successful, doing many things “right” (rather than “wrong”). AI sees the world as a place of endless possibilities, where innovation and creativity thrive, as individuals are motivated to acknowledge themselves and turn their dreams into reality.

With positive psychology, the positive and valuable aspects of the present situation are appreciated. There is a focus on exploration and discovery – of new and innovative ways to handle the situation.

Self Application (How I use for myself) 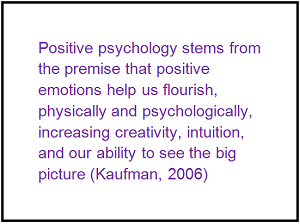 Appreciative language does not come naturally, even to coaches. Initially, the authors of Appreciative Coaching (Orem, Binkert and Clancy) had difficulties trying to become comfortable using appreciative language (especially when faced with clients wanting to discuss their problems). The authors didn’t like using words such as: status quo, goals, skill gaps, action plans, preferring the use of appreciative words such as potential, affirmation, dreams, images (2007, p. 193). They don’t like to have a “goal” for the session, as they believe this word has possible failure connected with it. They prefer the use of the word “topic” which is at least neutral, and denotes that it is something to be investigated during the coaching session.

The focus for these self reflections is how you can set a positive context for yourself: