There are different learning stages that we go through which are: 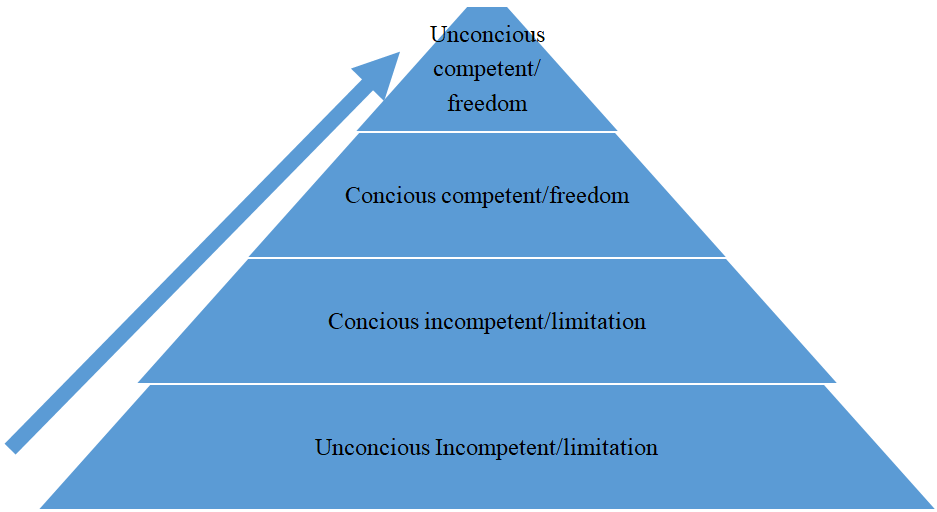 When you dwell on the meaning of Unconscious Incompetent. It means that you are not aware of your lack of ability, which is equal to say you are limiting yourself from reaching your fullest potential.  The role of the coach is to guide the coachee in order to reach to the last level which is Unconscious competent. In the last stage you are acting unconsciously but with awareness of your skills abilities and freedom of your limitations.

When we face a problem in our life, we go through different stages which are:

So, let’s say there is a negative person and that person lives his/her life not knowing that he is negatively looking at all situation as bad luck and going against him/her. This person is at the first stage which is Unconscious incompetent. He/she is limiting him/her self without being aware of doing so. When that person discovers that he/she is negative then he/she moves to the next level which is conscious incompetent. In this stage, the person is aware of his negativity but still doesn’t know how to deal with it.

When the person starts asking many questions and discovering different depth regarding his/her negativity, This behavior moves him/her to the next level which is conscious competent. This means he/she is freeing his/herself from the limiting belief and the negativity.

When the person keep repeating the healthy habits of being positive, live it and practice it. Then the conscious mind will embody it as a habit. As soon as a habit is established at this level, then the person will never have to do it consciously again and he/she will be unconsciously competent and gain control of his/her feelings.

The role of the coach at each stage:

In this stage the coach need to help the coachees to become aware of their limiting belief. The coach may ask questions like:

What do you think the cause of this problem?

What makes it as issue?

Help the coachee find a pattern that always get him/her in the same problem.

What is stopping you from reaching your potential?

In this stage, the coach help the coachee focus on his goal by asking question like:

What can you do to reach your potential?

The coachee need to have a mind shift that could help him/her practice the new learned habits and experience the freedom of their limiting beliefs.

The coach need to acknowledge the coachee for reaching up to this level and being able to get through all the struggles along the way. The coach need to help the coachee to be away from complacency and always stay in check with his/her feelings, discomforts and believes.