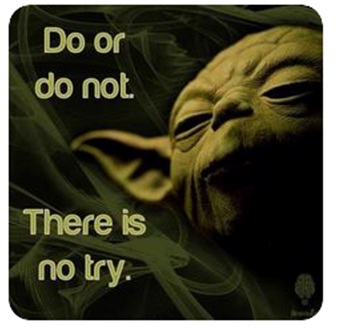 Yoda stamps his foot in irritation.

YODA: So certain are you. Always with you, it cannot be done. Hear you nothing that I say?

Luke looks uncertainly out at the ship.

LUKE: Master, moving stones around is one thing. This is different.

YODA: No! No different! Only different in your mind. You must unlearn what you have learned.

LUKE:(focusing, quietly) All right, I’ll give it a try.

As human beings, we find ourselves in the situation of “trying” and “doing” constantly.

How many times we decided to finally lose those few kilos, or go to the gym we are already paying, start looking for a new job, or finally clear up all the garbage in the garage, just to give some examples.

And how many times did we succeed to do what we so zealously set up to do? If the answer is a few times, then let’s think about it; what came in between?

Usually what comes in between are beautifully packaged excuses which to us sound so real that sometimes they become undeniable facts…and yet the diet has not started, the gym subscription is not used, the garage is not cleared.

“I wanted to start the diet but in the office, they offered cake for John’s birthday, I simply could not say no”.

“I tried to go to the gym the other day but when I left the office it was already late and I could not miss the deadline”.

Even with the best intentions swirling in our head, when we come to the physical act of doing what we promised ourselves, then we simply don’t. The reasons might be multiple: we are not fully convinced that this is what we want, we are doubting ourselves, or simply we see the task as uncomfortable and we avoid it. What is behind it? In this case, the power of words we are telling ourselves: “I want to go to the gym tonight despite deep in my me I already know I have a deadline and I am already behind”, is more powerful than the action itself of picking a pan and jotting down a plan sorting the deadline out before the end of the working day so that the gym cannot be missed.

When the approach of “trying” vs. the one of “doing” sets up a mental pattern of try and (possibly) fail, then we start an avoidance pattern (because failure hurts) which makes the tasks we would like to solve look even bigger than they are. The first step to getting out of the pattern is to understand what the Triggers are. Fear, guilt, shame, self/others judgment, not believing in him/herself, underlying beliefs, just to name a few.

To unlock the client from the power of “try” which leads to failure and avoidance and shift his/her perspective to the power of “do” my coaching model T.W.I.S.T. (Trigger Ways Igniting Systematic Transformation) comes to application.

Once the client acknowledges that s/he has a pattern of avoidance and identifies what are the possible Triggers then the next steps are to identify the Ways which have, until now, prevented to take action to a specific situation – the gym, starting a diet, look for a new job. Is the goal unachievable, or is it not fully relevant, or how does s/he feels when this happens, and what is the reason is happening are just some of the questions that may arise in this phase. In this stage, the power of the words is battling vs. the power of actions. The awareness starts to kick in and so is the shift of perspective from the client.

Identified the root causes of what was preventing him/her to act then the Igniting phase comes into play. Now the client has the majority of the elements, which will allow him/her to ultimately shift from “trying” to “act”.Awareness kicks in fully in this phase and the learning for the client starts to be more tangible.

The next phase is called Systematic. In this phase, the client identifies what actions s/he can put in place in order not to sabotage him/herself to achieve the goal. What might be the roadblocks is also explored. A timeline on when to act is also set.

In the last phase – called the Transformation – the client acknowledges his/her results and learning so far and understands that the T.W.I.S.T. is a circular process, which can be applied each time another “try” comes to the surface.

It is possible that we need to play and replay Yoda’s quote within our head or just put a “ringing bell” when we say the words: I will try.

As everyone is different, we need to choose what works best to remember it next time it happens.

What is behind the word “try”à fear, guilt, shame, judgment, not believing in ourselves, underlying beliefs.

What is behind the word “do”à empowerment, learning, awareness, going beyond (self-imposed) limits.

Try is not measurable, only what is done can be measured.