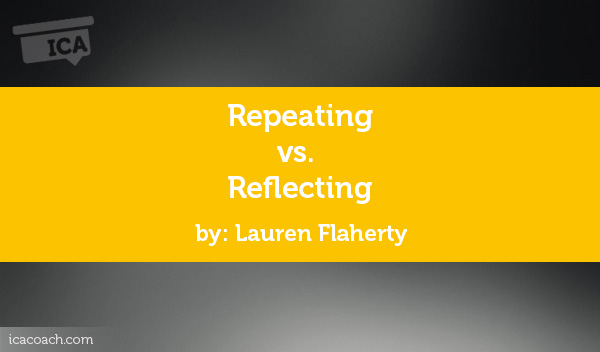 As we enter the world of coaching, we are given a lot of information right away. Often times in mentor coaching when we are just beginning, we try and use skills that we have absorbed in other classes through learning and observation. We are told to “use the language of the client” as we listen and share what we are hearing both through their words and through their tone.  As new coaches we often listen so intensely, taking notes on the exact wording, that we miss out on what our client is actually saying.  We are so busy trying to capture the exact word or phrase that we don’t hear the entire message. We miss the pauses, the hesitations, the laughter, the drop of a voice. As we are busy repeating, we miss the reflection.

Repetition is used in school often to convert an idea into a skill. It is used when learning an instrument to get technique so ingrained that it almost becomes responsive, reactionary and robotic. People often use repetition to learn something in a way that they don’t have to think anymore, it becomes automatic.  Teaching Mathematics is a great example of valuable use of repetition. When learning times tables, students are often tested on how quickly they can remember the answers. The answers are often sewed into the fabric of the brain through the process of repetition. This act of committing these equations to memory is important because these are problems that do not change, the answers are always the same.  The students want the same outcome each time they solve these problems.  This is not the same in life.  In life, our client is in search of a different solution–so this begs the question, when is repetition actually valuable in coaching?

When repeating in coaching, the purpose is to let your clients know you are listening to what they are saying, to make them feel heard. You use their language to create a shared connection, a shared understanding.  We are taught that repeating a clients’ language back to a client when sharing an observation will make the client feel like you really get what they are saying; like you really get “them.”  But does repeating language actually create this shared connection?

How many times are you in the process of multitasking while talking to a young child? When the child quizzes you and says “you weren’t listening, did you hear what I said?” aren’t you often able to repeat the last word or phrase that the child used?  We can actually pull those messages from our short-term memory—repeating exactly the last word or phrase the child has issued verbatim.  But the big question is -did we actually hear the child at all?  Is repetition proof that a child has been heard?  That a client has been heard?  Is repetition an important experience when coaching?

Repeating exact language while coaching is a small part of creating a space where our clients feel heard. Clients do need to feel that connection and hearing their own language is certainly part of that but what a client really needs is more than their own language, what they really need to feel understood is a snapshot of their moments.  And the best way to capture these emotions is through reflection.

What is a reflection? What does it actually mean?

According to Merriam Webster, reflection is “a thought, idea, or opinion formed or a remark made as a result of meditation.” It is also “consideration of some subject matter, idea, or purpose.” The words that sing to me are thought idea and consideration.

When a person looks in a mirror, they are not looking at their appearance for the first time. There is a history.  They look at themselves and see the eyes they have seen before; the hair they have brushed and dried and primped. They have experiences to draw from as they stare at their reflection. They remember when they have looked their best and their worst.  This history is what makes them judge their appearance on any given day. They remember when they looked their best and felt their worst.  It is what makes them notice a new line on their face, a sparkle in their eye or their hair cooperating and doing just what they want it to do.

In coaching, the coach is often the client’s mirror. The coach partners with the client to share what the client is saying and how they are saying it. The coach almost acts as a processor. The client shares all their feelings, hopes, dreams, worries and fears and the coach processes the information and gives it back to the client, almost the same way a mirror delivers an image-through reflection. However, the beauty of coaching is that the client gets the reflection after the information has been processed which allows them to see what they are feeling, thinking and worried about as it is reflected back to them.  The coach is the clients own private observer—trained to listen for the nuances in their tone, the waiver in their voice and the language they carefully choose.  The coach reflects on all of these observations and presents the client with a picture of themselves. Sometimes the picture looks familiar, other times foreign, but through the familiar and through the unknown, the gift in the reflection is self-discovery.

The client often hears what they have said from another angle. The coach shares observations, patterns, pauses, maybe even double clicks on some nervous laughter. In turn, the client gets to focus and reflect on what they are experiencing in a new way.  As a coach partners up with the client and uses this act of reflection, the client often gets the chance to shift their perspective which in turn allows them to grow.  This simple photograph is often just the image they need to begin on their journey into action.

Consideration is defined as careful thought, typically over a period of time. It involves deliberation, contemplation and most importantly reflection.  Reflection in coaching is the most valuable gift one can give. Often times clients are feeling things so intensely, they feel stuck. There is simply no other way for them to process their feelings and emotions on their own.  Every time they think about their situation, they come up with the same conclusion. When they talk to friends or family about their concerns, they continue to process in the same way.  Friends and family frequently give the same advice-they tend to be predictable.

Because the coach and client are in a dance with one another, the experience is unpredictable. The coach follows the clients lead—consideration is key.  The coach and client have a goal for the session, but just like in dancing, the steps can change, a new dance choreographed, a new masterpiece created.  As partners, they are in it together.

Jenna is a manager at a PR firm. She left the workforce for ten years to raise her family and was recently hired to work in this firm because of a connection she had through a family friend. She manages a team of three people who (she believes) seem unmotivated, has little attention to detail and does not value her as their manager. Jenna does not trust her team and is constantly checking up on them, setting up meetings to go over their work and feels constantly let down.  She believes that any mistake they make is a direct reflection on her and she constantly fears the failure of herself and her team. She thinks she is a good manager some days but feels inadequate on other days. The days she feels “bad” at her job, she questions why she was put into her role and is certain that her team will find out that she’s not an effective manager.  She has been effective at managing in the past but believes that since she has been out of the workforce for a significant period of time and doesn’t have an MBA, she is not valuable.  She wants to be perceived as a visionary and often has good ideas, but she constantly undervalues herself because of her underlying beliefs. She hires a coach to help her with her imposter syndrome.

When the coach uses repetition in their session, Jenna gets frustrated. She finds the session to be mechanical and unhelpful.  The coach notices her irritation and halfway through the session changes her approach to more observation and reflection. The coach notices that Jenna is managing her team the way Jenna would want to be managed but asks Jenna if she has ever asked her team about their goals and objectives. Jenna begins to realize that she doesn’t know her team at all. She has never asked them what they actually want.

Jenna’s story is a powerful one because not only was the coach helping Jenna to reflect on her own approach to management, the coach was reflecting on the session itself. The coach took the time to notice Jenna’s frustration with the management of her team but also with the coaching session itself. The coach took the ego out of the equation and worked to truly connect with Jenna.  This simple act of reflection gave Jenna the discovery she needed to shift her way of thinking and subsequently her management style.