Most Business and Corporate Executives have been very adept, skillful and comfortable with running organizations, implementing projects and managing people. They were good at what they did and this was reflected in their own individual success – a sort of validation, so to speak. But if they did a deeper introspection, there was little that they would have done in managing themselves –understanding their true life purpose and intent, their values and underlying beliefs, and their own confidence in trusting themselves. Viewed from this perspective they would have discovered they were relatively quite ignorant.

Since   school   days   we   have   been   conditioned   that   knowing   and   memorizing information – be it in languages, the arts or sciences as the cornerstone of our success. Distilled to a finer degree this is what manifested in us as awareness. Thus awareness to many of us meant information – knowing the facts, and what was going on in the world.

If you were on top of these facts you were considered well informed, intelligent, aware. Thus, in the midst of all the noise and cacophony in our existence we lost the true signal and vital information lying within our own selves. Worldly knowledge, while necessary, by itself is not awareness – knowing our own selves and who we truly are is.

What the Wise Say

Osho  uses  the  word  “awake”  to  amplify  awareness  and  his  observations  on  the subject. Here is what he says.

One of the most important things to be understood is that man is asleep. Even while he thinks he is awake, he is not. Just by opening the eyes don’t befool yourself that you are awake. Unless the inner eyes open  – unless your inside becomes full of light, unless you can see yourself, and who you are- don’t think you are awake.

How true? – let’s look at our own lives – most of us are on auto pilot and being driven rather than driving –always doing rather than being.

Where is the time in the constant activity of an endless information seeking society to be truly awake?   We are all sleep walking victims in a cause and effect world – constantly reacting rather than responding.

The same still applies to the human race today. Our constant search for information and knowledge has put our own consciousness into the background and thus our own self awareness.

This is not to say that information and knowledge is superfluous – it is necessary for our existence and to be an enabler for other material pursuits to address the basic human needs as defined by Maslow – but deeper awareness is necessary for us to go down into our own subconscious and attain our true aspirations.

Men are as forgetful and heedless in their waking moments of what is going around them as they are during their sleep” In sleep you are not aware of what goes on around you, but in your waking hours are you aware of what goes on around you? Much research has been done. Ninety eight percent of messages coming to you, your mind never allows to enter – 98% percent! Only 2% enters and that 2% the mind also interprets. The net result is one becoming judgmental and being trapped in one’s own beliefs – the first step to ignorance.

This is powerfully summarized by Lao Tzu, the ancient Chinese philosopher who said:

This is what interpretation and judgment in our minds lead to  – ignorance!

One recurring question of those seeking awareness is “ Who am I? “

Lin-chi, the Chinese philosopher has this to say:

Here are Seven Levels of Awareness in a Business/Executive Coaching Context. There are perhaps more – but these will go into the spiritual realm (not in the scope of discussion of this Power Tool) 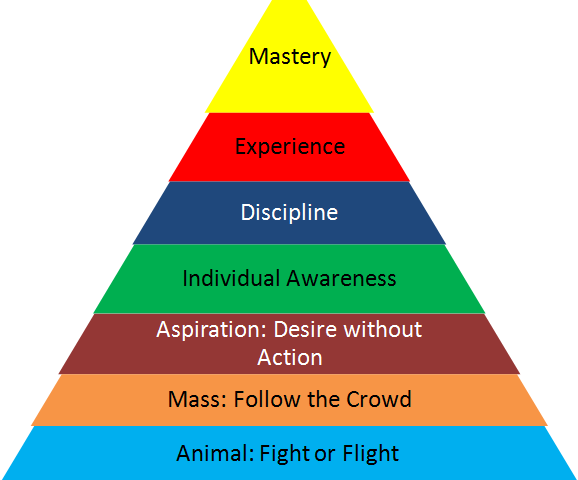 All  of us  will  be  operating  at  one  or a  combination  of these  levels. Our  ultimate awareness aim is to attain the mastery level.

Here are some brief descriptions of each

The highest form of ignorance is when you reject something you don’t know anything about. Wayne Dyer, American psychotherapist

The Dictionary describes ignorance as a state of being uninformed (or lack of knowledge). Ignorance is also described as witlessness and the word ignorant is an adjective describing a person in the state of being unaware.

There is an interesting observation that individuals with superficial knowledge of a topic or subject may be worse off than people who know absolutely nothing. Charles Darwin stated:

The Wikipedia further states that ignorance can stifle learning, in that a person who falsely believes that he or she is knowledgeable will not seek out clarification of his or her beliefs, but rather rely on his or her ignorant position. He or she may also reject valid but contrary information, neither realizing its importance nor understanding it. This concept is elucidated and captured in Justin Kruger’s and David Dining’s work:

Unskilled and Unaware of It: How Difficulties in Recognizing One’s Own Incompetence Lead to Inflated Self Assessments otherwise known as the Dunning – Kruger effect .

The  bigger  problem  with  ignorance  is  not  in  ignorance  itself  but  in  “Choosing  to Ignore”. This could be described as Willful Delusion. The purport here is that matters which are obvious are sometimes ignored, not taken into consideration. This phenomenon is not limited to  persons with basic knowledge and ability, but people in positions of high power and authority. This can even extend to the highest level of human governance resulting in nightmarish scenarios that could, with more wisdom, have been avoided.

Let me illustrate with an example. Hitler’s Nazi party – there was no compulsion to belong to it. But a country like Germany- one of the most educated, cultured, sophisticated and advanced – a country that has given the longest list of philosophers, a long line of thinkers and important philosophers of that age – fell victims to an absolute mad man. Even Martin Heidegger, considered being the foremost thinker in that country, fell victim to Hitler’s lunacy. It’s not that Martin Heidegger was not aware – he chose to be ignorant.

In  the  WW  2  Nuremberg  trials,  many  of  Hitler’s  top  men  (most  of  them  highly educated) simply said that they were not responsible, and they didn’t feel guilty. They were simply being obedient, doing what  they were told to do, and they did it with as much efficiency (and ruthlessness) as they were capable of. Again, they were aware of their actions and what they were doing but they chose to ignore. Many of these were good people – but were heads of concentration camps! They were good fathers, good husbands and good friends. Nobody could conceive that the same “good “people were murdering thousands of Jews every day. They chose to ignore…

Satya is a successful Business Executive. He joined a leading and successful MNC as a Plant Accountant and rose through the ranks to the position of Financial Controller – a resounding career success by any standard. Satya was a whiz at financial numbers and analysis and his virtuosity in this area won him many accolades, recognitions, and rewards. But Satya has a basic problem with people – he is a poor delegator and micromanages all of his key people as well as people down the order. He is very uncomfortable in strengthening his department by recruiting competent and senior people from outside due to his own insecurities. Satya’s life revolves only around his work and he expects the same of his people. His organization in the company is the most de-motivated and de-energized. The company does an Employee Opinion Survey every year and Satya’s department over the last many years  consistently gets the lowest scores. The Company leadership, HR and Satya’s boss have for many years strongly advised Satya to change his management style to set this right but to no avail. Satya is completely and fully aware of what his employees think and what he needs to do but he is choosing to ignore. He does not believe this is important as he is doing well in his career. But the bigger issue, and therein  lies the rub, is that the Company bosses are equally aware but they also  choose to ignore. Satya is, perhaps, more important to them than the employee satisfaction of the entire staff in the Finance Department. The Employee Opinion Survey has thus been reduced to a meaningless ritual as both Satya and the Organization play only lip service and persistently choose to ignore.

Deeper  introspection  of  our  self  awareness  can  help  us understand our  levels of awareness and ignorance better, and shape our thoughts and actions to lead more enriched, fulfilled and happier lives

Awareness has to begin with the individual and requires a deep dive within one’s true inner self. Some thoughts…..

People go through complete careers following the crowd and replicating other’s lives and their achievements measured by the accepted norms of monetary, business and career success, and the recognition that comes with it. The Business/Executive Coach is thus provided an immense opportunity to open a client’s eyes and make them “awake” to see and know their true inner selves.

Helping  them  know  their  values,  underlying  beliefs  ,  strengths  ,  prejudices  and judgments and then to make them shift from disempowering to empowering behavior are important starting points.

People usually want to have better results and ever increasing success (success being a constantly moving target) . Their benchmarks, more often than not, are connected to their own peers – peers who have achieved greater success than themselves or role models outside, role models they aspire to emulate. Very often they get similar results because they are not aware of their own uniqueness and intellect.  By going with the herd they operate on the same level of awareness and cannot break through to higher awareness levels. In other words they choose to ignore their own capabilities and lose the opportunity to blaze their own new trails.

By awakening clients, coaches do the following……

Ignorance is the night of the mind, but a night without moon or star. Confucius