As a coach, I have had the privilege of interacting with several people, clients, and fellow coaches. Not surprisingly, from every interaction I have with a client or a fellow coach I learn something. Each person has a different story and I get new insights from each story which makes my journey as a coach not only life-changing for my clients alone, but for me as well. Not too long ago I had an intriguing interaction with a peer. In this case, I was the client. Thanks to the power of a coaching session as a client, I was able to think about this power tool based on that challenging discussion.

How a Chicken and Egg Metaphor Can Help When Coaching Perfectionists

As mentioned earlier, it was during a session that I found one of the most powerful power tools for me: egg vs chicken. Egg vs. chicken? I always experience a mix of astonishment, curiosity, and amusement when I mention it.

I like to talk about it, starting from my own personal experience.

A short while ago, I met a dear colleague for a session with me as a client. I needed to talk to someone as I was going through a difficult and exhausting patch. In that session I brought up the following topic: 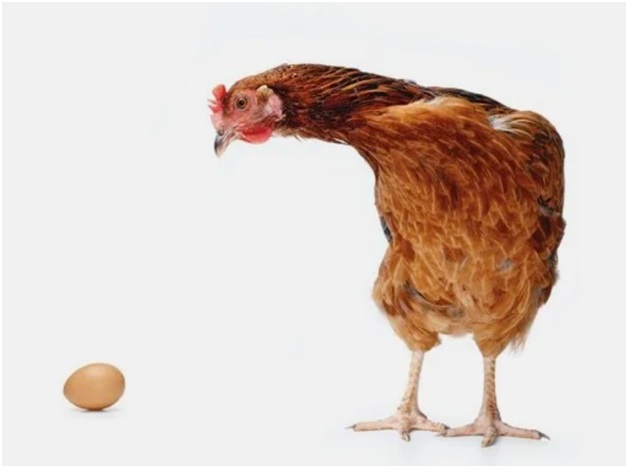 “‘I have a project to deliver in which there is no set deadline: the delivery date is up to me. In fact, I have already gone further than the date I initially set for myself, but I accept this for a whole series of reasons that I have recognized, accepted, and worked out.

Now, I am at a confusing point. I know that the work I have currently completed might be fine for delivery, it might be shipped. But I can clearly see that it could be better, indeed it should be better. I figured all the things that could be improved. In my mind, this would only require a little more time. This time would be used to focus on those areas that need improvement. This would perhaps allow me to achieve that true sense of satisfaction.”

I had to make a decision: do I move the date again and or, do I just deliver? Waiting and doing more work on the project thing would mean a possibility for me to feel that satisfaction. That feeling of a full, complete, warm, and round energy, like… an egg. In my visual mind, I saw an egg, it was there complete, I felt the pleasure of that fullness. Upon hearing my metaphor, my coach found it fascinating and, wanted to enter my world and understand exactly how I was visualizing this situation.

My coach first asked me about the full energy of the egg and I described it. Then she went on to ask about the other occasions where I had seen and felt that energy so clearly. I answered, “I think for things related to deliveries at work and at school, very few instances, maybe I can count them on the fingers of one hand. Strange enough as I say it, I feel that this is something that does not resonate with me.” I thought about it a bit more and I went a level deeper, and with a mixture of astonishment and displeasure I said, “well if I’m being honest, I’ve probably never really felt that feeling.”

That was the lightbulb moment for me, the aha moment.

“Yeah sure, I know what it is. It’s one of my recurring patterns: the famous excessively high standards. There it is again”.

I would like to reach for something that I see represented by the egg, and I already felt that nice round, full pleasure, and I knew how much I would like to reach for it. It was so pleasurable, it felt so real I could believe it. The new awareness spoke to me clearly when she asked me about the other occasions where I had seen and felt that energy so clearly: I have never reached those standards I wanted in that way that exists within me but, had never realized that it is something illusory. It is perfect. It’s not real.

“I see you smiling. What’s going on?” my coach asked.

I smiled at myself and went on to say, “I build these traps for myself. And then I fall for them. Amazing, isn’t it?” And I shook my head in disbelief, smiling. What I’ve learned about myself is that sometimes I get excessive standards and ideas that often masquerade as something attractive and real. But they are not real.

My curious coach then asked me what it would mean for me to deliver my work instead.

“To me, delivering my work would mean, going beyond, moving forward”

“What does it mean for me to go beyond and to move forward?” My coach asked.

And there it was, I saw it: a squawking chicken that would like to run free in the meadow. And I laughed. I couldn’t help but laugh. I laughed at the chicken, and I laughed when I saw it. This chicken is energy in motion. It’s new energy. And I have really felt this energy many times. And I love it.

I’m sure you are wondering what happens to the running chicken if I wait and postpone the date? Well, the chicken is impatient; she gets tired of waiting (and has already waited). She will likely get tired, and her energy might deteriorate.” So, it was clear to me: the chicken deserves attention and care. I want to satisfy her. And feel that energy.

“What are you going to do?” My coach asked me.

“I think I’ll give myself two more days to reach that standard that I have in mind (as further verification of the things that were clear to me in the session). But then, after those two days, if I don’t have that feeling of completeness (like the egg), I will send my work out, giving attention to the hen and releasing that energy.”

And so, I did. I invested two more days in improving the work. That feeling didn’t come. So, I delivered. It wasn’t the easiest thing. It was a bit like going against something strong, like forcing my nature, but I stayed focused on the chicken. And how important it was to me. After the awareness of wanting to achieve something not real, other mindful points helped me to move forward:

In addition, I also promised my coach that I would send her a picture of a chicken or egg to let her know what I had done. And making that commitment helped me. Well, as icing on the cake and confirming what I thought, a week later, came the confirmation that my work had been appreciated (despite me feeling like it was incomplete at some point)

This is the end of my story.

Egg vs. Chicken a.k.a Excessive vs. Attainable Standards

Egg versus chicken for me represents the dilemma between excessive standards and attainable standards, between unreal and real standards. It’s the dilemma encountered by so many people, in some cases even called perfectionists.

What happens to me is that often, right before delivery, a decision, a departure…what I have is never enough. I always tell myself, it could be better with the belief that with more time, I would get to the quality I want and with it the satisfaction I want. It is also important to note that this fear of failure often leads to procrastination.

Once I figured that this is what I experience, I found it interesting to analyze these two sides of the coin on different levels that answer the questions:

And they touch on different levels:

How Can You Use This Power Tool to Coach Perfectionists?

I’ve had the pleasure of being able to use this power tool in different sessions, with different clients. People who are launching a new business, or clients in a new management position or with a new challenging project. Whenever I have the opportunity, I use this power tool. The key always comes through the awareness that generally comes to my clients through these questions: What do you see? What do you feel? What do you think?

After immersing myself in their worlds, I support them in building what it takes to make a decision and take the next move. In most cases, I noticed a common pattern, and these are the main steps through which one moves:

These are also very often quick steps to take, often requiring only one session, but I find them powerful. They certainly increase self-confidence and raise awareness about the power of action and the energies that flow around it. I realized I had excessive standards the first time I became a manager when a colleague handed in a job I had assigned to her. I was stunned at the difference between what I expected to be delivered (how I would have done it) and what was delivered. And I started to work on this aspect so that I can continue to be a manager and even grow. The weakest point remains the standards I have about myself.

What happens to me is that often, just before delivery, a decision, a departure what I have is never enough. I always tell myself that it could be better with the conviction that “with more time, I would get to the quality I want and with it the satisfaction I want”. Upon focusing on that, I realized how much that energy, with the search for satisfaction that is never enough, deteriorates over time. The chicken gets tired, bored. And here’s the real problem: focusing on the unreal thing, wanting to achieve it, with the high probability of not achieving it and also losing the freshness and energy of new things, of beginnings.

A trap with a result is the opposite of a win-win.

The beauty of coaching sessions is that the coach creates a platform where you come up with your own answers. During the session, I was able to do some introspection and I realized that although I was there for a single occurrence, I have had a similar feeling several times. I also realized that I had chatted to several other people who go through the same conflict. Evidently, this is a fairly common issue. It is therefore essential to recognize and address it; hence this power tool. This power tool is one step towards dealing with this habitual dilemma.

Nevid. J. S.,  (2021) 10 Tips for Turning Procrastination into Precrastination. How to get started with getting started.  Psychology Today.https://www.psychologytoday.com/us/blog/the-minute-therapist/202101/10-tips-turning-procrastination-precrastination