As children, we are encouraged to dream. We are asked, “what do you want to be when you grow up?” Confidently, we shout out, “Astronaut! Doctor! Teacher! ….” We had no fears and we had no limits. There were unlimited possibilities. Rarely did we share a dream and the response was, “oh you can’t be that…”. Unfortunately, as we get older, limits begin to exist. Rejection happens. We are told “no this cannot happen” and dreams we had as a child no longer seem realistic.  Our world evolved from unlimited to limited.

These thoughts are best described as limiting beliefs. A limiting belief is a false belief we have about ourselves or the world that limits, distress, or hurts us in some way. It is what causes our dreams to remain, as such, a dream. With a limiting belief, the dream will never become our reality. This is a self-fulfilling prophecy known as the Pygmalion effect. Our beliefs about ourselves influence our actions, what others believe about us, and their actions towards us. In this vicious cycle, we may not be able to control what others believe or how they act, but we can control what we believe and how we act (which in turn influences others).

So what do we need to do?  All of us have a core belief system: thoughts and assumptions we hold about ourselves, others, and the world around us. Limiting Beliefs are incredibly powerful. They are negative, and often inaccurate, core beliefs that will significantly reduce one’s chances of achieving our dreams. We need to UNderstand what our limiting beliefs are. We need to shift and transform these limiting beliefs to become UNlimited beliefs.

We can break it down our core belief system (and thus limited beliefs) into three categories: 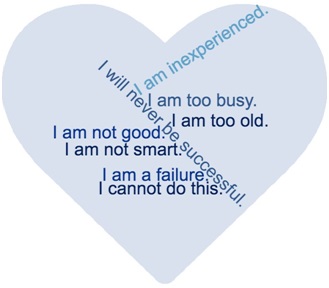 It is not bad to have self-doubt. It helps us determine a realistic assessment of our experiences, our skills, and our competencies.  It is estimated that 70% of people have at least one episode of “Imposter Syndrome” in their lives. It occurs when our self-doubt is over-inflated. For example, you were recently passed up for a promotion and a peer was selected instead. You reflect on what happened. You recognize where you lack experience. However, further doubt starts to come inside your head. You start to believe you are not smart enough and you will never be successful. You feel anxiety, doubt, and worry – even about your performance in your current role. All this self-doubt leads you to believe: “I am a failure”.

The impact of imposter syndrome is significant.  You are sitting at a team meeting. A problem is being discussed and you have a potential solution. The limited belief that “I am inexperienced” causes you to stay silent. You successfully pitched a new client to the firm and you tell yourself (your boss and anyone who congratulations you), “I just got lucky.”  These limited beliefs thus limit our actions. We stop from going after new opportunities, we set easier goals, we avoid challenges. Even when having an interest, we stop ourselves for fear of failure.

It is also important to recognize that a limiting belief could also come in the form of thinking you are the best at everything. Why is this a limiting belief and not an unlimited belief? This perception limits your acceptance of critical feedback and opportunities to grow. If you are so perfect, then what else is there to learn? 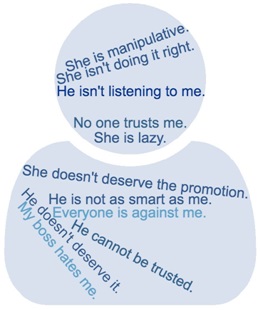 It is so much easier to blame other people for what is happening in our lives rather than to take accountability ourselves. Let’s go back to the situation where a peer was selected for a promotion. “He didn’t deserve the promotion. He got lucky. It’s because he is a suck-up. He manipulates other people into liking him.” Or perhaps, “My boss likes him more. He hates me.”

You start being wary of those around you. “She is just as lazy as he is.” A direct report doesn’t complete an assignment as you expected. “He isn’t listening to me.”

These limiting beliefs cause you to act differently around other people. It makes it difficult (potentially impossible) to develop healthy relationships. You act negatively towards others and this affects how they perceive you and act around you as well.

It is also important to recognize that there are limited beliefs about others which may seem positive. We believe everyone can be trusted and that those around us are good and ethical. The reality is that there may be those who are taking advantage of us and this type of limited belief creates a blind truth which leads us to unhealthy relationships as well. 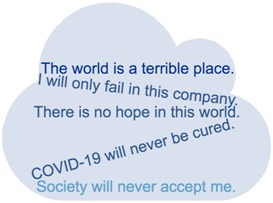 You didn’t get promoted and you believe that you will only fail in this company. The company will never promote someone like you. Limiting beliefs about the world around us deepen the belief that things are out of our control. For example, as many people sit at home in quarantine due to COVID-19, it is easy to have negative thoughts that a cure will never be found and we connect this with the belief that we cannot be happy anymore.

On the other end, we might minimize COVID-19 and believe it isn’t a serious pandemic that the world is facing. We continue to go outdoors, not wear masks, and do not wash our hands regularly. Minimizing problems existing in the world and looking through it with rose-colored glasses is also not helpful.

Some of our limiting beliefs maybe 100% true, but the reality is, it is likely that a number of our beliefs are irrational and unproductive.  It is critical to reflect on all of our beliefs and understand which are untrue and limiting our potential to live our best life.

Step 1:Identify with the client their limiting beliefs about themselves, about others, and about the world.

An exercise that is useful during step 1 is asking the client to complete these sentences:

Create sentences focused on negative scenarios and the feelings your client has. Our inaccurate narrative tends to be one that we default to when we’re faced with difficulty or disappointment.

As your client shares their reflections, note if the words are significantly more positive or negative (or is there a good balance). When does the client use the words “always” or “never”? Does your client celebrate their successes? How are they viewing their failures – as lessons for growth or creating fear stopping them from moving forwards? Are they deeply evaluating what is happening in their life, the roles of others, and the external situation?

Step 2: Explore the Origins and Impact of the Limited Belief

Has your client prioritized the limited beliefs: which one is having the greatest impact? Pick this one to focus on for this exercise (then, one at a time, complete this exercise for all other limiting beliefs). The origin exploration is aimed to widen the perspective of your client and for them to identify what is unfounded about their limiting beliefs. The client should develop a deeper understanding of themselves and how their behavior has been driven by these limiting beliefs. It is a recognition stage: a moment of reflection in the mirror and sees how their own limited beliefs have kept them stuck in the “dreaming” instead of “becoming” who they want to be. Some powerful questions you may want to leverage:

Let’s go back to the scenario where your client did not get promoted and below are some example powerful questions. For each, the objective is for the client to share as many examples as possible. For example, they share one success story with you, ask them for more. If they are sharing positive feedback they have received, ask them for more feedback from different people. Important Note: In Step 3, your objective is to crush this belief. As a coach, you need to be mindful that there is a possibility that what was believed to be a “limited belief” might turn out to be the truth (or just “uncrushable for your client). For example, the client believes this company will never promote him/her unless he/she becomes an inauthentic version of themselves.  After lengthy self-reflection, they hold strong to this belief and every comment made is in support of this limited belief. They will feel even more frustrated. As a coach, acknowledge their courage and honesty in this step. You can still move forwards to Step 4.

The objective here is to take the limited belief which is an extreme viewpoint and bring it back to reality. The objective is NOT to completely flip it to the other extreme as this can also be limiting to your client. Unlimited beliefs should be true and beneficial.

For example, in the below table, you want to avoid your client switching from “I am a failure” to “I am only a success”. The aim is for failures to not be seen as a negative experience. If they see themselves as only successful, this goes back to the concept of a limiting belief being overly positive. If one believes themselves to be perfect, they will discount, even the most constructive, criticism. Let’s go back to the example from Step 3 where after lengthy reflection, the client continues to believe the limited belief to be true. For example, “This company will never promote someone like me.” In this case, the “flip it” could be: “There is a company that will promote someone like me.” The objective is to support your client in widening their perspective to where there is an opportunity to reach their own goals/objectives.

Step 5: Define the actions to go from Dreaming to Becoming.

Now that your client has created a new belief, it is time to define the actions to move it forwards. Powerful questions may include:

Check-in on what support your client needs, but ensure they take accountability for moving forwards.

In my research, I was inspired by Nelson Mandela’s 1993 inaugural speech (this is a quote from Marianne Williamson): This power tool is intended to support coaches and clients in helping dreams become reality. All of us have had (or still have) limited beliefs that have created feelings of inadequacy, fear of failure, and a sense of hopelessness towards reaching our dreams. It is our choice to allow these limiting beliefs to stop us from becoming who we want to be. It is also our choice to crush these limiting beliefs so they stop crushing our dreams. Let’s all create unlimited beliefs.

Stop the cycle of negative self-talk

Being honest about the pygmalion effect

What old story about yourself

45 questions to break the limiting beliefs