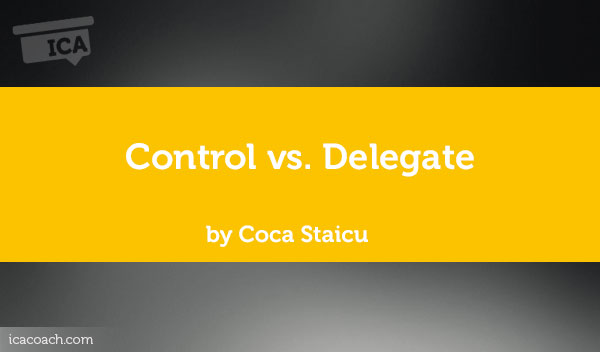 In our daily activity, we notice that one of the most common problems that managers approach in coaching sessions is lack of time for strategic activities of their company or lack of time for family. Being caught in the current problems, they get into a position in which they cannot detach from this problems, and they asked to give their agreement or to participate with solutions in the operational activities of the company to the detriment of strategic planning.

Behind the lack of time is often lack of delegation and the desire to control everything that happens in the company.

Control Freak Some of the characteristics of such a person are:

Some of the characteristics of such a person are:

A Head Pharmacist, decided ,after four years of business success due to his management style, to expand his business by increasing the number of pharmacies. In the fifth operating year, from a pharmacy with four employees, he expanded his activity to three pharmacies with 9 employees, and by the end of the sixth year he was running of 8 pharmacies with 28 employees.

As the business expanded, he became increasingly irritable with his employees, whom he accused of lacking commitment in their work, although their cooperation was the key of his current performance. On the other hand the lack of time got more acute, he was working 14 hours a day and on weekends, but still having a hard time to handle the situation, he got to the point of considering selling his business. He contacted a professional for a few coaching sessions,meant to improve his time management throughout the day.

After five sessions, we were able to detect the cause laying behind the symptom he was initially complaining, namely time management issues:it consisted in the lack of delegation of responsibilities to the pharmacist chief of the site, and the tendency to keep doing all the tasks he was doing six years ago: orders, invoices, relationship with suppliers, financial accounting etc.

After 8 coaching sessions he decided to delegate some of his responsibilities to the chiefs of pharmacies and he was assisted by a coach in this regard. Currently,this transfer process is ongoing as chiefs pharmacists take over part of the responsibilities he assumed in the past,and he finally got to balance the time he spent working with his private life and he managed to leave behind the chronic fatigue he was complaining about all the time.

Currently the sessions are focused on his fear that not everyone who had took over his responsibilities performs perfectly.

If you face a customer presenting symptoms such as of lack of time, chronic fatigue, difficulties in his relationship with family and lack of quality time spent with them,or tendency to make everything perfect, consider a dysfunction of the delegation process, that can lay from complete absence of delegation to previous unsuccessful experiences that left him reluctant for renewing this approach.
When working with such a customer, keep in mind that: